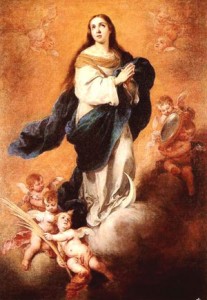 The dogma of the Immaculate Conception is unique to the Roman Catholic Church.  It is a dogma which clearly displays how theology develops over time and how we as Church come to better understand God’s revelation.

What is the Immaculate Conception?

"We declare, pronounce, and define that the doctrine which holds that the most Blessed Virgin Mary, in the first instance of her conception, by a singular grace and privilege granted by Almighty God, in view of the merits of Jesus Christ, the Savior of the human race, was preserved free from all stain of original sin, is a doctrine revealed by God and therefore to be believed firmly and constantly by all the faithful." Ineffabilis Deus, Pope Pius IX

The Immaculate Conception is probably the most misunderstood dogma of the Roman Catholic Church, even among Catholics.  It does not refer to the conception or birth of Christ.  The Immaculate Conception is the dogma affirming that Mary, the Mother of God [Mary is the mother of Jesus, and Jesus is the second Person of the Holy Trinity], was conceived without original sin.  Immaculate means “without stain” and the stain in this case is that of original sin.  What does this mean?

Mary still felt the effects of being born into a fallen world, meaning she still feels sorrow, experiences physical illness, etc.  But being born without original sin means that she was born with sanctifying grace and no concupiscence, the inclination to sin.  She was also born with original justice and original innocence.  Here is a fun way to understand it: We are born in a pit (original sin) and then pulled out of the pit (baptism).  Mary on the other hand was about to step in the pit but was stopped before she could fall in, so she doesn’t have any of the mud from the pit on her (concupiscence).

Why do Roman Catholics believe in the Immaculate Conception?

The absolute purity of Mary

Patristic fathers held Mary in very, very high esteem.  They tended to describe her as “perfect justice”, “virgin innocent”, “pure from eternity”, “exempt from every effect”, “without spot”, and many, many more.  These phrases emphasize her unique and  exuberant purity and innocence.  The Church took these into deep consideration and held them as pointing to the Immaculate Conception of Mary.

By no means does the Bible explicitly state the doctrine of the Immaculate Conception, but it does indirectly point to it.  Genesis 3:15 was read by even early Christians as a proto-evangelium or Earliest Gospel  with Mary as the woman described.  If enmity is between the woman and the devil then she could not be infected by his poison (original sin).  Furthermore, Luke 1:28 from the Bible refers to Mary as “full of grace” or kecharitomene.  This word illustrates a supernatural amount of grace.  Although these biblical references do not prove the dogma, they do illustrate it.

This blog is the first of a three-part series. Come back tomorrow and read "Basic Mariology - Part 2: The Assumption of Mary".