A brilliant biography of one of the intellectual mavericks of 20th century Catholicism - arguably the most influential man of faith in American life from the 1960's through to the 2000's. Interview with author Randy Boyagoda on his new release, Richard John Neuhaus: A Life in the Public Square.

Q. As a writer, you are known for your novels Governor of the Northern Province (2006) and Beggar's Feast (2011). What made you decide to write a work of non-fiction, and why did you choose Richard John Neuhaus as the subject?

My first novel was about a genocidal African warlord who moves to Canada and becomes a convenience store clerk. My second novel was about a runaway boy Buddhist monk from Sri Lanka who becomes a globe-trotting street hustler. At first glance, in other words, there would seem to be little connection between these stories and the story of a conservative Catholic priest and intellectual. And yet I was drawn to the life story of Richard John Neuhaus because it was filled with unexpected events and encounters, from his boyhood in small-town Canada through to his longtime prominence as a man of God, man of ideas, and man on the march, in New York, Washington, and Rome. I was drawn to the telling of his story by the great storytelling opportunity it offered, to explore, make sense and do justice to the life and times of a controversial and influential person moved by his love of God and driven by his personal ambitions both to play a major role in American public life, across decades of dramatic events in American politics and culture. 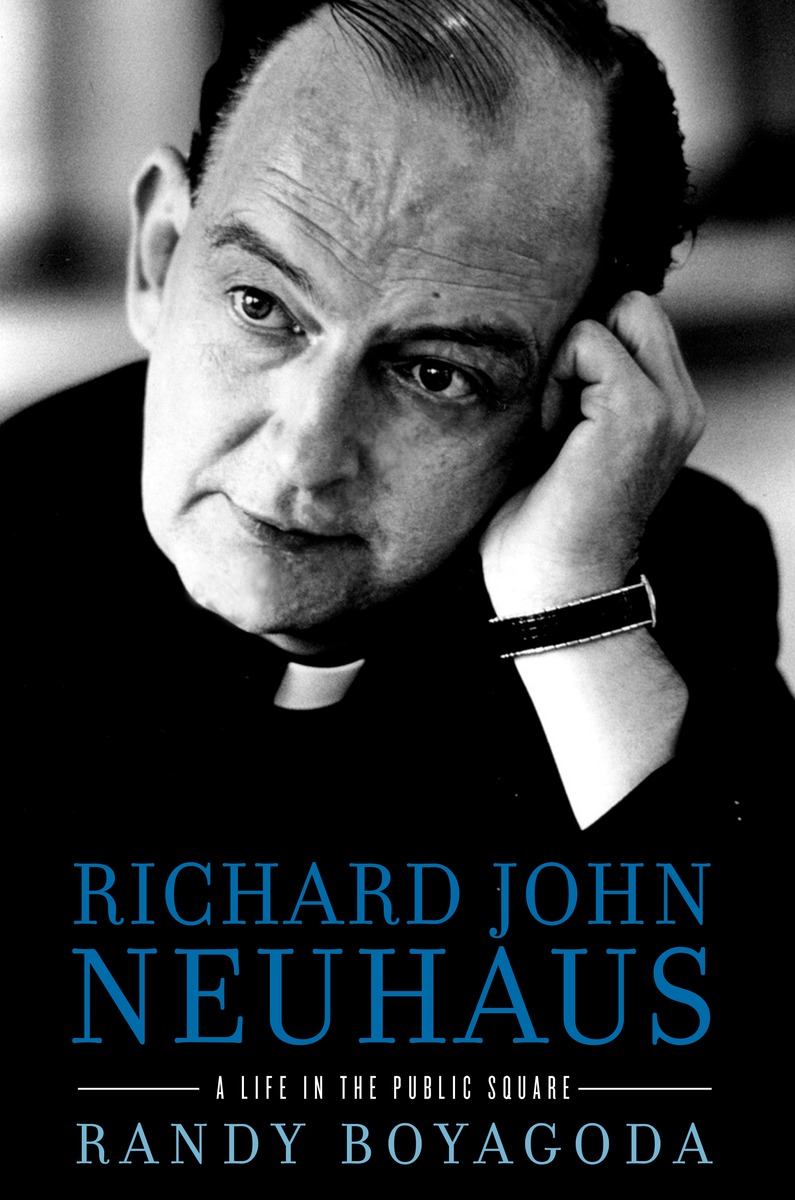 Q. This is a long book! It obviously required a great deal of research. Can you tell us a little bit about your writing process?

My wife and I have four children under the age of eight, I have a full-time job as a professor and administrator at a university, I’m constantly writing book reviews and essays for various newspapers and magazines, and my second novel was published around the world during the course of my researching and writing this book, an effort that on its own terms required multiple trips to New York, Washington, rural Canada, rural Texas, and Rome, among other places. So my writing process is basically to write whenever I can, wherever I am! Often enough, this has involved early morning sessions in my home office, in Toronto, and there was one stretch, two summers ago, where my wife and our children went to stay with my wife’s family in Milwaukee for three weeks so I could complete a major section of the book by basically working on it all day, and much of the night. I began procrastinating the morning after they left, by trying to dislodge a wasp nest on our deck, which left me with two dozen wasp bites on my arms and hands. This made for some difficult typing, but I got it done.

Q. What do you hope to accomplish with this book?

My goal was to write a book that was neither hagiography nor hatchet job. In other words, I hope I’ve told the story a heroic Christian life that was not without its mistakes, and that I’ve done so in a way that’s responsible to the fullness of his life and work, and also fine and fun to read. Neuhaus was, from the earliest possible age, a charismatic and controversial figure. In researching the book and speaking to people who knew him at various points in his life, I appreciated just how influential he was, on their own senses of what it means to bring your faith commitments to bear upon your intellectual life and your work in the world, and vice-versa. With this book, I hope to reveal the complex and rich fullness of the personal relationships and private experiences that informed his well-known public accomplishments and persona. I hope people will read this book and appreciate that whether you agree or disagree with all of the things he said and did in his life, either way you’ll recognize that he made a signal effort to live out his Christian commitments in big ways.

Q. In your opinion, what were some of Richard John Neuhaus’ greatest contributions to American public life?

I think Neuhaus made the best possible case, in his writings and actions both, that religion has a very important role to play and a permanent place in American public life. The question isn’t whether religion should be involved in politics. The question is how should religion be involved in politics. By no means do I think his particular interpretation of what these roles and places are accounts that everyone will agree with! Instead, I’d simply say that his decades-long effort to demonstrate religion’s importance to matters of public import ensured that this conversation was lively and robust, not least because of how much he inspired others to do likewise, whether in agreement with his views or in direct and vehement disagreement with him. I think he also demonstrated to many that you can be a person of serious religious faith and a person of cosmopolitan intellectual interests. Finally, and more specifically, I think he established an influential role for Catholic teaching in late twentieth century American culture unlike what it had ever enjoyed before, and likewise forged ecumenical and interfaith connections between Catholics and Evangelicals, and between Christians and Jews. He did this through the founding of the magazine, First Things, and through his various coalition-building efforts, all of which gave shape and voice once more to a serious and supple religious presence in an American culture and politics whose leading secular-minded figures might otherwise presume there was no need or place or even possibility of this kind of presence.

Q. What do you think were some of his biggest mistakes?

Oy. What a question to ask the biographer. Every word I write here is more rope for his biggest fans and/or his biggest haters. Readers of the biography will know I’ve identified mistakes for sure, mostly concerning the gap between what he believed he was doing at various points in his life, and how his efforts were understood and experienced by others. For more details, please consult the biography!

Q. Why is it important for contemporary Americans, and perhaps Canadians, to know about Richard John Neuhaus?

It’s very important to know about someone who was arguably the most influential man of faith in American life, from the 1960s through to the 2000s, from antiwar left to neoconservative right, from conservative Missouri Synod Lutheranism to conservative Roman Catholicism. Here was someone who marched with Dr. Martin Luther King, Jr. and breakfasted with John Paul II, someone who was roughed up by Chicago police during 1960s street demonstrations and advised presidents on public policy. He also inspired many young people to vocations to religious life, led a thriving inner city black congregation in Brooklyn, and held court most Friday nights at his Manhattan apartment, sipping bourbon, smoking cigars, and talking ideas until the wee hours. Across all of this, he understood himself and his work, foremost, as inspired and ordered to and by his love of God and the Church. That someone could have such a remarkable life, after growing up in small-town Canada and never even finishing high school, seems to me important, even inspiring, for many Americans and Canadians too to know about.

Q. Is there anything else you’d like to add?

Interview provided by the publisher

Read the Richard John Neuhaus: A Life in the Public Square biography preface

Purchase the book at The Catholic Company here.