One of the marks of a Christian, and specifically a Catholic, is bearing a crucifix.  Most Catholics tend to have a crucifix either on their person, in their home, in their car, or all three. In fact, at Belmont Abbey College (where I study) there is a crucifix in almost every single classroom. The crucifix is a constant reminder of the sufferings Jesus Christ endured out of His love for each of us, and his self-sacrificial death that restored mankind's relationship with God. Representations of the original crucifix of Christ have been crafted and used since as early as the late fifth century, and they continue to be popular today. 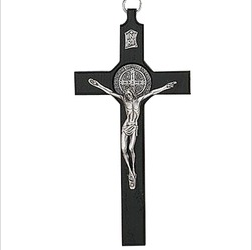 The St. Benedict Crucifix is essentially a crucifix with a St. Benedict medal in the center of the cross behind the Corpus of Christ. The St. Benedict medal is one of the older medals of the Catholic Church and is rich with Latin prayers. On the back of the medal is a cross and on the arms of the cross are the initials of a powerful Latin rhythmic prayer: Crux sacra sit mihi lux! Nunquam draco sit mihi dux! (May the holy cross be my light! May the dragon never be my guide!). One can receive a partial or unconditional indulgence with the St. Benedict medal depending on certain conditions which one can learn more about here. 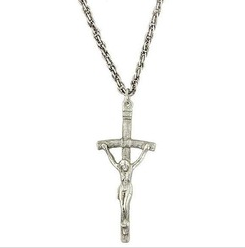 The Papal Crucifix is very unique in its design and style. This crucifix is more “ugly” than the typical crucifix as the cross itself is bending and seems to represent worn wood. Furthermore, Christ seems to be enduring serious and ugly suffering as He is hanging lower than usual with His head tilted very far down.  This can represent Christ in the final moments of agony. Many have said that this design reminds them of the weight of sin which Christ bore and also the ugliness of our sins. This crucifix, though more “ugly” than others, could also be said to be more powerful in calling to mind the great sacrifice of Christ.  It is also the crucifix most commonly associated with Pope John Paul II. 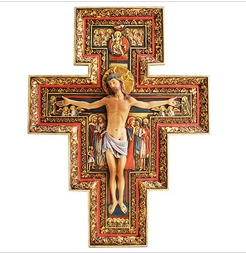 The San Damiano Crucifix is cherished by the Franciscans and was fashioned around the year 1100. It is famously the crucifix before which St. Francis of Assisi prayed when he received his mission from Christ to rebuild His Church. This Crucifix depicts Christ as both wounded and strong, surrounded by certain saints and figures in the New Testament including the Roman Centurion and his son as well as St. Paul and St. Peter.  Angels are depicted over Christ along with the Hand of God with two fingers extended, which has been understood as God blessing his Son. This style of crucifix is known as an icon cross, or icon crucifix, because it tells the story of the crucifixion. 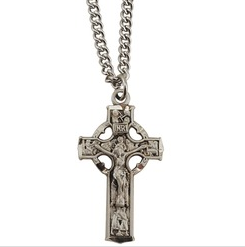 Celtic Crucifixes are one of the oldest styles of crucifixes.  The saints who evangelized Ireland, most famously St. Patrick, turned the  island and its pagan inhabitants into Christians.  Many of the ancient pagan symbols were not only "Christianized" but used as tools to teach the Christian faith.  The ancient Celts had a symbol called the sun wheel which emphasized the importance of the sun as well as everlasting life. The ancient Christian evangelizers joined the sun wheel to the Cross of Christ to symbolize Christ as the Son of God and the resurrection.  The Celtic Crucifix is usually decorated with Celtic knotwork which represented the inter-connectedness of nature.

These are just a few different styles of crucifixes which have been very popular throughout the centuries and are still commonly found today. Choosing the crucifix that touches your heart the most is not always easy, but hopefully this guide will help.  I know that whatever crucifix you choose to use, no matter what kind it is, will be a great one if it's special to you.  You can also read our blog Praying with a Crucifix Like a Saint to read how important crucifixes were in the lives of many of the saints.