Her life is a shining example of how loving and pursuing Truth has, as its final end, embracing the Cross and beholding the face of God—and how every moment along that pursuit is actually God's providence ordering each step.

Edith Stein was a strong woman with a strong mind.  Although born to devout Jewish parents, she lost her faith in God somewhere in her childhood.  She was a very bright student who eventually found her way to the study of philosophy (which means, literally, the love of wisdom) after initially studying German and history at the university.

She studied philosophy under some of the major thinkers of her time, Husserl and Scheler, both of whom, incidentally, prompted her to consider first Christianity and then Roman Catholicism.  Here are the beginnings of Divine Providence ordering her steps in a life that would eventually love the cross of Christ and end in martyrdom.

Three Grace-Filled Moments in the Life of Edith Stein

There are three distinct events in the life of Edith Stein that she marks as special moments of grace which stirred her soul and left her a changed person, which ultimately led her to willingly offer her life to God.

The first moment is when she noticed a woman who, while out shopping, stopped at a Catholic Church to kneel and offer up a quick prayer.  This simple act of devotion on the part of a complete stranger struck Edith Stein profoundly.  She writes,

"This was something totally new to me. In the synagogues and Protestant churches I had visited people simply went to the services.  Here, however, I saw someone coming straight from the busy marketplace into this empty church, as if she was going to have an intimate conversation. It was something I never forgot."

God built on this encounter with a second, more intimate one.  Edith Stein met with a recently widowed friend and was profoundly struck by her friend's great faith.  Edith Stein wrote of this experience by saying,

"This was my first encounter with the Cross and the divine power it imparts to those who bear it . . .  it was the moment when my unbelief collapsed and Christ began to shine his light on me - Christ in the mystery of the Cross."

This was an encounter that would prepare her for her own cross that she would bear later in life.

The third remarkable, grace-filled event in Edith Stein's life came when she was visiting with Catholic friends who happened to have a copy of the biography of St. Teresa of Avila.  Stein became engrossed in the book and read it throughout the night.  She later wrote of this evening by saying,

"When I had finished the book, I said to myself: This is the truth."

It was after this last event that Edith Stein converted to the Roman Catholic Church. 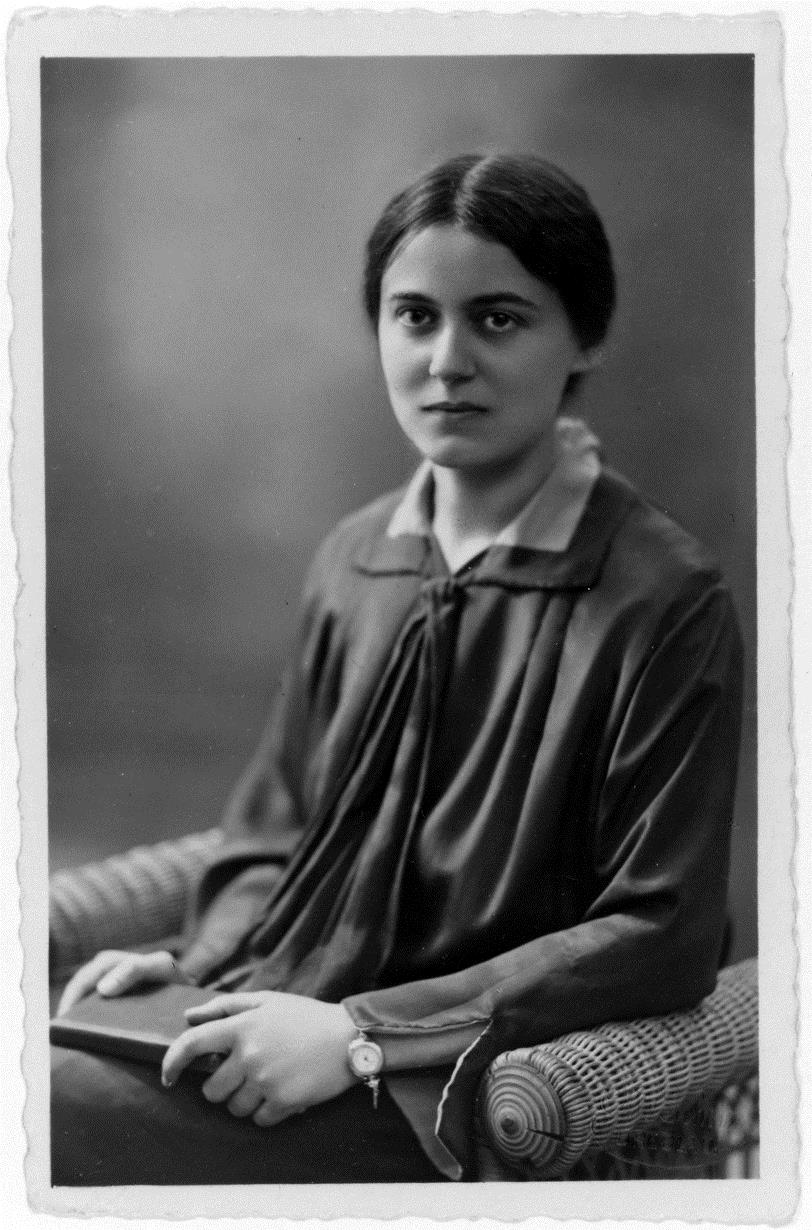 The Hand of Divine Providence

Edith Stein began to wonder at all these remarkable events in her life that led her ever closer to God and into His will for her life.  It became clear that all along it was God who was ordering her steps.  She concluded,

"Things were in God's plan which I had not planned at all.  I am coming to the living faith and conviction that - from God's point of view - there is no chance and that the whole of my life, down to every detail, has been mapped out in God's divine providence and makes complete and perfect sense in God's all-seeing eyes."

Edith recognized and embraced God's guiding hand in her life and completely surrendered herself to His will.  Here are more interesting acts of providence in her life that would gain rich significance in light of her martyrdom as both Christian and Jew:

Embracing the Cross: the Life and Martyrdom of Edith Stein

After her conversion, Stein wanted to immediately enter a Carmelite convent, but was encouraged by her spiritual mentors to pursue her promising academic career in philosophy instead.

She undertook this task of teaching and writing with great devotion, declaring that, "If anyone comes to me, I want to lead them to Him."

She wrote a number of books making her mark as a prominent female philosopher—unusual in her day—who was both philosophically Thomistic and spiritually Carmelite, who harmonized faith and reason in everything she wrote.  This she did until 1933 when the Nazi's rise to power made it impossible for her, as a Jew living in Germany, to continue her academic work.  She took this persecution as her appointed time to enter a Carmelite convent.

Edith developed a special love for the cross of Christ which she first encountered in her widowed friend, taking the name Sister Teresa Benedicta of the Cross as her religious name.  She understood that her fate under Nazi rule would be closely entwined with that of her Jewish people.  In all the persecutions she saw the Divine Providence of God, something she learned to identify in all the events of her own life.  She wrote,

"I understood the cross as the destiny of God's people, which was beginning to be apparent at the time [1933].  I felt that those who understood the Cross of Christ should take it upon themselves on everybody's behalf.  Of course, I know better now what it means to be wedded to the Lord in the sign of the cross. However, one can never comprehend it, because it is a mystery."

Edith Stein would soon have the opportunity to bear the cross of Christ on behalf of others, taking her motto after St. John of the Cross, "Henceforth my only vocation is to love."  The Nazi persecution of the Jews increased greatly.  Edith Stein was resigned to her fate and accepted it as God's providential will, with which she lovingly joined herself on behalf of others.

"Even now [1939] I accept the death that God has prepared for me in complete submission and with joy as being his most holy will for me. I ask the Lord to accept my life and my death . . . so that the Lord will be accepted by His people and that His Kingdom may come in glory, for the salvation of Germany and the peace of the world." 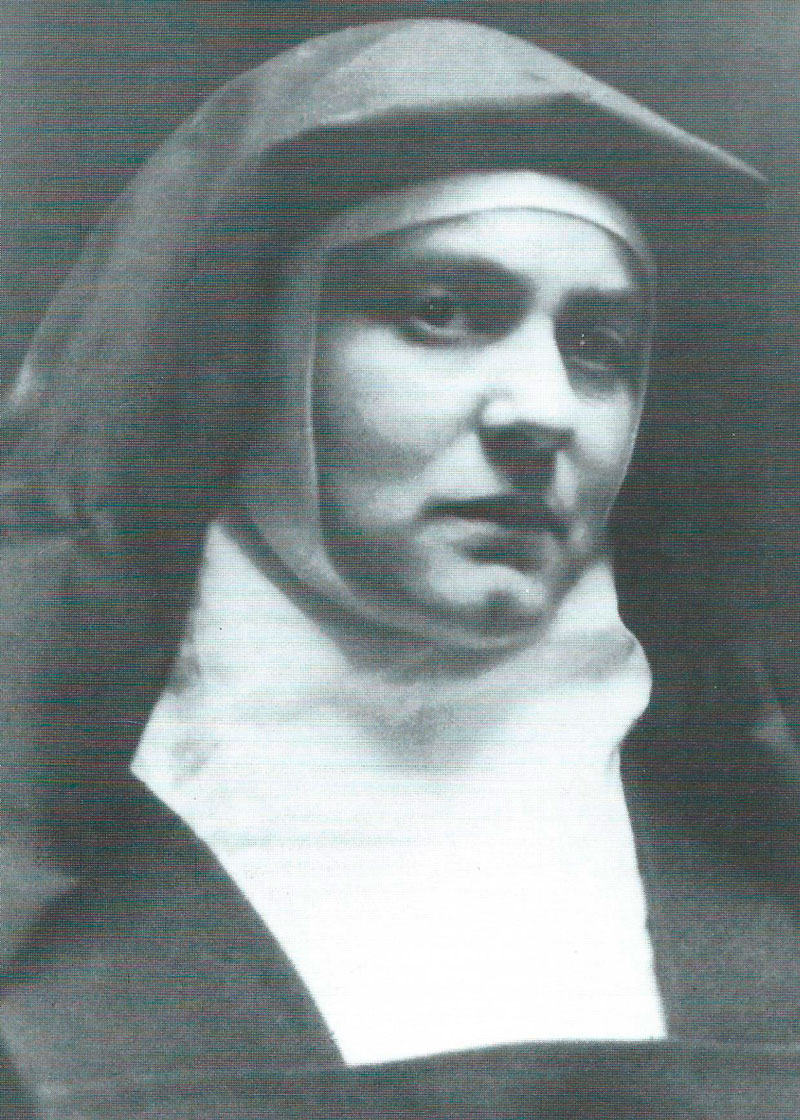 Despite attempts to hide her from the hand of  Nazi terror that reached even into the convents, Edith Stein was arrested in 1942 and sent to Auschwitz. Shortly after her arrival at the death camp she was sent to the gas chambers. At her beatification in 1987, Pope John Paul II said,

"We bow down before the testimony of the life and death of Edith Stein, an outstanding daughter of Israel and at the same time a daughter of the Carmelite Order, Sister Teresa Benedicta of the Cross, a personality who united within her rich life a dramatic synthesis of our century. It was the synthesis of a history full of deep wounds that are still hurting . . . and also the synthesis of the full truth about man.  All this came together in a single heart that remained restless and unfulfilled until it finally found rest in God."

Edith Stein's life is a testimony of God's providence and how He lovingly brings circumstances into our life—even the smallest things—that become our stepping stones to closer relationship with Him.

Do you find the life of St. Edith Stein a source of encouragement?  Have you noticed God's providential hand in your own life experiences? 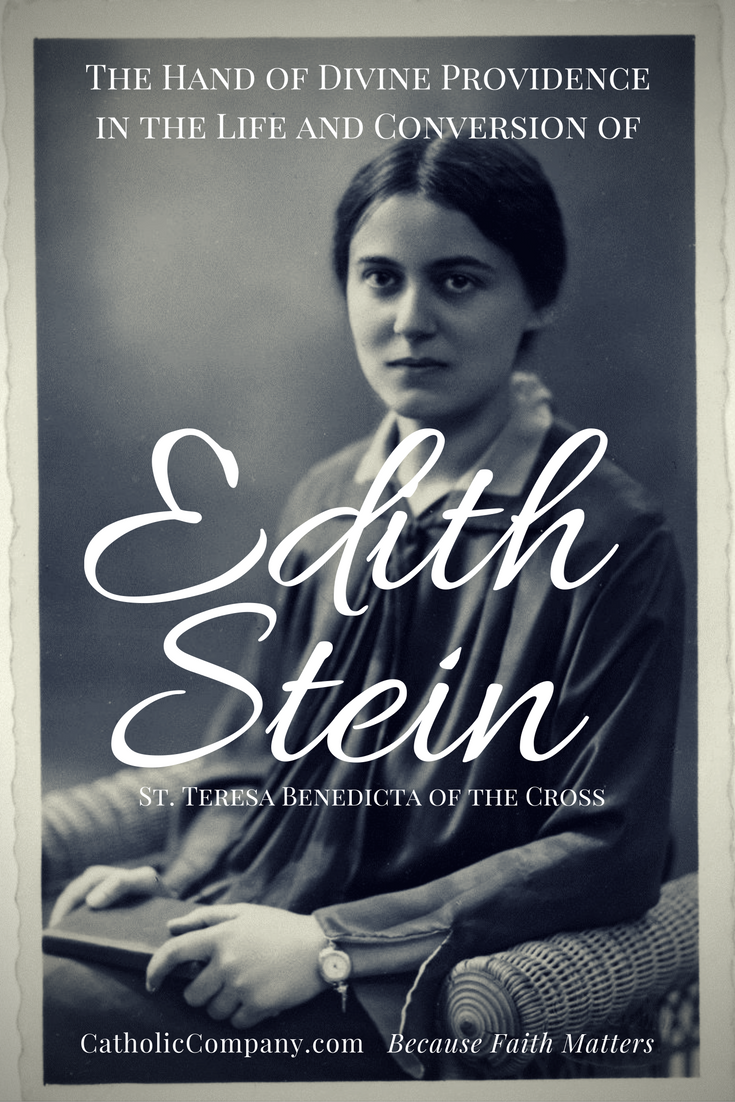