Do you wish you could have the best of Pope Francis' homilies, to date, in just one book? Look no further.

Nearly every day Pope Francis says Mass in the intimate Saint Martha chapel at the Vatican. The homilies he gives are little gems gleaming with deep insight, and now someone has collected the brightest of these gems and put them in one accessible place.

The name of the book is Encountering Truth: Meeting God in the Everyday which you can purchase here. It features 186 of Pope Francis' most heart-and-thought-provoking daily homilies.

This is not just another book about Pope Francis - this book features the Holy Father's own spontaneous words spoken as he exercises his everyday role as chief shepherd of all Christians. It is a compilation of the homily text recorded and transcribed by Radio Vaticana, complete with summaries and commentary  - and meant to be read like a daily devotional. Below you can read an interview with the editor below as well as an excerpt homily from the book. 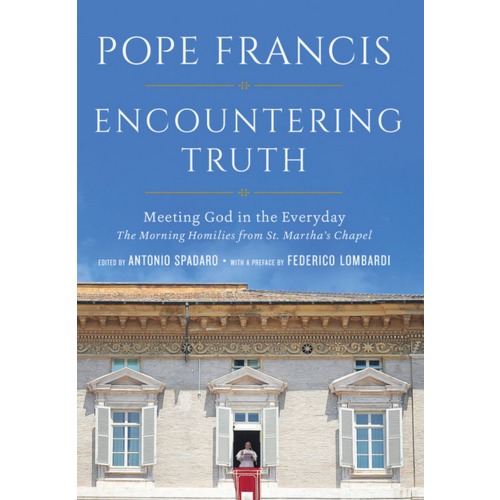 Q. How would you describe this book?

On the surface, Encountering Truth is a thought-provoking and inspiring collection of more than 180 of Pope Francis’ most personal homilies. These are sermons he has given in the simple chapel of his current residence in Vatican City. (Pope Francis has foregone the ornate Papal Palace so many previous Pope’s have called home, living instead in an austere room in a very simple building called the Domus Sanctae Marthae, or the House of St. Martha.) These homilies are intimate, simple and profound, providing a glimpse into the mind of a man who is changing the way we talk about religion, compassion, and hope.

Q. The current market is saturated with books either about or by Pope Francis, what makes this one different?

Encountering Truth is truly a unique book. I’ve worked in publishing for more than 20 years and when the manuscript arrived (in Italian), I’d never seen anything like it. As I mentioned earlier, it is a collection of Pope Francis’s homilies that he has given in this little chapel in the Domus Sanctae Marthae. But it’s more than just a collection.

First, a little background. The Domus is this rather modern looking building adjacent to the St. Peter’s Basilica in Vatican City. It’s a working hotel for visiting priests, nuns and some lay people who have business to attend at the Vatican. It’s also the place where the members of the College of Cardinals stay during a conclave to elect a new Pope.

Most people do not get to see the inside of this building, but I was fortunate enough to stay at the Domus in 2012 when I was the editor for Pope Benedict XVI’s book Jesus of Nazareth: The Infancy Narratives. It’s a simple, clean and well-lit place. I attended Mass in the chapel one morning and it was an uncomplicated affair given by a regular priest whose name I never learned. Most of the people in the pews were clergy. Now, since Pope Francis became pope he gives Mass in this chapel many days during the week. And he does it extemporaneously, like a normal priest would do at a daily mass. There’s no pomp, no circumstance. It’s just a priest (who happens to be the Pope) and a few dozen people in pews.

This is not a big event, but it is a BIG EVENT in many ways because Pope Francis opens the doors to this service to local people, blue-collars and white-collars, police officers, electricians, maids, care-workers, couples who have been married for more than 25 years. In keeping with the humbling of the Church, Pope Francis uses these services to talk to regular people. Pope Francis doesn’t use notes—the sermons are off-the-cuff—so there is a rawness to them. They’re organic. They can be a little messy at times, too. And because these sermons are essentially just the Pope “winging it,” there’s no written record of them. But they are recorded. What we’ve done—in cooperation with Rizzoli Books in Milan, Italy, and Radio Vaticana, the Vatican’s radio station—is compile 186 of these sermons into a single book.

Now, anyone who’s listened to someone give a sermon or a speech knows that there are high points, where the speaker has our attention, and low points, when the material might not be the most interesting thing we’ve ever heard. The book summarizes the core message of the sermon and then quotes Pope Francis at his most powerful moments. At first I was a bit skeptical about how this would all play out on the page—it wasn’t anything I had ever seen before—but the book works very beautifully. Encountering Truth not only gives you a sense of being present at the service, but provides spiritually digestible ideas that you can ruminate on, meditate with, and ultimately use for prayer.

Q. Were you surprised by any of the homilies in this collection? Do you have a favorite?

I was surprised at how poignant and moving these sermons were to me. Pope Francis talks a lot about mercy in this book. Those sermons were my favorite; to remind people that God is not looking for sacrifice. God is looking for mercy. Show mercy to your friends, your family, your co-workers, strangers, fellow commuters. Be kind. Be compassionate. The news headlines nowadays makes it seem like we live in a merciless society. There are definitely deep pockets of this type of behavior around the world—sometimes in foreign lands, sometimes right next door—but the majority of people in the world are good people. There are people who show mercy to others. We all need to build on that. We need these reminders that Pope Francis offers us. That’s essentially how we find heaven on earth. Show mercy, and the doors to peace and happiness are opened to you.

Q. What do you hope readers will take away from Encountering Truth?

Each sermon is no more than a couple of pages (some are a single page). For the faithful, I hope readers use the book as a daily devotional. I’d love for people to read a sermon a day over six months and allow the Pope’s words to penetrate their spirit, to lead them to prayer and reflection. For skeptics, or those have an interest in the Pope as a leader, or for those who don’t have a religion or feel more spiritual than religious, I hope it’s an opportunity to see some of the best sentiments that religion has to offer: messages of kindness and compassion, of courage and the need for positive, deliberate action. I think people from all walks of life can find something deep and purposeful in this book. Essentially, I want this book to change readers’ lives.

Excerpt homily from Encountering Truth: Meeting God in the Everyday

God is patient with our weaknesses

During Holy Week, let’s think about the patience that God has with each of us.

God’s infinite patience with man is reflected in the infinite patience that Jesus has with Judas. This is shown in the scene of the Gospel in which Judas criticizes the decision of Mary, Lazarus’s sister, to anoint the feet of Jesus with three hundred grams of priceless ointment; it would have been better, Judas says, to have sold the ointment and given the proceeds to the poor. John notes in his Gospel that Judas was not interested in the poor but in the money, which he stole. And yet “Jesus did not say to him: ‘You are a thief.’

“He was patient with Judas, seeking to draw him to himself with his patience, with his love. It would do us good to think about the patience of God during this Holy Week, about the Lord’s patience with us, with our weaknesses, with our sins.”

“Let’s think about a personal relationship, during this week: what has the patience of Jesus meant in my life? Just this. And then only one thing will come from our hearts: ‘Thank you, Lord! Thank you for your patience.’ ”