Some things just need to be shared. Many people struggle to believe in God, in His Mercy, and in the Eucharistic Presence.  Sometimes a sign from above is what is needed to rekindle our hope in Our Lord, our assurance in His constant presence in our lives, and a belief in the truth of the Real Presence of Jesus Christ in the Eucharist.

A friend of mine was given this very thing when, as he knelt during Adoration of the Blessed Sacrament, he saw something amazing.

I leave out my friend's name and other details regarding the location only because there is a process of investigation before the Church can speak about the image as a "Eucharistic Miracle", and we would like to respectfully follow that process. For more about Eucharistic Miracles find our selection of books here.

Here is what my friend wrote to me about his experience: 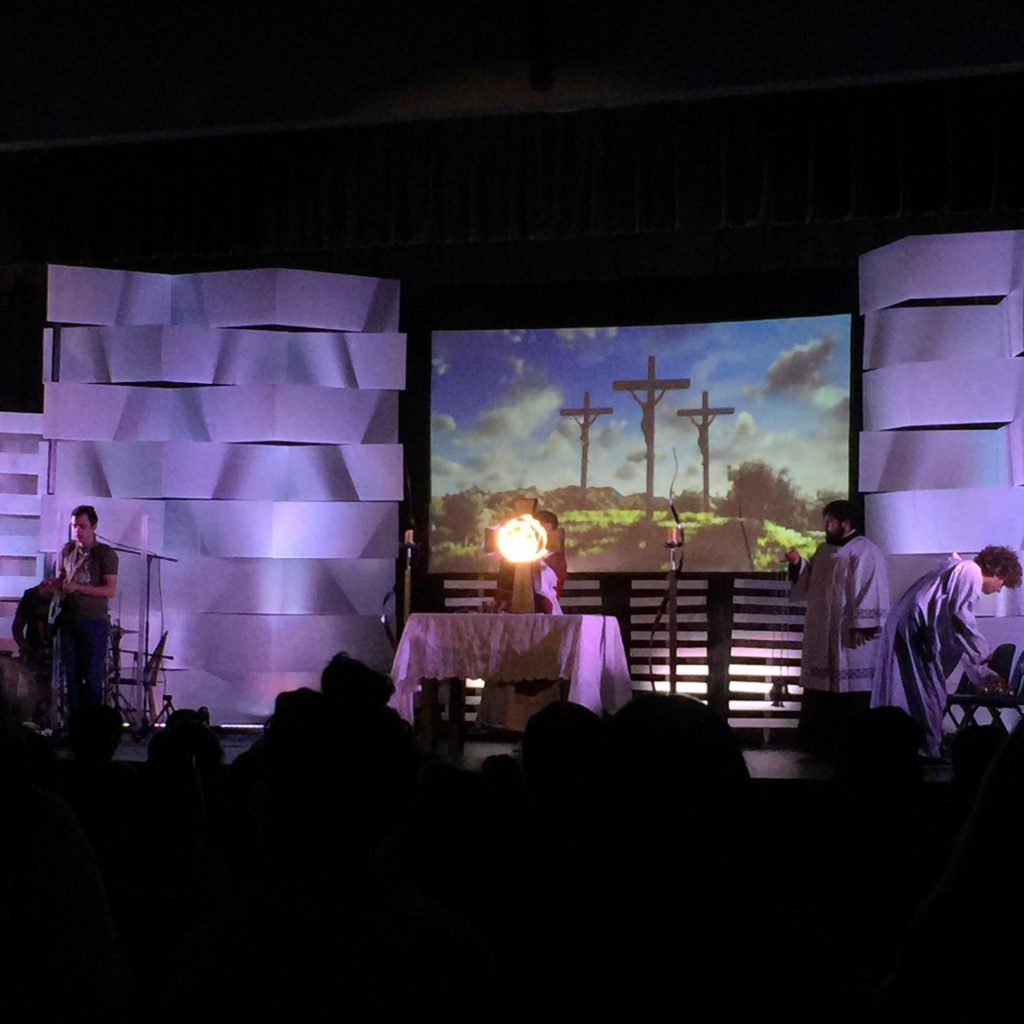 What I will provide are the facts (no embellishments) behind what I believe is a Eucharistic Miracle. There is no other explanation.

The Eucharistic miracle took place during a Benediction with the Blessed Sacrament on June 25, 2016 at 6:34 PM in a high school auditorium where an altar was set up for a youth retreat where I was a chaperone.

I was there with my wife, my youngest son who was on the high school retreat, and other chaperones who were at the youth camp. Our group of teens had been working the entire week in one of the poor communities in the city helping to clean, paint and convert an old abandoned elementary school into a community center for the youth of the community.

On our last day before we were to return to our parish, the staff scheduled adoration with Benediction of the Blessed Sacrament for all of the youth and chaperones involved (over 300 people).  As the adoration period was ending, and the presiding priest was about to bless the congregation with the Eucharist, I saw a light - a fiery glow actually - begin to emanate from the primarily oak monstrance set upon the altar. Unlike most monstrances, this one was made primarily of wood with very little metal ornamentation.

Of course I believed that the entire congregation saw exactly what I was seeing . . . this fire emanating from the Our Lord in the Eucharist.

As the flame began to grow and dance I pulled my iPhone from my back right pocket and took images over a period of approximately 9 -10 seconds.  My wife glared angrily at my action and rightfully so, but I was so amazed at what I thought was some type of special effect.  I was 'moved' to take the pictures.

The pictures capture the moments leading up to the blessing by Father while he is praying the Rite of Eucharistic Exposition and Benediction.  In the last picture, as Father was about to elevate the monstrance, the light (or fire) became bright light the sun, brightened the stage and then as quickly as it appeared - it disappeared. 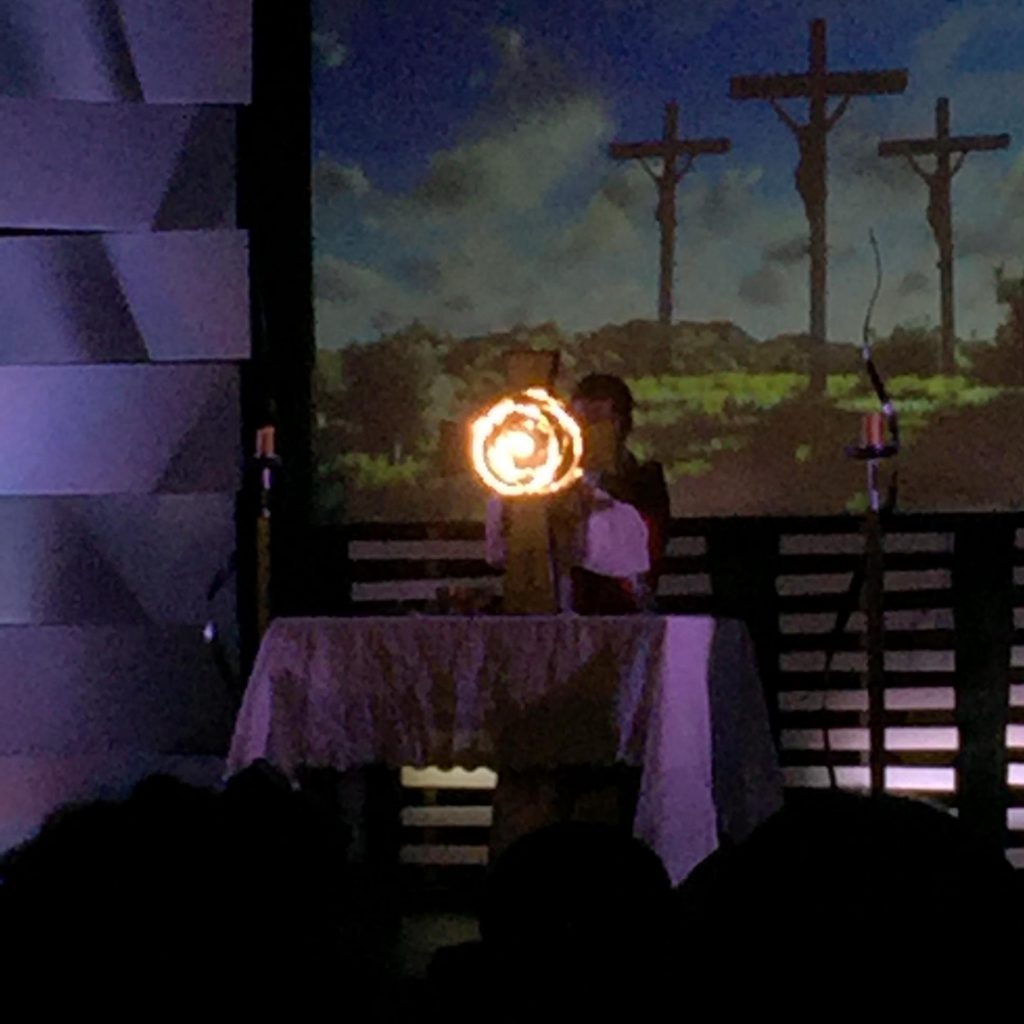 I then placed my phone back in my pocket, Father completed the Benediction, processed out of the auditorium to place the Blessed Sacrament back in the chapel tabernacle.

As my wife and I were leaving the auditorium she asked me what I was doing texting during the Benediction ceremony.  I explained that I was not texting and that I wanted to capture images of the flame emanating from the monstrance.

My wife looked at me puzzled and asked me, "what flame"?  I pulled my phone from my pocket and for the first time saw what I captured in the four images.  My wife said she never saw any light or flame - only the monstrance on the dimly lit altar.  We were both speechless.  During the Benediction my wife had been on her knees to my right . . .  How could she not have seen this?

I immediately asked my friends who had been immediately to my left on their knees during adoration - Did they see the flame?  They looked at me puzzled and said,  "No, what flame or light?"  How could they not have seen this?

I went to find Father and asked him if he saw any reflections or light coming from the monstrance.  The answer was no.  I showed Father the images and he was instantly and emotionally moved by what he saw.  Father took my pictures and went back into the auditorium where the camp staff was shutting down the sound board for the band that had played music during adoration.  Father asked if they had special lighting directed at the monstrance or altar - they said no. We all looked for spot lights or some explanation.  We also asked these individuals if they saw a light or reflection - anything like what we then showed them - they again answered no.

As the night went, we showed other chaperones and teens the images to try and see if anyone else saw a light, reflection or anything close - we learned no one (out of the 300+) other than me saw this fire and was then 'moved' to photograph this Eucharistic miracle.

I have shown these pictures to only a couple of other priests I know well to get their perspective and advice.  I was told by both to continue to pray on what God is trying to tell me.  I was also advised to not use my name as some will 'chase' the supernatural (as it was stated).  To have seen God in the fire of the Holy Spirit emanating from the Blessed Eucharist has been life changing. 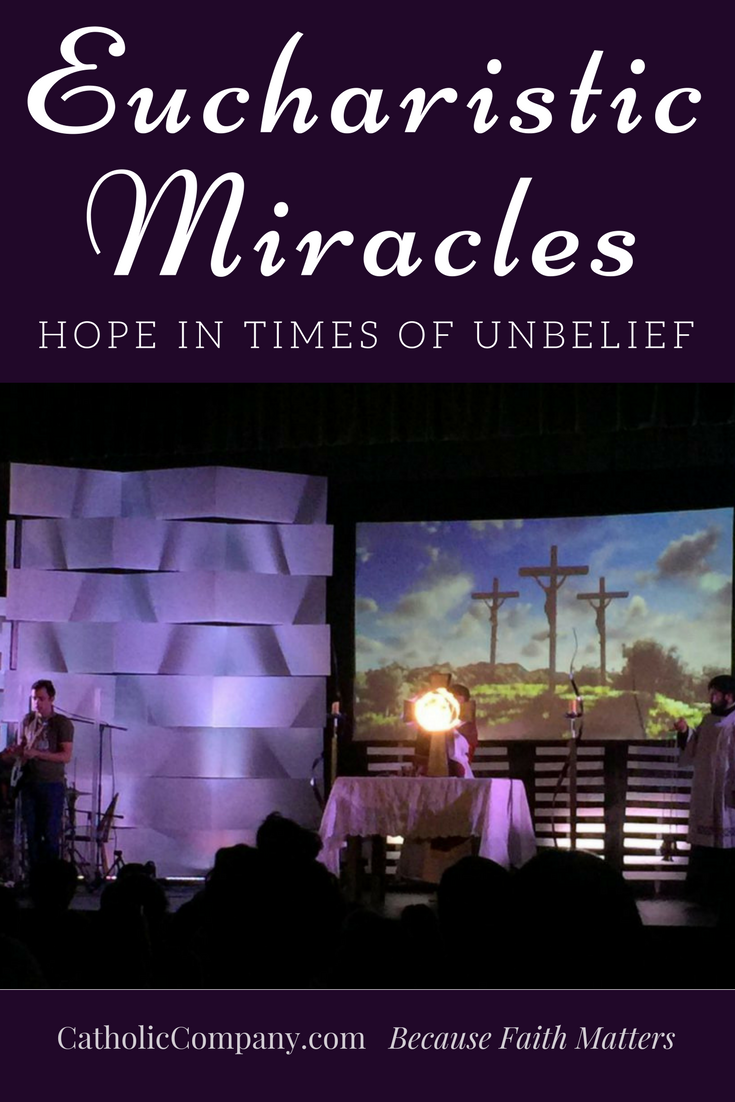