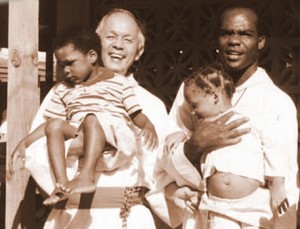 Today we often here that the Church is in dire need. Dire need of everything from mass attending laity to vocations to the priesthood and religious life. Many religious orders, especially women's religious orders, have seen their numbers drop substantially over the past decades. Convents and schools left and right have closed as consolidation efforts are continuing across the Roman Catholic Church. This trend is very disturbing and fervent prayers have been said and are still being said for a turning of the tide in religious vocations.

Blessed Pope John Paul II spoke during his papacy of a New Evangelization. This New Evangelization includes fostering a Christian life in which the call to a religious or priestly vocation can be heard. According to Ad Gentes which is the Decree on the Missionary Activity of the Church, “From this renewed spirit, prayer and works of penance will be spontaneously offered to God that He may fructify the missionaries' work with His grace; and then there will be missionary vocations, and the material subsidies which the missions need will be forthcoming.(Ad Gentes 36)”

I myself have been on two mission trips with the MOP. Both times I went to Kingston, Jamaica at which they have 5 shelters in the city and one in the nearby mountains. In Jamaica alone they have over 200 brothers to care for the hundreds of mentally and/or physically handicap which they house and love on a day to day basis. Serving the poor with the brothers is an experience unlike any other that I have ever had. The love they have for the poor and vice versa is overwhelming and stunning. There communities are ones of love and joy in which they live their motto “Joyful Service with Christ on the Cross.” They also lead inspiring spiritual lives as they participate in the Liturgy of the Hours , daily rosary, daily mass, and joyful singing.

Every day I am reminded of the presence of the Holy Spirit with these brothers and with their work. I remember Brother John Fraiser recounting a story of feeding 80 Jamaican children with only enough food for 60. He couldn't explain how they had enough food to feed all of the children and not only that but to have left-over food supplies as well. The brothers were in awe and we all knew that it was the Holy Spirit and the work of God which had provided in that moment.

The MOP are New Evangelization in a way that no one could have imagined. They also embody the Year of the Faith with their commitment to the Holy Scripture's, Christ, and living out the faith daily. They bring us hope that men are still being called and answering the call of God. I highly encourage anyone and everyone to meet these wonderful brothers and serve the poor side by side with them. I ask that you continue to pray for vocations to the religious life and priesthood as well as specifically for the MOP .