St. Charbel Makhlouf (1828 – 1898) was a Maronite monk and priest from Lebanon, known during his life and after his death as a saint, mystic, and a great miracle-worker. He is also known for his holy wisdom, gleaned from a life of penance, deep prayer, and silence. One of the themes he articulated was the foundational importance of the human family in God's created order and salvation history, and Satan's attacks against it.

St. Charbel's words seem prophetic in light of the message and warning of Our Lady of Fatima. As Sr. Lucia of Fatima once wrote to Cardinal Caffarra, when he sought her prayers for the success of Pope St. John Paul II's newly-created Pontifical Institute for Studies on Marriage and the Family,

Father, a time will come when the decisive battle between the kingdom of Christ and Satan will be over marriage and the family. And those who will work for the good of the family will experience persecution and tribulation. But do not be afraid, because Our Lady has already crushed his head.”

Read the full context from which the above quote was pulled:

WORDS OF ST. CHARBEL ON THE HUMAN FAMILY

The human family on earth is the image of the Holy Family in heaven. The family passes on the plan of God from one generation to another. It transmits the love and word of God through the generations. The collapse of the family means the collapse of God’s plan in humanity. It means the breakup of the message of salvation and sanctity to humanity. Every family is a holy family because it is the image of God the Trinity. The corruption of the family means a corruption of the image of God. The family carries the torch of light and passes it from one generation to another so the world may remain lit by the light of the Lord.

The family is the place where a man communicates with God and with his brothers in humanity. Without the family, this communication is broken and nothing can ever make up for it, and if man attempts to reconnect the broken contact using his human means, it will become fragile, weak and twisted, and humanity will become ill and warped - moving towards a slow death.

Guard your families and keep them from the schemes of the evil one through the presence of God in them. Protect and keep them through prayer and dialog, through mutual understanding and forgiveness, through honesty and faithfulness, and most importantly, through listening. Listen to one another with your ears, eyes, hearts, mouths and the palms of your hands, and keep the roaring of the noise of the world away from your homes because it is like raging storms and violent waves; once it enters the home, it will sweep away everything and disperse everyone. Preserve the warmth of the family, because the warmth of the whole world cannot make up for it.

For more wisdom from this profound and powerful saint:

Source: Words of Saint Charbel
St. Charbel, please pray for the integrity, strength, and faith of our families, that we may steadfastly resist the devil's attacks against us, with the weapons of the light and truth of Jesus Christ.  Amen. 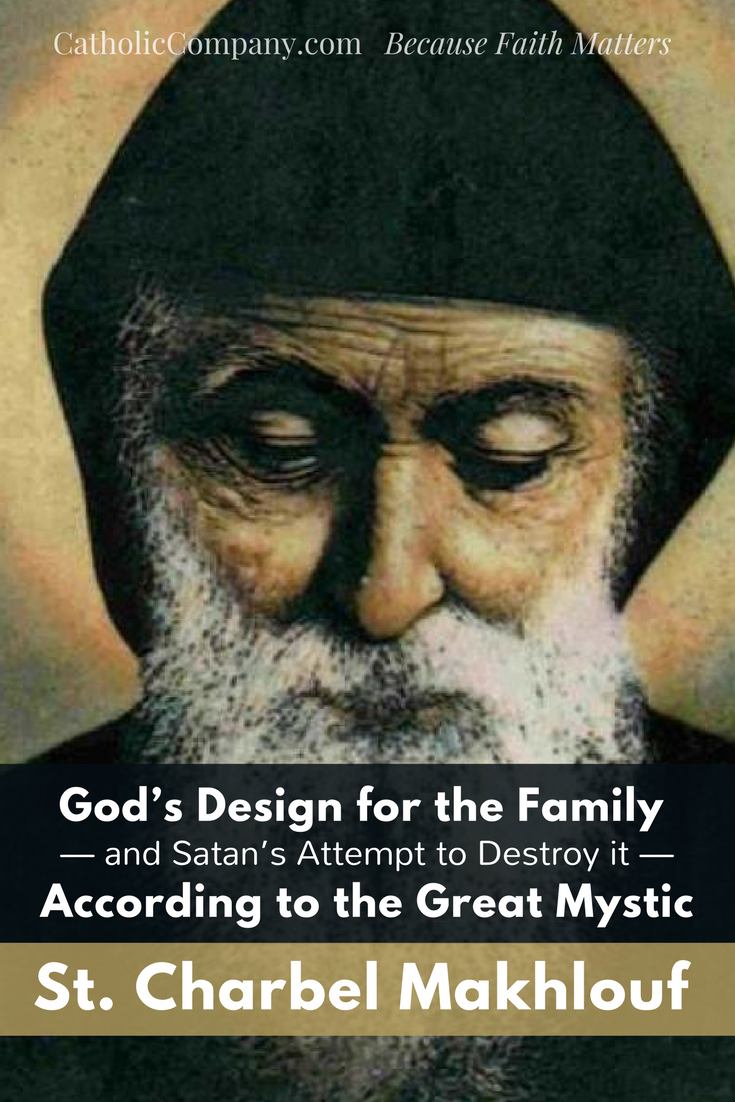