November 21st is the feast of the Presentation of the Blessed Virgin Mary.

According to tradition, the Blessed Virgin Mary was consecrated to God as a young child and was given by her holy parents, St. Anne and St. Joachim, to live in the Jewish temple in Jerusalem. This special feast day honoring this event appeared in the East much earlier than it did in the West.  Then, in the late Middle Ages it was promoted as a feast day for the universal Church.

Much like the Old Testament story of Hannah and her son Samuel, tradition holds that Mary, as a little girl of three years old, was given to God to be educated and raised in the temple as a result of a promise made between God and St. Anne while St. Anne suffered from a long period of infertility. 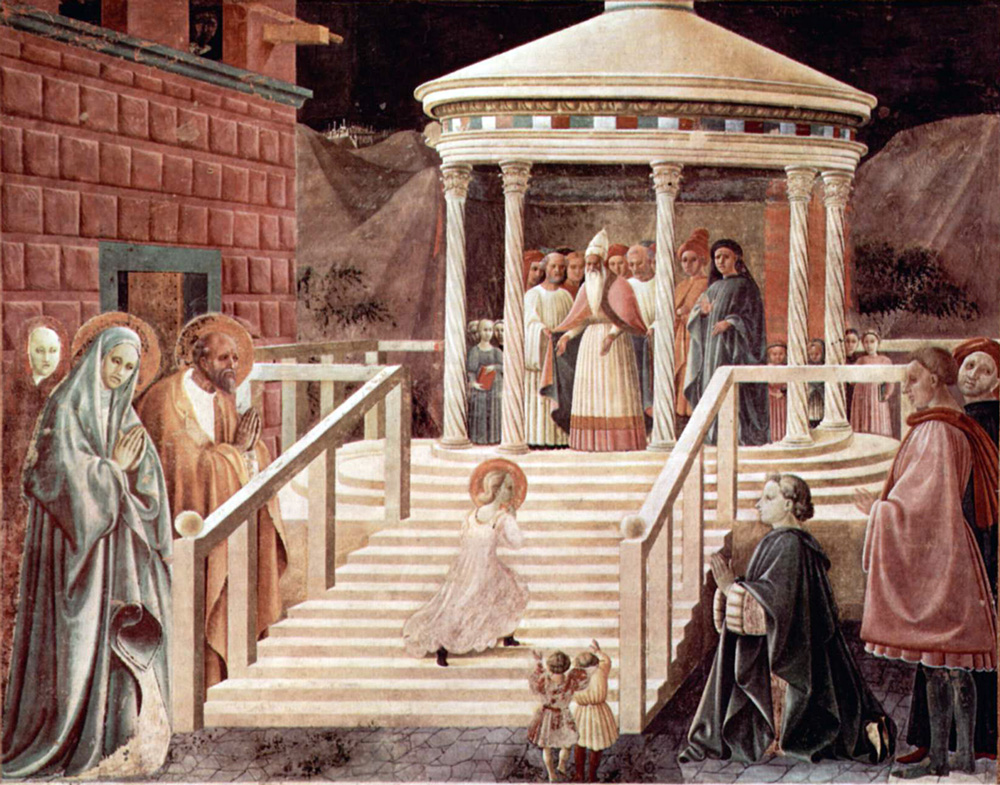 Many modern sources claim that the Presentation of Mary has no historical basis because the event is only found in apocryphal (and historically unreliable) literature. Belief in this historical event is more along the lines of popular piety because it finds no place in Sacred Scripture or official Church teaching.

The importance of the feast day, rather, is its theological significance due to the connection with the dogma of the Immaculate Conception and the fact that Mary was indeed consecrated to God as a Holy Virgin, and offered herself to Him completely.  However, the claim concludes that the Presentation doesn't correspond to an actual historical event where Mary, as a small child, was ceremoniously dedicated at the temple in Jerusalem. 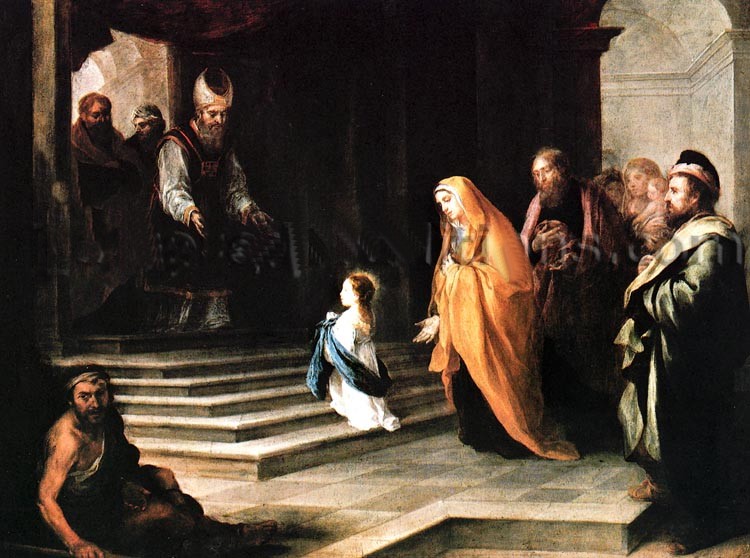 However, there is a Catholic mystic—a prolific visionary—who left us an account of visions she received of the Presentation of Mary, which she claimed was a real occurrence that took place in Israel's history.

This mystic and visionary wrote extensively of her visions of past historical events, including the life of Christ as well as the life of the Blessed Virgin Mary and her family, along with many other biblical figures. This mystic is Blessed Anne Catherine Emmerich, a nun, stigmatist, visionary, and ecstatic who was beatified by Pope John Paul II.

Blessed Anne Catherine Emmerich (1774 – 1824) has gained popularity in recent years because it was her visions on which the famous Passion of the Christ movie were based.  The books that describe her many visions are The Dolorous Passion of Our Lord Jesus Christ, The Life of Jesus and Biblical Revelations, The Life and Revelations of Anne Catherine Emmerich, and The Life of the Blessed Virgin Mary which you can find here.

It is in this latter book that the account of the Presentation of Mary is described in elaborate detail, and a portion of it is copied below.  You can read the whole account, and much more about Mary's life, in the last book just mentioned.

Excerpts from The Life of the Blessed Virgin Mary

“Joachim went first to the Temple with Zechariah and the other men. Afterwards Mary was taken there by her mother Anna in a festal procession. First came Anna and her elder daughter Mary Heli, with the latter’s little daughter Mary Cleophas; then the holy child Mary followed in her sky-blue dress and robe, with wreaths round her arms and neck; in her hand she held a candle or torch entwined with flowers. Decorated candles like this were also carried by three maidens who walked on each side of her, wearing white dresses embroidered with gold. They, too, wore pale-blue robes; they were wreathed round with garlands of flowers, and wore little wreaths round their necks and arms as well. Next came the other maidens and little girls, all in festal dress but each different. They all wore little robes. The other women came at the end of the procession.”

“When Joachim’s sacrifice started to burn, Anna went, with the child Mary in her ceremonial dress and with her companions, into the outer court of the women, which is the place in the Temple set apart for women.”

“Zechariah and Joachim came out of the court of sacrifice and went up to this altar with a priest, in front of whom stood another priest and two Levites with scrolls and writing materials. Anna led the child Mary up to them; the maidens who had accompanied Mary stood a little behind. Mary knelt on the steps, and Joachim and Anna laid their hands on her head. The priest cut off a few of her hairs and burnt them in a brazier. Her parents also said a few words, offering up their child; these were written down by two Levites. Meanwhile the maidens sang the 44th Psalm (Eructavit cor meum verbum bonum) and the priests the 49th Psalm ( Deus, deorum Dominus, locutus est ) accompanied by the boys with their instruments.

I then saw Mary being led by the hand by two priests up many steps to a raised place in the wall dividing the outer court of the Holy Place from the other court. They placed the child in a sort of niche in the middle of this wall, so that she could see into the Temple, where there were many men standing in ranks; they seemed to me to be also dedicated to the Temple. Two priests stood beside her, and still others on the steps below, singing and reading aloud from their scrolls. On the other side of the dividing wall there was an old high priest standing at an altar of incense, so high up that one could see half of his figure. I saw him offering incense and the smoke from it enveloping the child Mary. . . “ 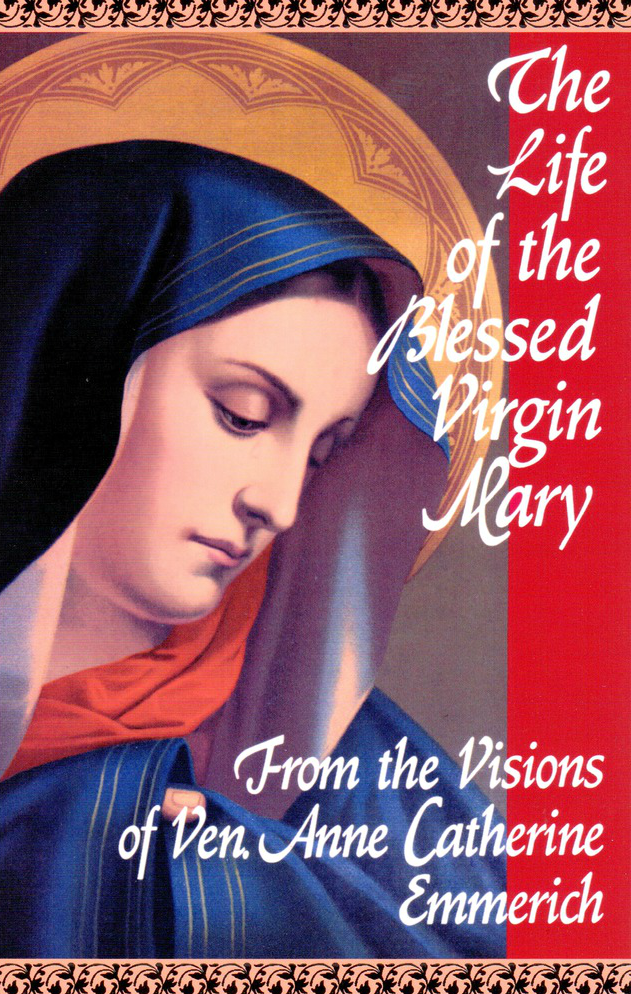 Although these visionary accounts are not approved by the Church, nor as private revelations are they a part of Church teaching, however, it is interesting is that they have been used in archaeological excavations to discover many of the places Blessed Anne Catherine Emmerich described.

One of the most significant of these discoveries is the house where the Blessed Virgin Mary lived in Ephesus prior to her Assumption, found exactly where Emmerich said it was.  Although the finding of the Ephesus house as the true House of the Virgin Mary has also not been declared by the Church, it has been deemed a "Holy Place" and a number of popes have visited the site, including Pope Benedict XVI.

So, we do have good reason (though not dogma) to believe that the Presentation of Mary, the feast that we celebrate on November 21st, is an event that really happened in history.  On this day we remember when the Blessed Virgin Mary left the care of her parents in order to fulfill her special role in the redemption of the human race as the Ark of the Covenant, the bearer of the Word of God, the Mother of Jesus Christ.

According to Blessed Anne Catherine Emmerich, it was eleven years after the Presentation of Mary that the Annunciation and Incarnation took place. We see greater unfolding and fulfillment when the Blessed Virgin Mary returns to the temple with the Child Jesus at his presentation, the event where Christ was offered to God in the temple as prelude to his sacrificial death.

Holy Mary, Mother of God, pray for us! 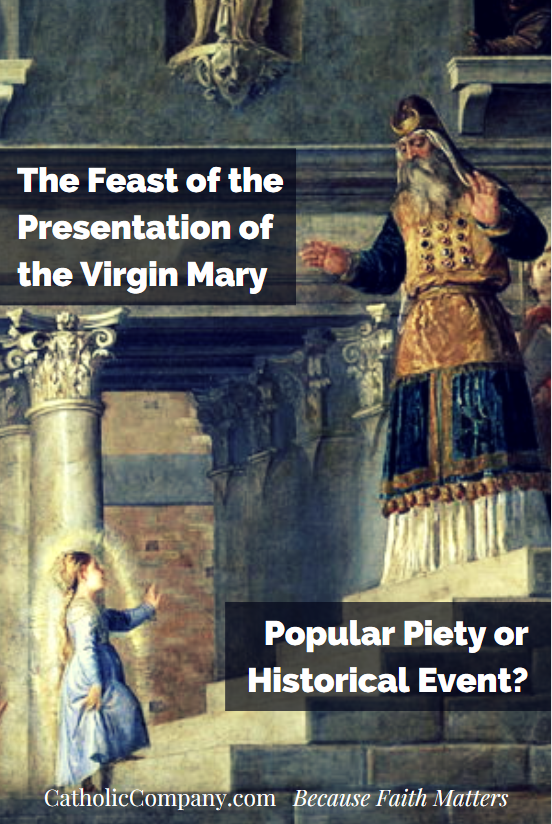 This article has been updated and was originally published in November 2012. © The Catholic Company. All rights reserved.