Our parish in Charlotte, North Carolina recently had the privilege of a visit from a priest of Opus Sanctorum Angelorum who offered us the opportunity to consecrate ourselves to our Guardian Angels.  He also offered a unique opportunity for parents to consecrate their children (under the age of 14) to their guardian angels in a liturgy which he performed. It was a beautiful expression of devotion to the guardian angels, and since then I have thought a lot about my own guardian angel as well as the angels of those I love.

Prior to my conversion to Catholicism and becoming a parent, I had not really thought much about angels except when I saw them portrayed in art or in knick-knacks at a Hallmark store.  It's not that I didn't believe in them, but I thought of them as I think of other things that are mysterious... that they are beyond my reach in terms of knowing any more about them.

Even as a Catholic, however, I didn't truly understand the role of angels or the Church's teaching regarding angels until fairly recently.

One thing is for certain . . . as a mother, I have a true sense that angels must exist.  I imagine most mothers feel this way.  There are many close calls and numerous times when things seem to supernaturally align in ways that protect our children.

Angel of God, my guardian dear,

to whom God's love commits me here,

ever this day, be at my side,

to light and guard, to rule and guide.

This favorite prayer of mine I pray multiple times a day for all of my children, sometimes in particular for one or another who may be in harms way.  My oldest is a Navy pilot and flies the Super Hornet jet.  He has been deployed on a carrier for the past seven months, and  every day I pray that his guardian angel will protect him as he flies.

Sometimes I wake in the middle of the night.  I find it difficult to go back to sleep.  Often I wonder if my angel has awoken me, and so I pray for each of my children and ask their angels special protection in anything they might need.  I ask the angels of all those I love to help them in whatever they need. 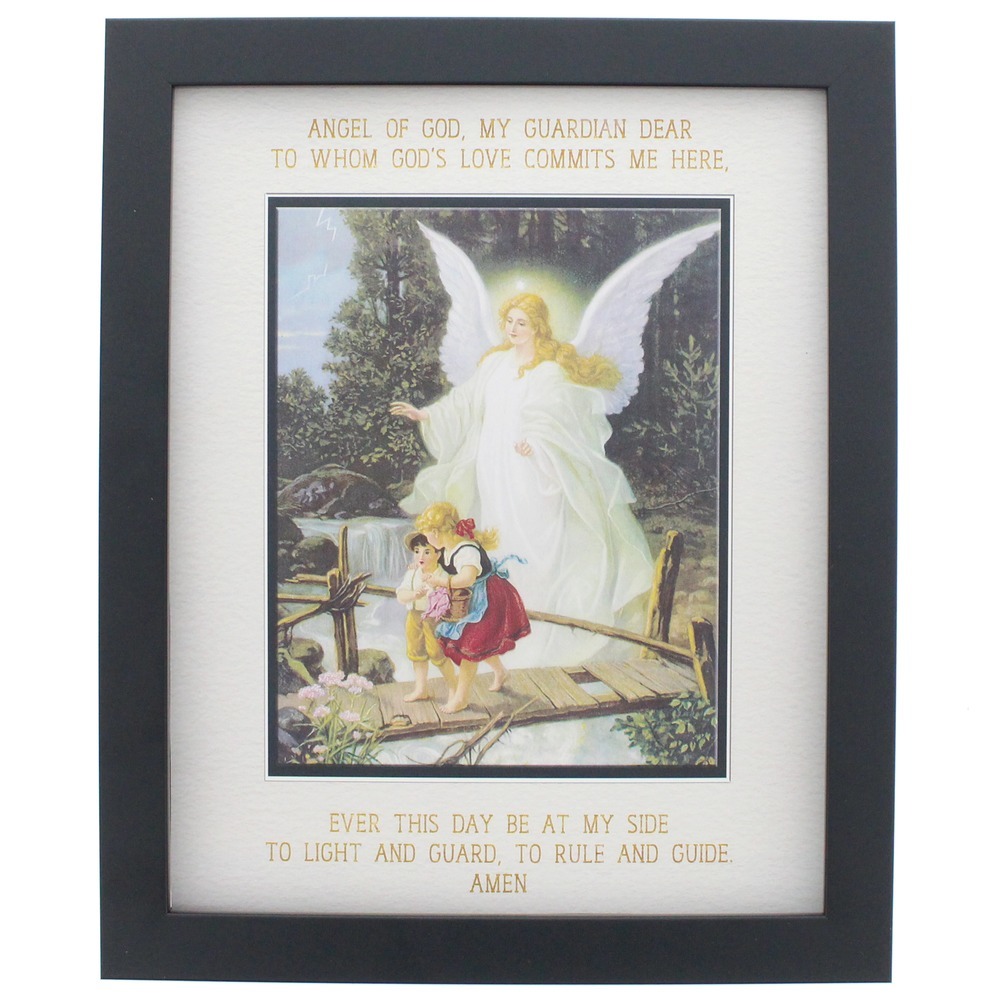 Something happened recently that made me recall the important work of our guardian angels. My niece had just gotten her driving permit, and she was driving with my sister in a car she had not driven before.  As they approached a stoplight (which was red) not far from their house, my niece went to press on the brake but instead hit the gas hard.  They flew through the red light and barely dodged two cars that were driving through the intersection at that moment.  By the time they reached the other side of the intersection and could pull over onto the side of the road, my sister said she felt her heart in her chest and was dumbfounded as to how they had not been hit by either of the cars.  Someone driving in a car behind them had seen the event and pulled over to see if they were okay.  The driver of that car said it was a miracle that they had missed those two vehicles and that it was just a matter of seconds that had somehow made the difference.

When I spoke to my sister about it the next day she agreed there must have been Heavenly assistance.

Assistance is the key word when it comes to our angels.  We know that God exists and watches over us and cares about each and every hair on our heads. He gives each of us an angel to assist in bringing us ultimately to our Heavenly home. According to the Catechism of the Catholic Church:

"From its beginning until death, human life is surrounded by their watchful care and intercession. Beside each believer stands an angel as protector and shepherd leading him to life. Already here on earth the Christian life shares by faith in the blessed company of angels and men united in God [CCC 336]."

Opus Sanctorum Angelorum, the Work of the Holy Angels, is an international movement within the Catholic Church, and faithful to the Magisterium. It is ordered to promoting devotion to the holy angels and a covenant bond with them through a consecration approved by the Church, so that the holy angels may lead us more effectively to God. TheWork of the Holy Angels is under the overall direction of the Order of Canons Regular of the Holy Cross, under which has also been erected the Confraternity of the Holy Guardian Angels. The Sisters of the Holy Cross is aggregated to the Order and, though autonomous, forms with it one spiritual family.

According to Opus Sanctorum Angelorum, there are four ways which we endeavor to live a sacred bond with the angels: in adoration, in contemplation, in expiation, and in the apostolate. These are at the same time the four fundamental bearings of the spiritual life in the Work of the Holy Angels. 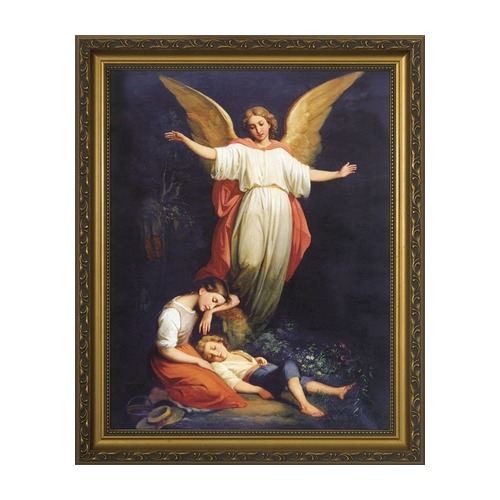 1) Assistance in the Adoration of God

We ask for the Holy Angels assistance in adoring Our Lord. Pope John Paul II instructs, "'The angels in heaven always see the face of my Father who is in Heaven' (Mt 18:10). 'To see the face of the Father always' in this way is the highest manifestation of the adoration of God. One can say that this constitutes the 'heavenly liturgy' carried out in the name of all the universe, with which the earthly liturgy of the Church is incessantly joined, especially in its culminating moments. Let it suffice here to record the act with which the Church, every day and every hour, in all the world, before the beginning of the Eucharist Prayer in the center of the Mass, makes appeal 'to the Angels and Archangels' to sing the glory of the thrice-holy God, uniting herself thus to those first adorers of God, in the worship and the loving knowledge of the unspeakable mystery of his holiness" (General Audience, August 6, 1986).

2) Assistance in the Contemplation of the Word of God

"The holy angels are instruments (ministers) and witnesses to the words and saving works of God in the history of salvation. They were, for example, present at the birth of Christ, at his crucifixion, resurrection, and ascension. They communicate to us in the measure of our receptivity the light of these mysteries, which they perceive in a more perfect way than we do." (Opus Sanctorum Angelorum website).

3) Assistance in the Imitation of the Crucified Savior

We can be assured that our angels are with us when we suffer.  Interestingly, it is in human suffering that it could be said that we have an advantage in a way over the angels. "While the angels, by reason of their spiritual nature and heavenly beatitude, are far ahead of us in the first two fundamental bearings of adoration and contemplation, we have, in a certain way, an advantage over them in the imitation of the Crucified Lord. For the Son of God assumed our nature, and only man can participate in his redemptive suffering. Accordingly, St. Therese of the Child Jesus says that if the angels could envy us in some way, it would be our capacity to suffer for and with Jesus." (Opus Sanctorum Angelorum website).

It is in our suffering and offering up of the sorrows and tribulations of this life that we can grow closer to Christ, and the angels can assist us in offering our suffering in this way. It is in this third way that we can come to appreciate and to comprehend that "love which bears suffering is the greatest and most noble force and that this love alone can gather in the harvest for God and gain the victory for him."

4) Assistance in the Mission and Office in the Church

In a special way, we can rely on help from our angels in fulfilling our mission in the Church.  Each of us has a role to play in this mission.  "Each member of the Body of Christ has its own proper mission or task to fulfill for the welfare of the Church" (Opus Sanctorum Angelorum website). Our angel will "let his light shine and offer his help" in bringing about the task we are asked to do.  Asking our angels for this particular help is important.  It is not that our angels do not lend their assistance without our request, "but it is still important that we ourselves should ask for this angelic help, last but not least, so as to be receptive to it."

As I mentioned earlier, I am indebted to my children's guardian angels and to my own.  It is a special gift that God gives us to have a friend in an angel in this life, to assist us as we walk along the journey that each of us must walk under the unique circumstances of our life.

How wonderful to know that we have a most faithful and loving guardian to assist us on our way. How comforting for me to contemplate that my children also have their own special friend and guardian whose purpose it is to help them get to heaven.

Do you know your angel?  Ask him to help you to know and to trust him on your journey and pray for your children to also be receptive to theirs. 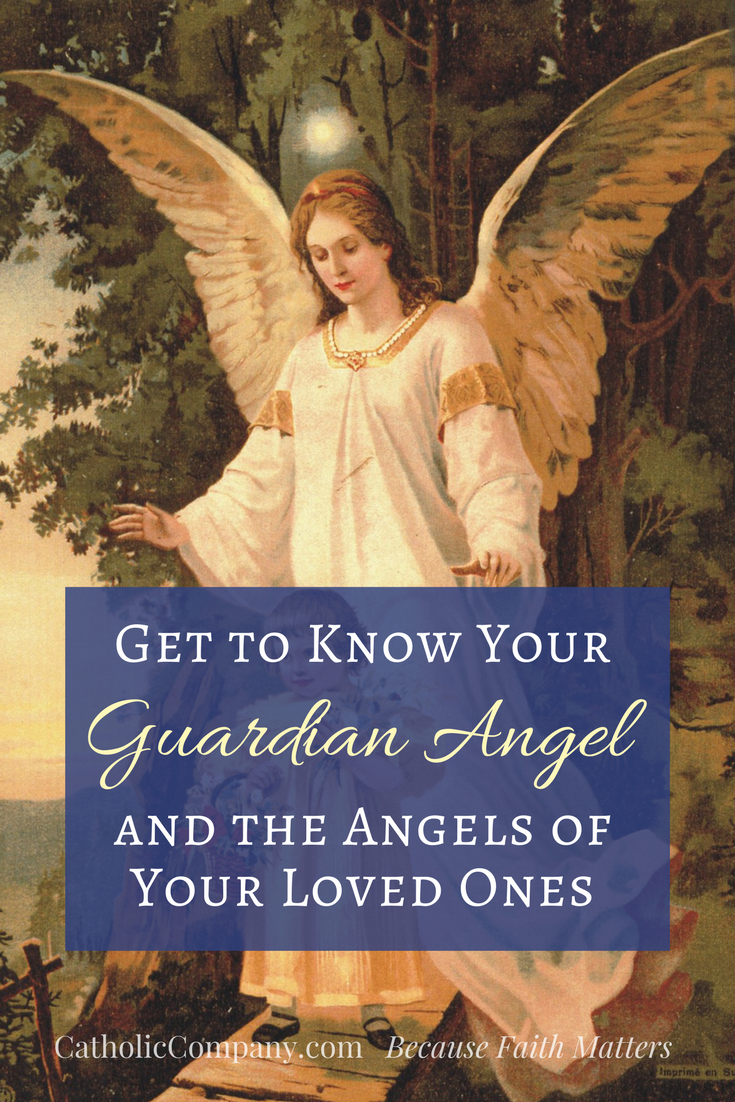 All rights reserved. © The Catholic Company