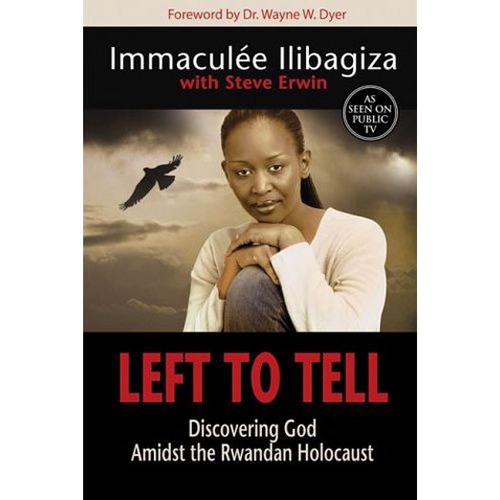 Yesterday Immaculee Ilibagiza became a U.S. citizen.  Immaculee is a Rwandan national who fled to the United States for asylum following the 1994 civil war and horrific massacre in her home country. She is famous for telling her story of survival through books, talks, and interviews.

Immaculee, a Catholic, resorted to her Catholic prayers and the messages of Our Lady of Kibeho in her hour of darkness and fear.

While her family and a million other Rwandans were slaughtered with machetes in the streets by their fellow countrymen in one of the most horrific genocides in human history, she hid with seven other women in a tiny three by four foot bathroom for a total of 91 days until the civil war's end.

The eight women didn't speak, slept upright, and ate what little food that could be shoved under the door while evil and terror ravaged their country. Central to her survival was the messages from Our Lady of Kibeho, a Church-approved Marian apparition site where Our Lady warned of the massacre ten years before it occurred.

Her book recounts the horrific events, as well as how she managed to stay alive by being huddled in a neighbor's tiny bathroom where she literally prayed without ceasing, specifically the Our Lady of Sorrows chaplet (which was specifically recommended by Our Lady of Kibeho) and the Divine Mercy Chaplet.

Although she was wildly angry and ready for revenge because of what was happening to her, Our Lady transformed her deep anger into forgiveness through Immaculee's prayers.  "I felt God was showing me there are two parts of the world: a part that was love, and a side that was hate," she said.  She began to think of those doing the killing "as people who were lost, who were blind.  And if I did not let go of the anger, I would not be here today;  I would have tried to kill people, and they would have killed me."

Immaculee has reconciled with and forgiven the man who killed some of her family members—a family friend whom her parents had at one time taken into their home when he was younger.

Immaculee continues to take groups to visit Rwanda annually. Of her new country, the United States of America, she says, "I love the American dream. I feel this is the place I was supposed to be in.  It's beautiful. I love it."

Below is the fascinating interview Immaculate did with Fr. Pacwa on EWTN: