Catholic Art is some of the most beautiful art made by human hands and has a rich history dating back thousands of years.  Many artists, such as Da Vinci, have depicted popular moments during the ministry of Jesus Christ such as the Crucifixion, the Ascension, and the Resurrection through paintings, sculpture, and more.  One of the oldest and most popular scenes to depict is The Last Supper.  Many artists have sought to capture this brief moment in very different ways and I am going to cover my top 3 depictions of the Last Supper throughout history. 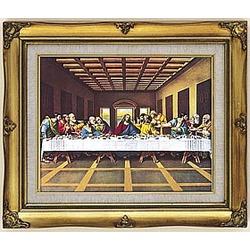 This is the most famous painting of the Last Supper and is supposed to depict the moment after Jesus reveals that he will be betrayed.  The apostles all react in different ways to the news varying from shock to anger.  Judas' betrayal is foreshadowed by Da Vinci as shown by Judas' withdrawn depiction and clutching of a money bag which could represent the payment he receives to betray Jesus.  This painting is from the 15th century and has been the target of great speculation in books such as The Da Vinci Code by Dan Brown. 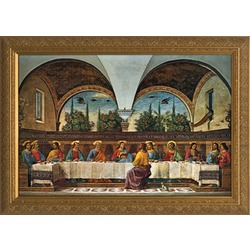 This Last Supper depiction is a fresco painted around a decade before Da Vinci’s which also portrays the revealing of the betrayer.  This portrayal has Judas the Betrayer as the apostle on the side of the table opposite Jesus Christ which clearly foreshadows his evil actions.  One should note that the reactions of the apostles in this portrayal are far more toned down than the reactions of the apostles in the Da Vinci portrayal.  Many speculate that Da Vinci was familiar with this painting and sought to make the reactions more dramatic in his own painting. 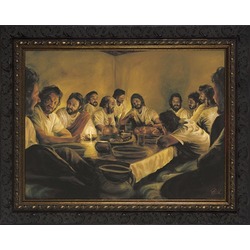 This painting of the Last Supper is a far more realistic rendition than Da Vinci's portrayal.  In this rendition the apostles are seated around the entire table with a meager meal before them.  They seem in deep conversation and this scene seems to take place before the revelation that one of them will betray him.  Furthermore, this painting attempts to draw one into the painting and make you feel like you are in fact seated at the table with the other apostles.  This is a very unique portrayal of the Last Supper which is very close to how the Last Supper looked all those years ago as they are wearing simply clothes with meager food and in dim lighting.