As a new Catholic, I'm enjoying my 'nesting phase'—filling my home with reminders of my Christian faith.  As a Protestant, I didn't have much of anything to look at that directed my eyes and thoughts heavenward.  I didn't think it mattered.

Now, all of that is changing.  I've fully embraced the Catholic belief that it's a good thing to use all of your senses in an everyday life of Faith,  just as all of the senses are engaged in Catholic worship.  I wanted to fill my home with elements of what I experienced at Mass.  I bought a crucifix and a Mary statue.  I found some sacred music that I liked.  I left illustrated prayer books out on an end table, and placed a Jesus icon next to a candle on my bookshelf.  I put a rosary in every room as a reminder to pray.  I didn't pack up my nativity scene when Christmas ended.  Simple things.  Bit by bit, piece by piece, my home is starting to look like a Christian lives there.  I love that.

This nesting phase gradually moved outdoors.  I'm certainly not an avid gardener, but I do like my outdoor spaces to be pleasant and inviting . . . a nice place outside to rest, and to read or pray from time to time.  There is just something about a soft breeze or a starry night that allows the senses to move the soul heavenward.

I thought I would encourage this effect even more by creating my own Marian garden, that is, surrounding a beautiful outdoor Mary statue with lots of beautiful garden plants.  (I certainly couldn't buy an outdoor Mary statue and leave her without any adornment!).  I got some inspiration from the gorgeous Catholic garden at my parish—overgrown flowerbeds sprinkled with a Jesus statue, a Mary statue, and a St. Francis statue.  Then I sat down to do some research on Mary gardens. 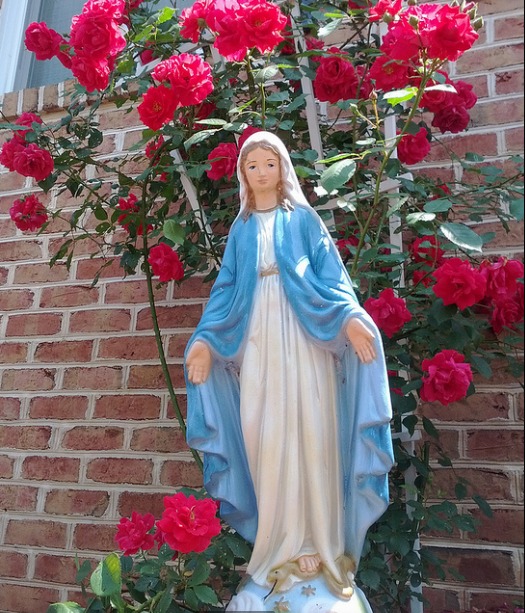 Little did I know that in addition to having a Mary garden statue, I could also choose plants for my Marian garden that had rich Catholic significance.  I discovered that during medieval times, thousands of plants and flowers were originally named after the Christian faith.  Who knew there was such a thing as Catholic plants?  Today, most of these names have been lost and replaced with other common names.

For example, bougainvilleas were once called 'Trinitaria' because their flowers emerge as a single three-leaf cluster.  Many plants were specifically Marian.  Begonias were known as 'Heart of Mary' due to their heart-shaped leaves, and baby's breath was once called 'Mary's Veil' because of its intricate, delicate white flowers.  A few names have remained in common usage, however, such as marigold ('Mary's Gold') and lady slippers ('Our Lady's Slippers').  I could choose from any number of these Marian garden plants to adorn my Mary statue.  With all of the variety, there was no end to the thought and creativity I could put into making my Catholic garden a special place for my home.

I was excited to also discover that my Mary Garden had already started without my realizing it.  I had a huge rosemary bush growing against the fence, and my mother had recently given me a hosta, once called an  'Assumption Lily'.  I was amazed when I first caught on to the reason for the name.  The plant stayed low and hugged the ground with pretty, wide green leaves.  I thought it would stay that way.  Then a tall, thin stalk emerged, eventually blooming into a spectacularly beautiful purple flower.  Ah . . . Assumption Lily . . got it!  That's Mary all the way. Funny how the medievals knew that many simple things can be used to teach the Faith, even plants (like St. Patrick and the shamrock), something long forgotten in our day. I was pleased to already have such a meaningful plant in my Marian garden.

I also already had tons of begonias flowering big and full.  It looked like my Marian garden was all set.  I just needed a few Catholic garden items to sprinkle around, and, of course, a beautiful Mary garden statue to tie it all together.  And maybe an outdoor St. Francis statue too, since I'm also a big wildlife lover.  I added a birdfeeder and a garden cross as well.  Now my Marian garden is looking beautiful (and very Catholic!), waiting to encourage me to spontaneous prayer.