May 30 is the feast day of St. Joan of Arc (1412 - 1431), patroness of soldiers, captives, prisoners, martyrs, rape victims, people ridiculed for their piety, and France—the country she gave her life to save.

While she lived, St. Joan of Arc was one of the Church's most misunderstood saints both inside and outside the Church.

As a young girl of 13 she received visions of St. Michael the Archangel, St. Catherine of Alexandria, and St. Margaret of Antioch who gave her the extraordinary mission to help the King of France reconquer his kingdom, which at that time was being overtaken by England. These saints did not give this mission to a valiant knight or an influential noble; they came to an unlikely peasant girl. As we know from Sacred Scripture, God often uses the weak to shame the strong.

A few years later Joan began to make the moves necessary to gain an audience with the King, but not without much hardship. In order to be faithful to heaven's command, she had to endure much opposition. She was ridiculed and maligned, and understandably so, because what does a young peasant girl know about military campaigns and wars? Especially one who "hears voices" asking of her impossible things? Surely, she must be a deluded young woman.

However, with much determination and persistence, St. Joan finally gained admittance to the Dauphin (the eldest son of the King of France and heir to the throne) and said to him, "Most noble Dauphin, I am come and am sent to you from God to give help to the kingdom and to you." 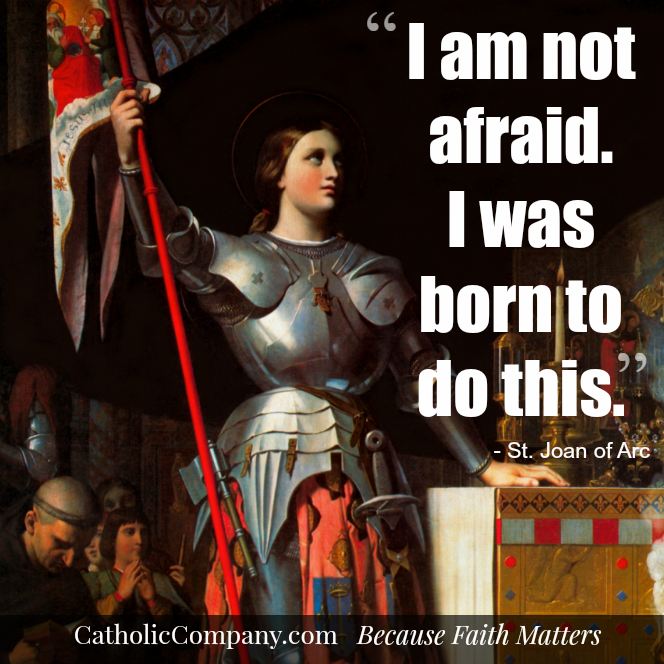 After her bold petition to the Dauphin, she was granted a small army. She was by then 17 years old.  With her army, which she commanded with surprising prowess, she led the French troops to key victories in the infamous Hundred Years' War between France and England.  Her victories, while she carried a banner with the names of Jesus and Mary, paved the way for the coronation of Charles VII of France.

Joan of Arc did what she was called to do, and the French King was crowned at her side.

She was soon after captured and handed over to the English as a prisoner of war. The French did not come to her rescue; however, Joan of Arc knew from the saints who visited her that she would die a martyr.

She was put on trial under the ecclesiastical court and not in the secular court, yet her trial was fraught with political pressure, intrigue, abuse, and deceit.  When facing her tribunal, Joan of Arc steadfastly refused to renounce her claim that saints from heaven spoke to her; she was therefore condemned to death as a heretic and sorceress.

This was a sad moment in Church history, when a saint was condemned to death by a bishop. Joan of Arc was burned at the stake on May 30, 1431 at the age of nineteen. She called for a crucifix to be brought and placed before her as she died, calling out the name of Jesus.

Twenty-five years after her execution, an inquisitorial court—authorized by the Pope—re-examined the trial, declared that it was conducted unlawfully, and pronounced Joan innocent and a martyr of the Catholic faith. Centuries later, St. Joan of Arc was beatified in 1909 and canonized in 1920. 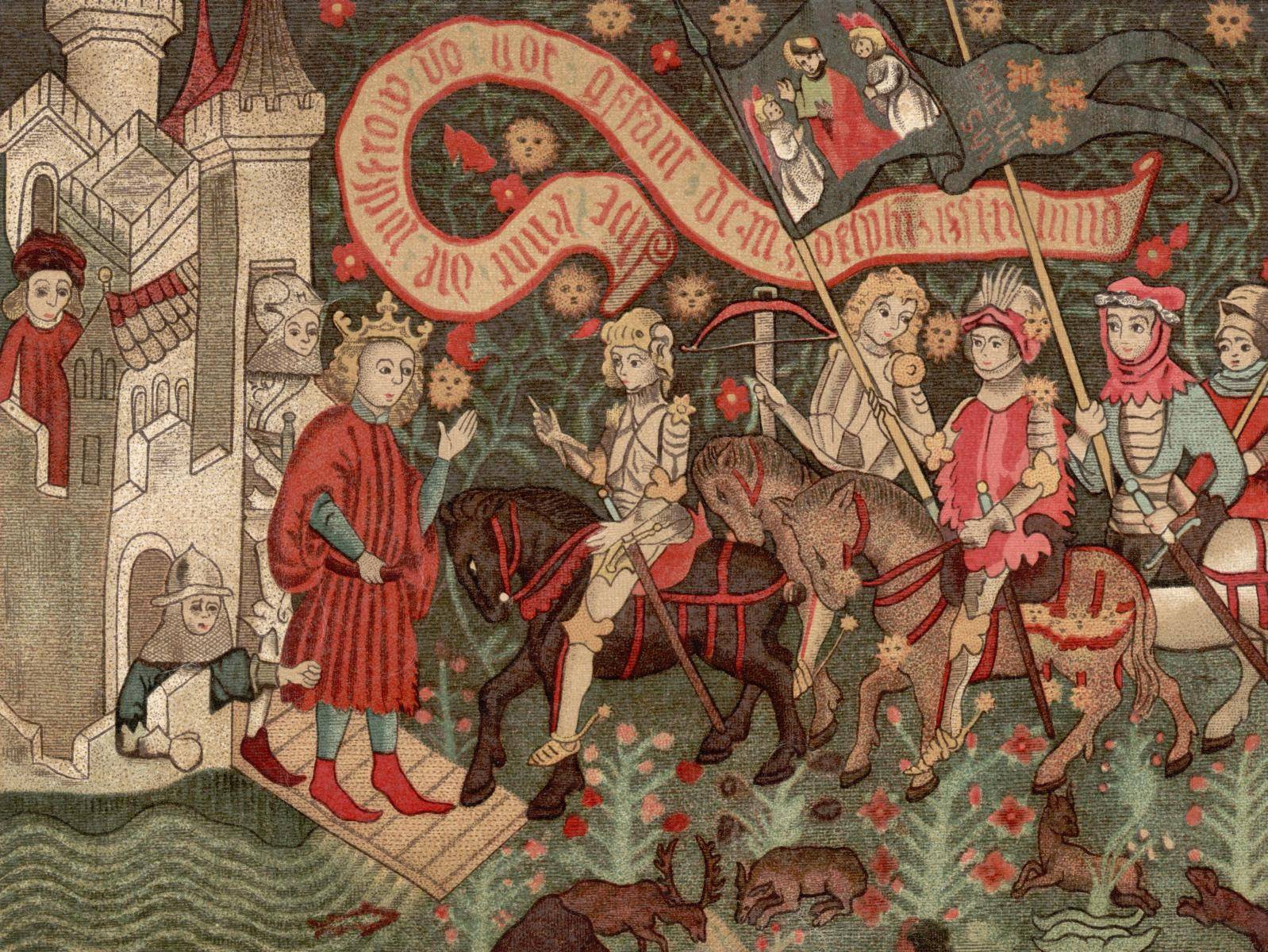 Below is an excerpt with more about the life of this incredible saint:

"St Joan stands alone in history. Many women have found sanctity in the cloister, some have shown bravery in battle, but no other ever trained herself to holiness in a soldier's camp, and surely no female saint ever died at the stake condemned by an ecclesiastical tribunal as a witch and a heretic.

Her story is incredible, but true: it rests on the most abundant and clear evidence.[1] She was a peasant girl of no importance and before she was eighteen her intervention had already changed the course of European history for centuries to come. When she died at nineteen, thanks to her the French had become conscious of being a nation, England had lost all hopes of ever being a Continental power, and Burgundy, the arbiter of the destinies of France, was soon again to be her vassal.

We cannot explain this by a mere recital of the diplomatic and military history of the times. The hand of God clearly appeared in these events. Joan of Arc was the tool He chose to accomplish His work: she is the explanation of the miraculous reversal of the fortunes of France which followed her appearance on the stage of history. . . continue reading here. 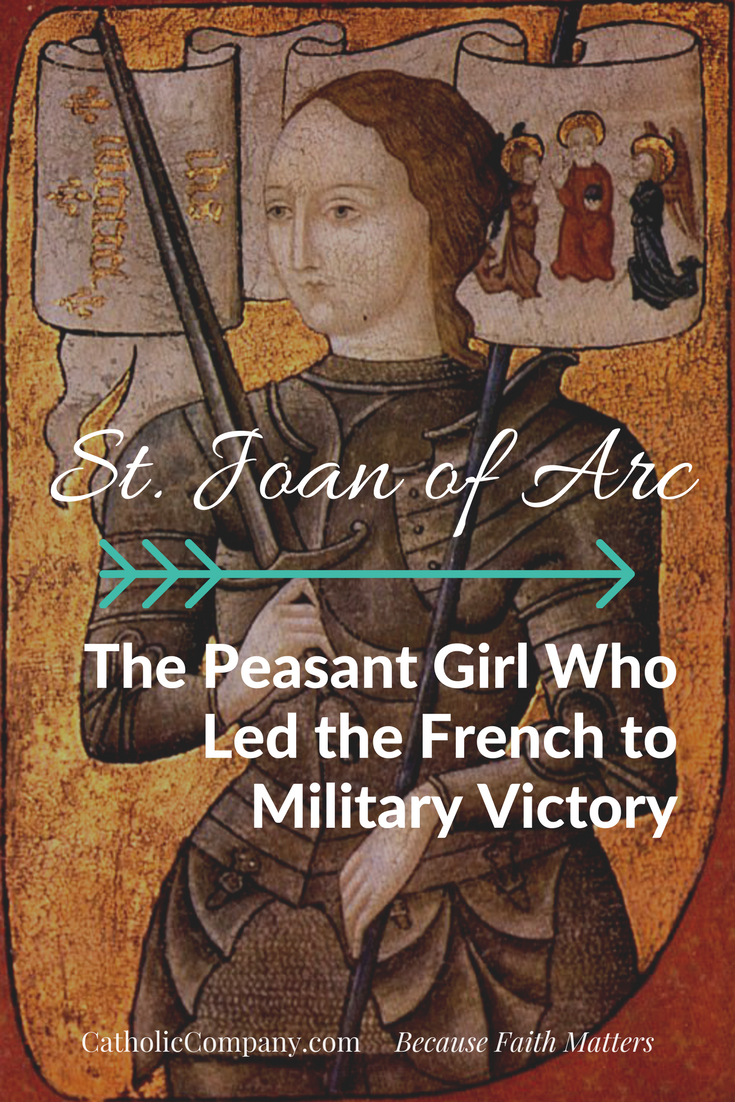