Free standard shipping (Contiguous U.S. only) will be automatically applied on orders $75 or more. Other restrictions may apply. Please see shipping page for more information.

April 20 is the feast day of one of my favorite saints. She was not a child martyr like her Roman namesake. She was an Italian Dominican whom St. Catherine of Siena referred to as “Our Mother, the Glorious Agnes.”

In fact, in 1347, the Lord revealed to St. Catherine that she would enjoy glory equal to St. Agnes in Paradise, which is indicative of the holiness of this little-known nun, saint, and mystic.

After St. Agnes showed her merciful intercession to my family during an overseas travel mishap, I developed a special devotion to her. What better time to share her story with you than her feast day, April 20th, because she is one of the many unknown saints whose holiness enriches and enlivens our Faith.

Upon her birth to a noble family in 1268, showers of beautiful light surrounded her house, foretelling her heavenly glory. By the tender age of six, she was already begging her parents to let her join a convent, so great was her love for God. They allowed her to make frequent visits to the convents in the area, accompanied by her mother and the women of her household.

On one such visit, a prophetic event occurred. They passed a hill on which stood a brothel, and a flock of crows swooped down, attacking only Agnes. The women fought them off as they scratched and pecked at the child. Years later, Agnes was told by the Lord to build a Dominican convent on that very hill. 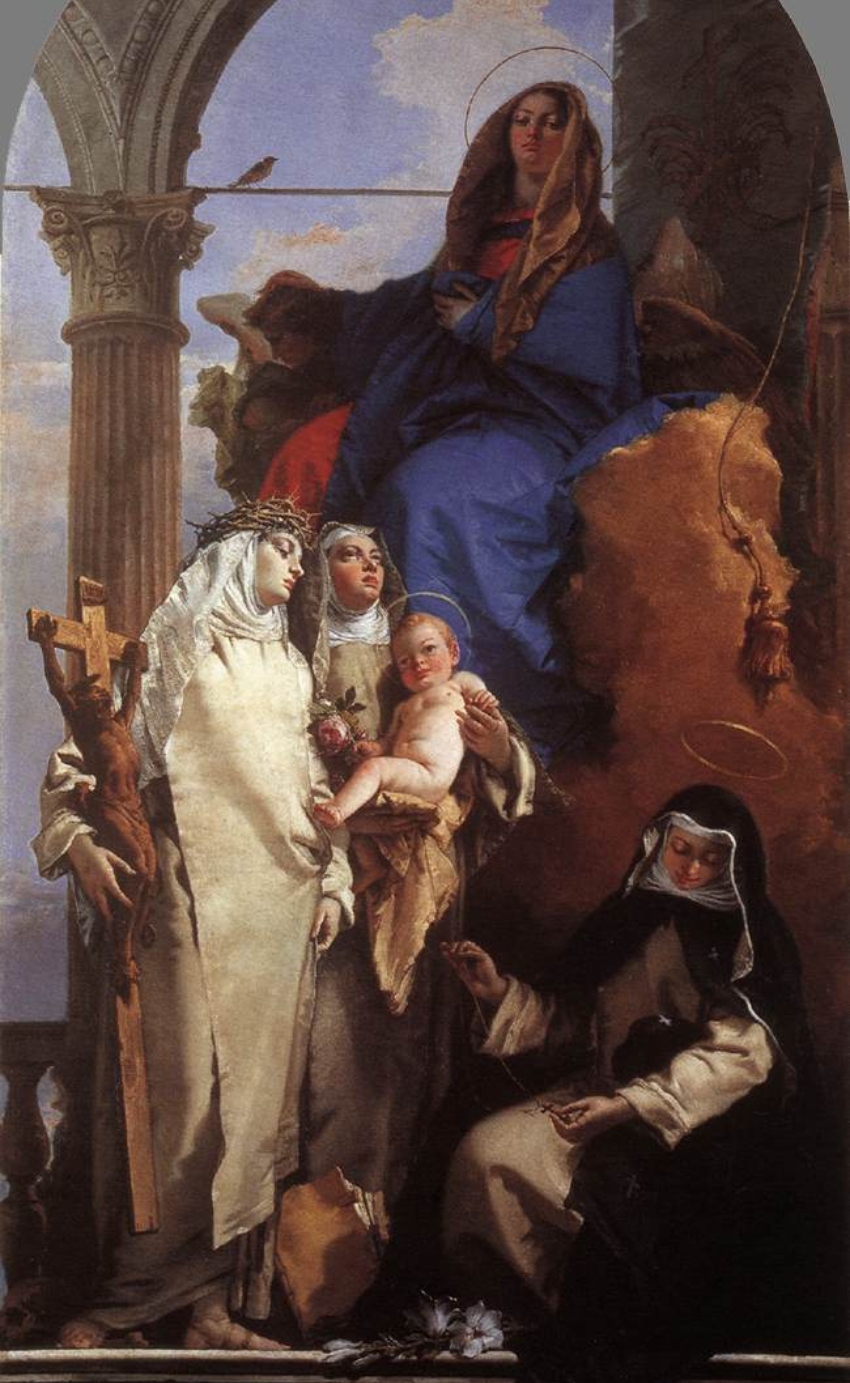 St. Agnes holding the necklace given to her by Our Lady (with St. Rose of Lima and St. Catherine of Siena)

Agnes joined the Franciscans at Montepulciano at the young age of nine. She rejoiced in the austerity, despite being the highborn daughter of an Italian noble. She reached a high degree of contemplative prayer and was favored with many visions.

In one of Our Lady’s visits to Sr. Agnes, she came with the Infant Jesus, who wore a beautiful gold crucifix around His neck. Mary allowed Agnes to hold and caress Him. Unwilling to let Him go, Agnes continued holding onto Him when Our Lady reached out to take Him back. She then returned from her ecstasy with the golden crucifix of the Infant Christ in her hand, and kept it throughout her life.

On another occasion, Our Lady appeared to Agnes and gave her three small stones. She told Agnes she must keep them in honor of the Holy Trinity, and that one day, she would use them to build a convent.

Her Role as Abbess

Agnes spent her years joyfully with the Franciscans, serving in many responsible roles. Eventually the Order asked her to move to Procena, where they were establishing a new community. Agnes attracted many young women to join the convent. Her sisters elected her Abbess at age fifteen, obtaining a Papal dispensation which was required because of her youth. On her consecration day, a shower of white crosses like flowers fluttered down on all those in the chapel and nearby, showing heaven’s favor.

For twenty years, Agnes lived in Procena as a Franciscan nun and Abbess, penetrating the secrets of God in prayer. She was a careful superior, a miracle worker, and a renowned mystic. She would pray over the food supply when it was low, take a handful of bread from the kitchen, and miracuously feed not only the nuns, but the poor of the community—with the fruit of her prayers.

Her self discipline was legendary. She lived on bread and water for fifteen years, slept on the floor of her cell with a stone for a pillow, and received Holy Communion from the Angels. When she would kneel outdoors in prayer, roses and lilies would spring up gently after she arose. 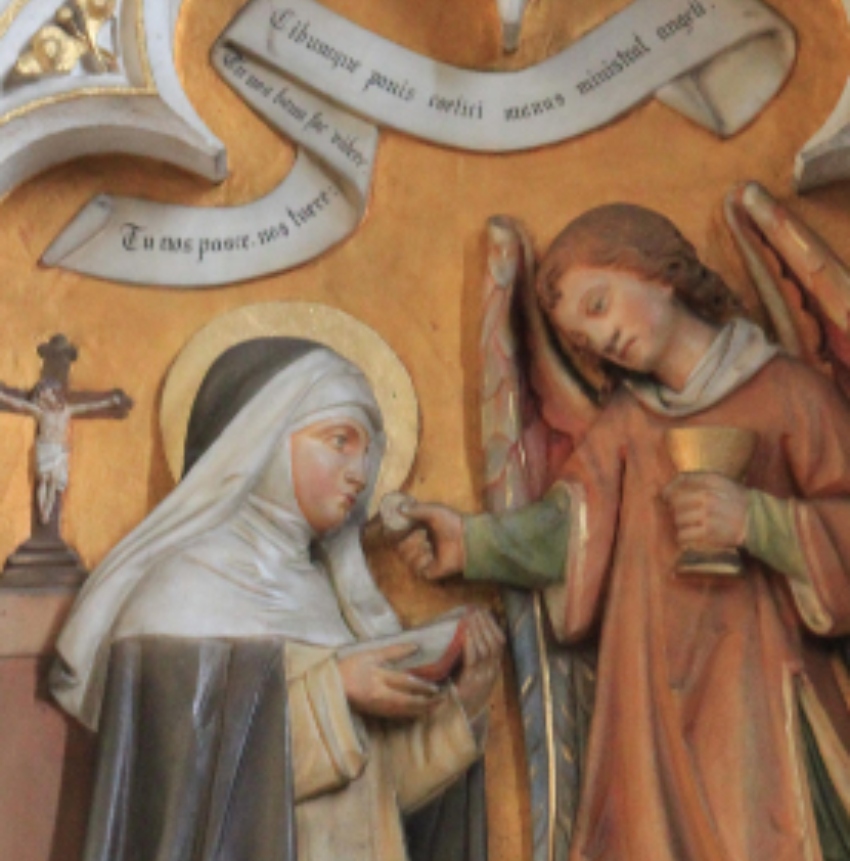 Her Return to Montepulciano

Our Lord told Agnes in a revelation that she must leave the Franciscans, with whom she had been so happy, in order to establish a Dominican Community in Montepulciano. She returned there, with the three stones from Our Lady, to put His words into action. Taken to the sight where the crows had attacked her so viciously years before, she heard Jesus tell her that this was to be the location of her convent!

The convent became a dynamo of prayer and penance, with many women joining because of Agnes’s sanctity. Over time, her health began to fail, and her sisters took her to the baths at Chianciano for treatment. Though they did not heal her, she performed a miracle at the spot when a child fell in and drowned. Praying over him, she restored his life, and a miraculous spring of healing welled up that still exists today, known as the waters of St. Agnes.

Returning to Montepulciano, Agnes faced death, telling her grieving nuns, “Be not afflicted by my departure. From heaven I shall be your Mother, your sister, and your companion. You will discover that I have not abandoned you. You will possess me forever.”

She died on April 20, 1317, which is now her feast day. Her tomb in Montepulciano immediately became a place of pilgrimage.

Perhaps the most famous pilgrim was St. Catherine of Siena, whose niece, Eugenia, entered St. Agnes’s monastery in Montepulciano. As St. Catherine contemplated bending down to kiss the foot of her spiritual mother, she was amazed to see Agnes raise her leg, so that the holy Catherine did not have to stoop! 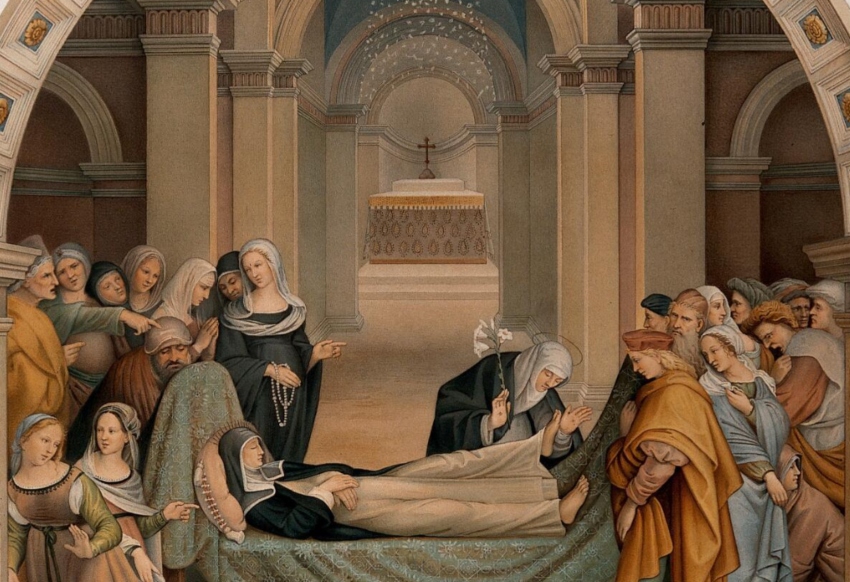 I had the privilege of venerating St. Agnes in Montepulciano many years ago. Captivated by the tiny hill town in Tuscany, I attended morning Mass there, not knowing her story.

Her body was enclosed in glass, incorrupt, resembling that of St. Clare. After Mass, everyone immediately formed a line and began to process up to the altar, uttering prayers and kissing the glass. I followed, not quite sure what was happening, but intrigued to find out.

When it was my turn, I thanked her for her holy example and vowed to learn more about her as I kissed the glass. 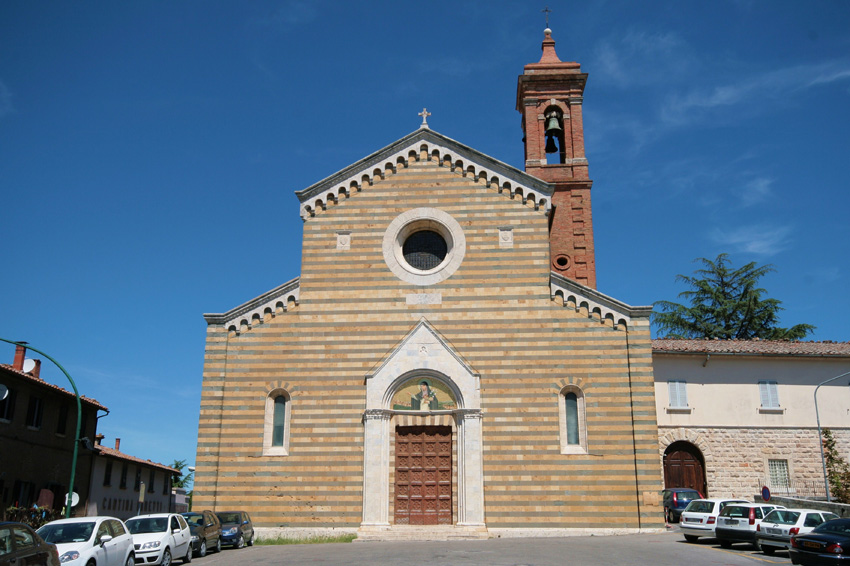 The church where I first encountered St. Agnes in Montepulciano, Siena, Italy, now her shrine

The evening I made that promise, my husband and I were stranded in rural Italy in the middle of the night. We had had a very late and leisurely dinner in another town, finishing a little before midnight, and became lost on our way home. Never one to ask for directions, my husband continued driving, doing his best to navigate, certain that he would find the way back.

There were no lights, signs, maps, or directions. We did not know the area, and we unknowingly wound our way up what we thought was a treacherous dirt road that turned out to be only a footpath connecting the nearby hill towns.

Our rental car kept stalling on the steep hills as we drove on the path in the dark, isolated area. I became frightened, and I am sure I was even more demanding and annoying than usual! I insisted my husband stop the car, telling him we had to find a way to turn around, even though he said it was not possible. We were in a remote area and this path was barely wide enough to accommodate our small rental car.

My husband was doing his best, but became irritated with my pleading and worrying. As he tried to do what I asked, our car got stuck on an embankment. We could not free it, and we could not move. We eventually climbed slowly and fearfully out of the passenger side of the car, with the front tire of the driver's side resting on the edge of an embankment, overlooking the blackness of the Tuscan hills after midnight.

Choice words were definitely used, and I deserved them, I'm certain! We had no idea how to escape the predicament and no cell phone coverage. While my poor husband evaluated our options, I knew I had already pressed him enough that now, remaining quiet and praying would be best.

I then remembered my promise that morning to St. Agnes of Montepulciano. In desperation, I prayed the Rosary and at the end I said, "St. Agnes, I beg you to deliver us!" I promised to make her known and cause her to be invoked.

Seconds later, sometime after 1 am, in the desolation of the Italian hill country and complete darkness, we heard voices! We had not seen anyone for miles, but at that moment, two men on foot appeared out of nowhere. They were returning home from a wedding several miles away, walking back to their town on our path, which one of them explained was not meant for cars at all, but for traveling on foot between the small towns. 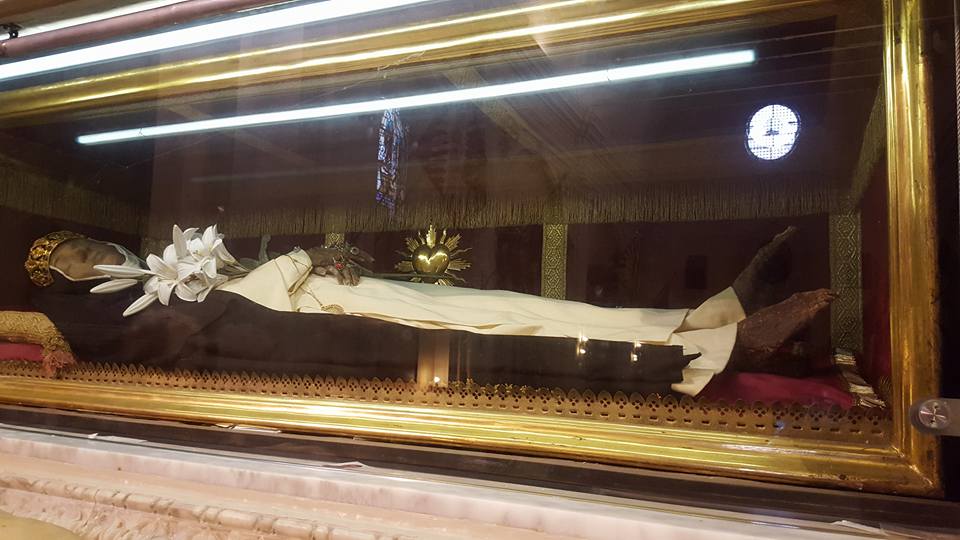 The glass encasement of St. Agnes, on the altar, where I kissed her coffin and vowed to learn of her

The men were helpful and friendly, even in the middle of the night. One was a baker on the way to his bakery to start his bread for the day. He spoke no English. The other was a Polish man who told us he was one of the few persons fluent in English in this remote area. With his cell phone, he called a tow truck. He also mentioned that this happened just last week to another group of tourists, so we should not feel badly. That did not help my husband but it made me feel much better!

Together, the Polish man, the Italian baker, the tow truck driver, and my husband managed to get the car off the embankment and into the center of the path. The truck driver towed it to the nearest town, driving in reverse all the way, since he also was unable to turn around on the footpath. We arrived home safely after 4 am, thanks to the intercession of my dear St. Agnes and the kindness of those she placed on our path—quite literally.

Now that I have claimed her patronage, I frequently recall her words: "I will be your Mother, your sister and your companion...You will possess me forever."

It has been a great privilege to be counted among her spiritual friends. She is the patroness of Siena, Italy and a powerful intercessor before the throne of God. If you are looking for new friends among the saints, invoke her in your needs.

St. Agnes of Montepulciano, pray for us!