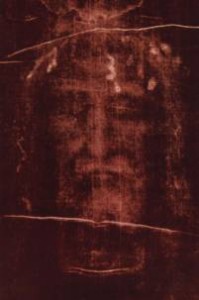 Even today there is not much devotion to the Holy Face of Jesus but rather curiosity. This curiosity has been sparked by two highly controversial items which are without a doubt linked. These two items are the Veil of Veronica at Manoppello, Italy and the Shroud of Turin in Turin, Italy.

The Shroud of Turin

The Shroud of Turin is a linen cloth which supposedly bears the image of a crucified man and some speculate that the crucified man is indeed Christ and that the Shroud could be one of His burial cloths. The Shroud of Turin is without a doubt at least as old as the 14th century and beyond that there is much debate. Whether or not the Shroud is actually from Jesus, it is still remarkable that it has survived to the present day. This Shroud has been restored numerous times as it has undergone fires and poor treatment throughout most of its history. The Shroud is the single most studied artifact in human history. I have never seen the Shroud personally but images online alone astound me and the Shroud seems to me to definitely be, according to Pope Pius XII, an image in association with Roman Catholic devotions to the Holy Face of Jesus.  Pope Benedict XVI states that the Shroud of Turin is, “an Icon written in blood, the blood of a man who was scourged, crowned with thorns, crucified and whose right side was pierced."  When the Shroud was put back on display in 2010 it is reported that 2 million visited it.

The Veil of Veronica at Manoppello, Italy

The Veil of Veronica at Manoppello, Italy is said to be that very veil used by Veronica on Jesus Christ. The Veil of Veronica, according to historical records, was until 1608 kept at the Vatican. During the Vatican Chapel revival in the year the veil was stolen and some say it has resurfaced in Manoppello, Italy which is 150 miles outside of Rome. The Veil was visited in 2006 by Pope Benedict XVI which leads many to think that he finds it to be authentic. It is hard to tell how authentic the Veil is but many point to the fact that it is made of byssus which was only used in ancient times and cannot be painted on. The image on the Veil also displays the same face as that of the Shroud of Turin. The Veil of Veronica, much like that of the Shroud of Turin, is an Icon which can draw us to a greater devotion to Jesus and understanding of his sufferings despite its authenticity. Friar Emiliano, one of the Capuchin guardians of the Veil, stated that the pontiff “like many pilgrims, comes not so much to see Christ’s face on Veronica’s Veil but to be seen by it, to be loved by the eyes of the Lord.”