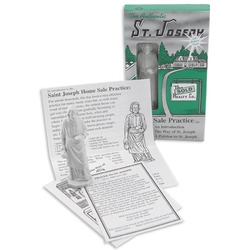 When I started working at the Catholic Company I instantly learned a great deal about the Catholic faith.  I didn’t know anything about scapulars, mantillas, and especially St. Joseph Home Selling kits, despite being Catholic my entire life.  I quickly learned that thousands if not millions of people in the U.S. have used St. Joseph kits to ask this beloved saint's help and intercession while trying to sell their homes. Catholic and non-Catholic alike have taken part in this pious tradition!  I even learned that some realtors include St. Joseph Home Selling Kits with the other services such as “For Sale” signs and the like. After seeing the St. Joseph Kit, I simply had to learn more about it.

The first thing I wanted to uncover was the origin of St. Joseph statues and their connection with selling homes.  Through some research I discovered that the origin seems to be a bit ambiguous.  Some point to nuns in the Middle Ages who buried a St. Joseph medal and asked St. Joseph to intercede in their request for a convent.  Others point to the tireless work of Brother Andre Bessette in promoting St. Joseph and, according to some legends, burying St. Joseph medals in land he desired to buy for the St. Joseph Chapel he eventually constructed.  Either way the practice became popular in the US during the real-estate busts of the 1980s and 1990s, according to “Home sellers seek help from a saint” at latimes.com. I'm sure they are popular now as well due to the poor housing market and the usual summer home selling season.

After looking at the origin, I quickly found many success stories.  Thousands of people had their houses on the market for months, if not years, and it would sell within weeks of planting the St. Joseph statue!  Some even had the house sell the next day!  It is important to note that most of these people did not just plant the statue but they also prayed the St. Joseph Home Selling Kit prayer daily, at least.  Despite the many successes, I still think some have slipped into superstition.

What do I mean by this?  I found many who say that you have to bury the statue upside down, or near the entrance of your house, or near the “For Sale” sign, or facing the house.  Do you think St. Joseph really cares where you bury the statue?  I don’t think so personally, but I don’t know maybe he does?  I thought that I would share my favorite St. Joseph Home Selling story with you because, well you’ll see:

“One impatient man moved his statue from the front yard to the backyard to the side of the house and finally threw it in the trash. A few days later the frustrated seller opened the newspaper and saw the headline ‘Local Dump Has Been Sold’.” From snopes.com.

Have you ever sought the intercession of St. Joseph to sell a home?  Did it work?  Would you recommend using a St. Joseph Home Selling Kit to sell your home?