"Call me and call my image Santa Maria de Guadalupe"

December 12th  is the feast of Our Lady of Guadalupe, patroness of the Americas, unborn children, and the New Evangelization.

The historical story surrounding this Marian apparition is truly fascinating. There are so many details regarding the time period and culture to which the image was revealed that combine to make this a truly significant apparition, not just for the Americas or for the Catholic Church, but for all of humanity.

Related: America and the Immaculate Conception

The Blessed Virgin Mary appeared to St. Juan Diego in the 16th century in present day Mexico City, Mexico. Juan Diego saw an apparition of the Blessed Virgin on the Hill of Tepeyac on December 9, 1531, which happened to be the feast day of the Immaculate Conception in that time. Our Lady requested that a church be built on that site, which Juan Diego dutifully relayed to the bishop.

After a request by the bishop to prove her identity, Our Lady asked Juan Diego to gather roses that were growing on the hill (which were neither native to the area nor in season) and take them to the bishop. Juan Diego obeyed and placed the roses in his tilma (or cloak) to carry back to the bishop as evidence of Our Lady's appearance.

Upon opening the tilma to reveal the miraculous roses to the bishop, there was something even more miraculous present in the tilma—a striking image of the Blessed Virgin Mary. 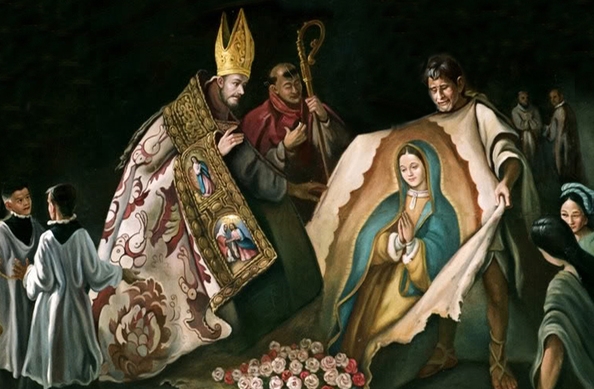 In the image Our Lady wears the traditional garments of an Aztec princess.  A black sash around her waist was a cultural tradition among the Aztec women that indicated pregnancy.  All the elements of the image point to Our Lady as being above the gods the Aztecs worshiped, while at the same time showing that she herself was submissive to the true Creator God while being pregnant with the Divine God-man that grew in her womb.

By using only cultural symbols and no words, which the Aztec people could read as a codex, the miraculous image on the tilma spoke the truth of the Christian faith that the Spanish Catholic missionaries proclaimed.

Read: The Miraculous Image of Our Lady of Guadalupe

A mass conversion of millions upon millions of Aztecs to the Catholic faith soon followed—ending the human sacrifices, especially child sacrifices, that they practiced. Many Church historians also connect this mass conversion of souls to the Catholic faith as heaven's balance to the massive number of souls who left the Church during the Protestant revolt, a tragedy which was happening during the same period in Catholic Europe. 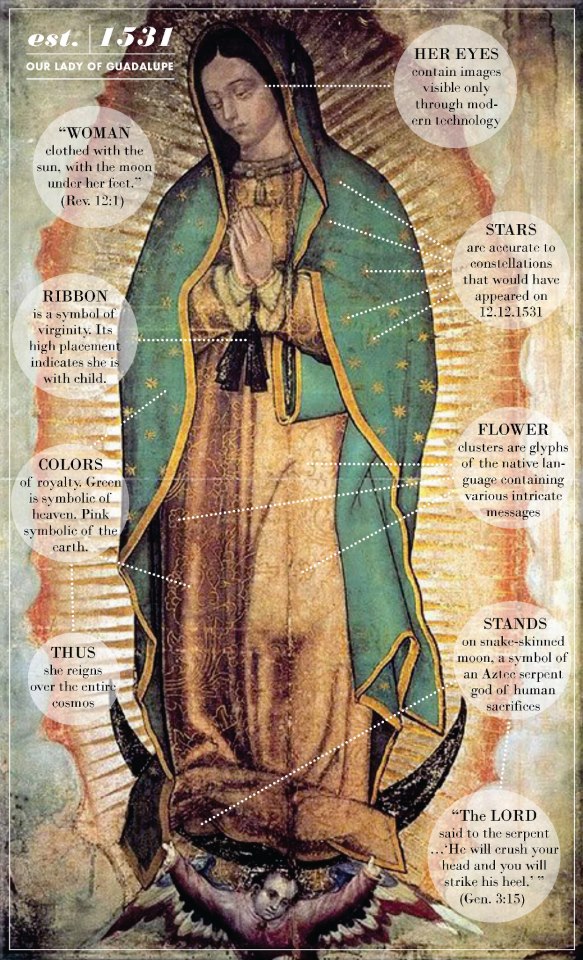 A church was built at Our Lady's request on the Hill of Tepeyac to mark the apparition site, and today it is the most visited Catholic pilgrimage shrine in the world. Venerated in this cathedral is the original tilma of St. Juan Diego, which still displays the miraculous Our Lady of Guadalupe image. The image has been subjected to scientific testing to prove its authenticity and miraculous properties. Click here to read more about this Miraculous Image.

Today, Our Lady of Guadalupe has become an important part of the Catholic faith and religious culture in the Americas. The image of Our Lady has inspired millions of conversions and continues to inspire devotion to the Blessed Virgin. There are a number of Our Lady of Guadalupe gift ideas and books to honor this special and unique apparition of Our Lady, including rosaries, prayer cards, and jewelry.

Keep reading: Show your devotion - Celebration Ideas For The Feast of Our Lady of Guadalupe

This article has been updated and was originally published in December 2012. Copyright © The Catholic Company. All rights reserved.