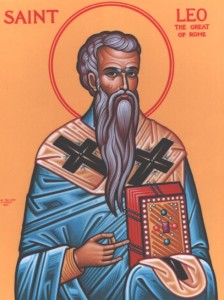 Papal Years: According to newadvent.org, “Leo's pontificate, next to that of St. Gregory I, is the most significant and important in Christian antiquity.” They make this claim as Pope Saint Leo the Great devoted himself to unifying the Church and combating heresy. He is especially remembered for fighting the Manichean and Pelagian heresy with incredible strength. He presided over the Council of Chalcedon in 451 at which Christological compromises between the West and the East were met, putting it clearly that Christ had two full natures.

Pope Saint Leo the Great should be known as the Great Persuader because: