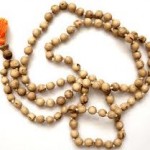 Hinduism is thought to be the first religion to use prayer beads.  They use their prayer beads to keep track of the amount of times they repeat a mantra or name of a deity.  A mantra is a word or series of words chanted aloud or silently in order to invoke spiritual qualities in the person chanting.  Praying with Japa Mala beads seems to be meditation for the sake of self-betterment. 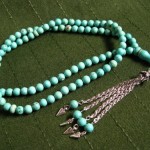 Islam’s Tesbih is essentially a meditation on God or Allah.  The Tesbih is made of 99 beads, corresponding to the 99 names of Allah, broken into 3 sections.  In the first section you repeat the English equivalent “Praise be to God,” then in the second section you repeat “Glory to God,” and in the last section “God is the greatest.”  Sometimes the Tesbih only has 33 beads and one cycles through the beads three times.  This prayer seems to also be said as a meditation but it was given by Mohammed to the poor in order that they might “catch up with those who have surpassed you (those surpassing are the wealthy)” (Book #12 Hadith #804).  It seems that this prayer, like the Japa Mala, has been used for self-improvement and betterment. 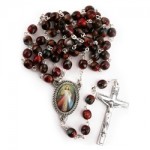 In Christianity there many different types of prayer beads.  The most popular is by far the rosary in which one meditates on the mysteries of Christ as well as petitions the Mother of God. Chaplets are similar to the rosary but with only ten prayer beads and are often associated with a particular Christian devotion.  The chotki are prayer beads used in the Eastern Orthodox Church as a means of praying the Jesus Prayer (very similar to the Tesbih).  Prayer Ropes are also used by the Orthodox as a means of counting prayers. Christian Prayer Beads are a sort of hybrid between the chotki and the rosary.  Christian prayer beads are also used by Christians outside of the Catholic and Orthodox Churches as both a meditation and a petition of God.