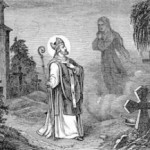 Saint Malachy was born of Irish nobility in Armagh in 1094. He was ordained at the age of 25 after the death of both of his parents. He served as Abbot at Bangor, Bishop of Connor, Ireland, and Archbishop of Armagh. Saint Malachy introduced uniformity in Ireland by replacing the Celtic liturgy with the Roman liturgy and was a noted healer.

Saint Malachy, as you can see, was an incredible Saint but what makes sets him apart?

The Prophecy of Saint Malachy

As I have already mentioned, it is the Prophecy of St. Malachy concerning the line of popes that sets him apart from all other saints. According to tradition, he had a vision while in Rome of the line of popes and to each there was a phrase describing him. Such as Crux de Cruce (Cross from a Cross) or Lumen in Caelo (Light in the Sky). Many have taken the time to find the connection between these phrases and the popes they match up with (some connections are far more of a stretch than others). According to the prophecy, there is one more pope following Saint Benedict XVI before the prophecy jumps to Petrus Romanus (Peter the Roman) whom will be the final pope.