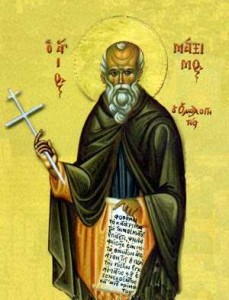 Early Life: Saint Maximus the Confessor was born to Byzantine nobility and quickly became involved in Byzantium's political atmosphere. After being chief secretary to the Emperor Heraclius, he had a powerful conversion experience that would change his life forever.

Introduction to religious life: Upon leaving his position, he became a monk and spiritual student to Saint Sophronius. He quickly ascended to the position of Abbott of Chyrysopolis. However, the monastery was continually assaulted by the Persians and therefore St. Maximus the Confessor moved to Carthage.

The Uniqueness of St. Maximus the Confessor

To harbor no envy, no anger, no resentment against an offender is still not to have charity for him. It is possible, without any charity, to avoid rendering evil for evil. But to render, spontaneously, good for evil - such belongs to a perfect spiritual love.”