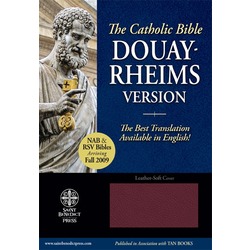 The History of the Douay-Rheims

The Case for the Douay-Rheims Bible

-          The Latin Vulgate Bible was THE Bible of the Western Church for over a thousand years.  In fact, Pope Pius XII stated in his encyclical letter Divino Afflante Spiritu, that the Vulgate is “free from any error whatsoever in matters of faith and morals.”

-          The Vulgate is also supreme in that St. Jerome, who translated from the original languages to the Latin Vulgate in the 4th century, had a better understanding of the meaning of Greek and Hebrew words than we do many thousands of years later.

-          St. Jerome also had older texts of the Catholic Bible in the original languages than we currently have today.

-          According to some, these facts alone make a translation of the Bible from the Vulgate a better translation than from original texts which are younger than the ones St. Jerome used.

-          Some further argue that the Douay-Rheims Bible leaves some passages obscure instead of doing what some modern Bible translations do, and that is add their interpretation in order to make a passage more readable.