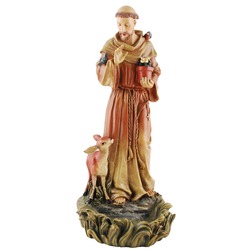 Many St. Francis Statues include images of St. Francis with birds.  According to legend, St. Francis would preach to the birds and encourage them to be thankful to God for their beauty.  Legend also has it that birds would be silent when he spoke and only left his side when dismissed by him.

St. Francis is also typically represented with a wolf.  This struck me as a bit odd at first until I found this legend:  It is believed that St. Francis came upon a village in his travels that was going to kill a wolf because it was attacking children.  St. Francis convinced the village not to kill the wolf and instead he spoke with wolf.  After the meeting the wolf never harmed the children and was instead taken in as a pet by the village.