St. Anne Line was born Alice Higham, eldest daughter of a well-off Puritan landowner whose father was a reformer for King Henry VIII of England. She converted to Catholicism in her 20's, during the reign of Queen Elizabeth I and the persecution of Catholics in England.

Anne eventually sacrificed her life to protect Catholic priests and seminarians during the persecution. She is one of the 40 Martyrs of England and Wales who died during the Protestant Reformation. Anne's story inspired and moved many, (including perhaps Shakespeare, more on that later!) and also has applications to our modern times. 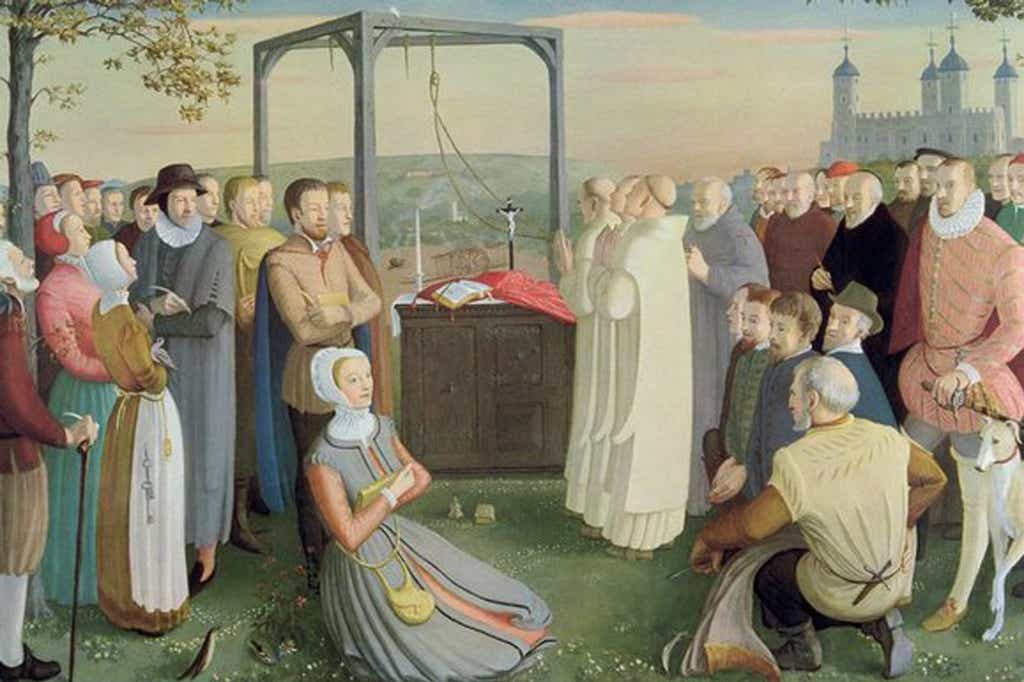 The Price of Conversion

When she converted to Catholicism, Alice, who took the Catholic name "Anne", was disowned by her family. Her brother and husband converted with her, but were soon arrested for attending Holy Mass. They were imprisoned, and her husband Roger was banished to Belgium until his death.

The young Anne became active in the clandestine movement to shelter priests, managing a safe house opened by Fr. John Gerard, SJ. She also established "priest holes" in the homes of fellow Catholics.

Priest holes were designated hidden spaces under floorboards, in cupboards, and other small places, where the authorities would be unlikely to find priests and seminarians during Protestant raids. They were generally difficult to move within, and no more than three feet wide by nine feet high, to avoid discovery. They still exist today in English houses where faithful Catholics from the Elizabethan age once lived.

A priest hole in the floor of a London home.

Keeper of the Safe House

When Fr. Gerard was captured and imprisoned in the Tower of London, Anne became fully responsible for the house and the network of secret hiding spaces hidden throughout London. Father escaped the Tower after months of torture and secretly ministering to those imprisoned with him.

His escape was carried out by a group of faithful Catholic men, including Nicholas Owen, the gentleman who designed and built many of the priest holes in the London area. Father could not return to the safe house because he was being hunted by the Queen's men. He made use of St. Anne's priest holes, sometimes for up to 9 days at a time, while continuing to minister to Catholics in England.

Anne became well-known as a sympathizer. Authorities suspected her of aiding the priests and seminarians and practicing the Faith. The penalty for this crime was death. She gave up running the main house in order to safeguard the men residing there.

Secretly, she began establishing a network of apartments throughout London where seminarians and priests could hide more comfortably and safely as they traveled to minister throughout the country.  Anne saved the lives of many priests by securing these hidden spaces.

An underground safe room accessed through the ceiling and used for Holy Mass during the persecution of Catholics by Queen Elizabeth I.

Martyred for the Faith

St. Anne was finally arrested by the authorities when too many people attended Holy Mass in secret on the feast of the Purification, also known as the Presentation. The Catholic feast day was a popular one, because it contained the rite of Candlemas, the blessing of the candles to be used throughout the year. The large crowd attracted the attention of the Queen's enforcers.

Queen Elizabeth's raiders burst in, but Anne had already prepared a hiding place for the priest, Fr. Francis Page. He escaped arrest. During the chaos, many of the faithful also escaped, but the authorities arrested Anne and her counterpart, Margaret Gage. Margaret was pardoned, but St. Anne was imprisoned and sentenced to be hanged. 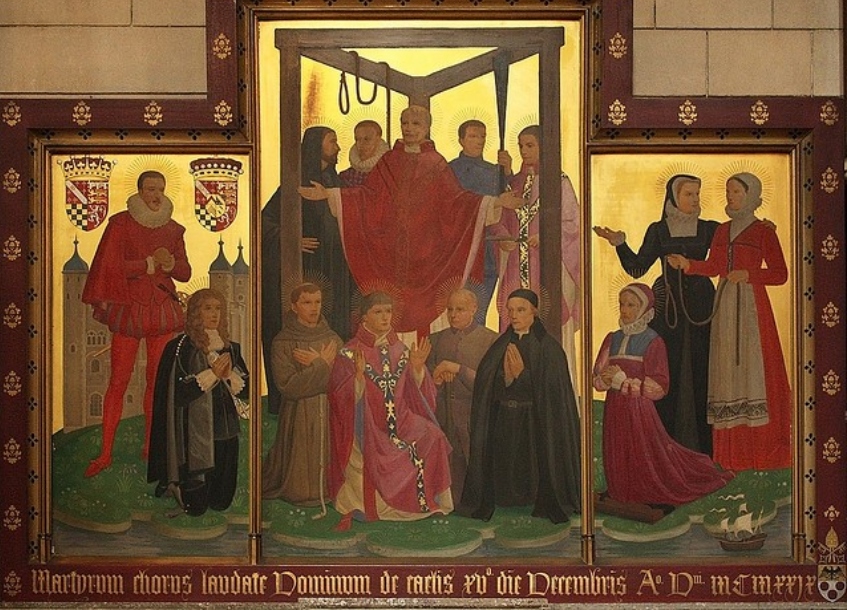 In this icon of the martyrs of England, St. Anne Line is seen kneeling in the right panel.

St. Anne Line was executed at Tyburne, on February 27, 1601, along with Father Mark Barkworth and Father Roger Filcock. She was hanged, and the priests were hanged, drawn, and quartered after watching her execution.

At the scaffold, she declared loudly to bystanders and gawkers,

"I am sentenced to die for harbouring a Catholic priest, and so far I am from repenting for having so done, that I wish, with all my soul, that where I have entertained one, I could have entertained a thousand."

Scholars believe St. Anne was the tragic muse for William Shakespeare's The Phoenix and the Turtle and the plight of Catholics he referenced in Cymbeline, as well as inspiration in the writing of The Tempest. Many scholars believe his Sonnet 74 is a tribute to St. Anne Line.

But be contented when that fell arrest
Without all bail shall carry me away,
My life hath in this line some interest,
Which for memorial still with thee shall stay.
When thou reviewest this, thou dost review
The very part was consecrate to thee.
The earth can have but earth, which is his due;
My spirit is thine, the better part of me.
So then thou hast but lost the dregs of life,
The prey of worms, my body being dead,
The coward conquest of a wretch’s knife,
Too base of thee to be rememberèd.
The worth of that is that which it contains,
And that is this, and this with thee remains.

Believed to have been inspired by St. Anne Line

Her Life Speaks to Us

The life and death of St. Anne Line speak to all faithful Christians in our modern age. While we may not suffer literal, physical martyrdom for the Faith, Christians today suffer a milder martyrdom some call "white martyrdom."

In our current culture, we may feel constrained by social pressures to keep silent about our deepest held beliefs, or at least to soften the language we use, to avoid offending others whose perspectives differ. Paradoxically, we are viewed as unloving and intolerant by those whose secular worldviews conflicts with the teachings of our Faith.

We feel the weight of this social conflict, knowing instinctively what we can and cannot say without offending, while the dominant culture continues to be swayed by passing trends and behaves however it pleases. Many Christians shrink at the thought of standing up for their beliefs because of this pressure.

In these challenging times, let us look to St. Anne Line and those who died for our Faith, and ask for the courage to live for it.

St. Anne calls us to be protectors of our priests and seminarians. They need our fervent prayers and sacrifices, and our daily support. These faithful men sacrifice their lives for us and bear the weight of our often Godless culture as their Cross.

She reminds us to unite ourselves with today's Christian martyrs. Catholic priests and other brothers and sisters in Christ throughout the world die every day for what we believe. They need our prayers and sacrifices.

St Anne Line is a model of faith in a world hostile to our beliefs. Let's ask her intercession for the strength to live our  convictions as she did, and the will to sacrifice everything for Christ and His Church.