It might be said that it was never more ablaze than in the hearts of these two holy saints.

Born to a well-known and pious French family in 1641, Claude eventually entered the Jesuit school at Lyon. After years of study and preaching, he became a member of the Society of Jesus. The Lord endowed him with significant intellectual gifts. 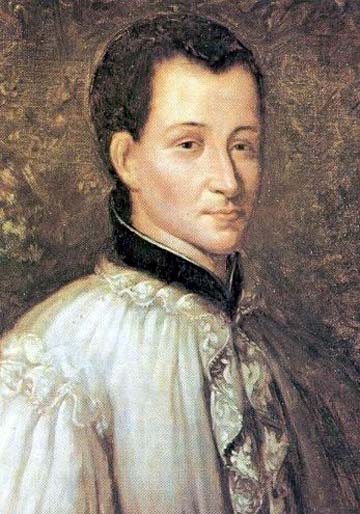 He was a constantly-joyful soul who loved writing and the arts. He was a magnificent preacher. But the font that nurtured his interior life was union with God through prayer, and the complete gift of himself to his Beloved. The world held no allure for him; those closest to him found his spirit of detachment astounding, so that it became known as one of his most remarkable traits.

At the age of thirty-three, the Holy Spirit inspired St. Claude with a burning desire to die completely to self and to the world. He wrote in his diary,

"I believe, Lord, it is time for me to live in You, and only for You, for at my age, You died for me in particular."

In 1675 the Jesuits named Claude superior of the small community at Paray-le-Monial, and rector of the Jesuit college there. At the same time, St. Margaret Mary was receiving revelations from Our Lord, with Jesus asking that she spread devotion to His Sacred Heart.

She had confided her experiences to a learned priest already but, lacking knowledge of mysticism, he told St. Margaret Mary that the revelations were the deception of the devil. This left her filled with anxiety and confusion.

Jesus was so moved by the prayers of His beloved bride that He sent St. Claude de la Colombière to be her faithful friend, confessor, and spiritual father. The Lord informed St. Margaret Mary of this in a locution. 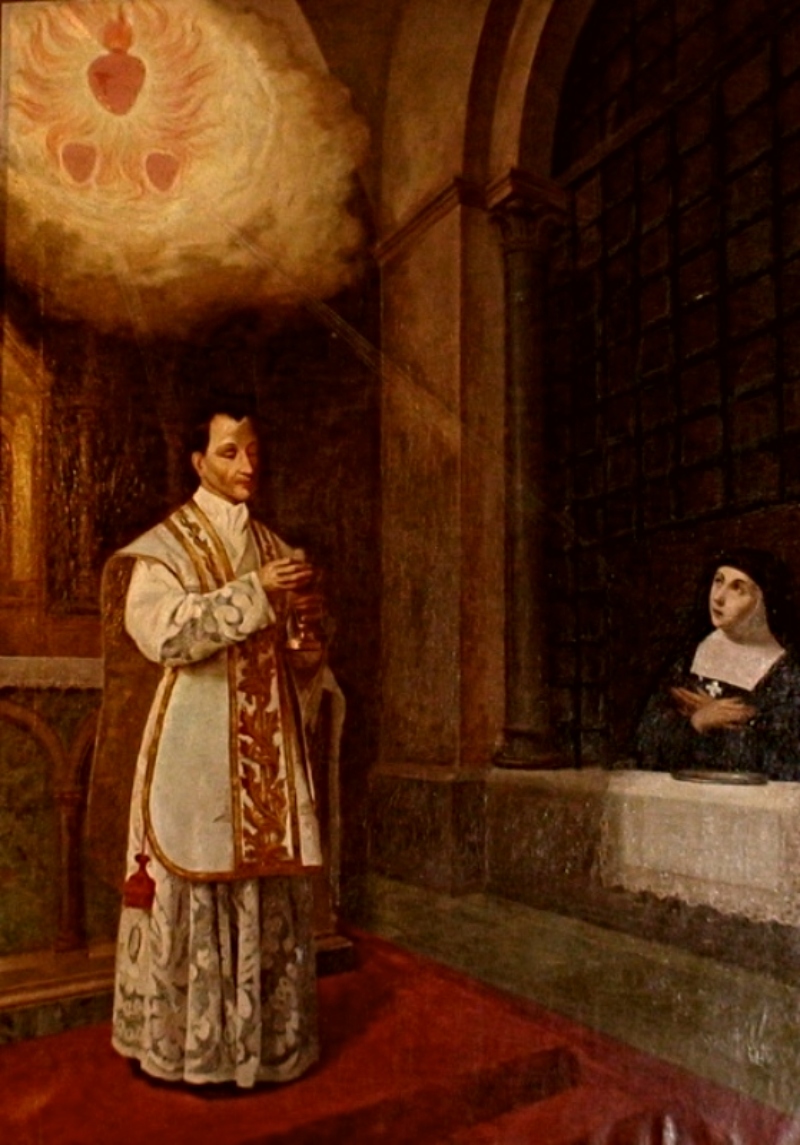 A Mission from the Lord

When Claude Colombière gave a retreat to her community, Sr. Margaret Mary heard Jesus speak these words within her heart:

Despite this confirmation, she struggled to reveal things while going to the holy priest for confession. Once she did, she was amazed that he treated her as if he were already aware of all that was occurring in her heart. This was a great relief and liberation to her, as she was being spurned and vilified even in her own community.

Claude assured Sr. Margaret Mary that her visions were authentic, and instructed her to write down all that she was experiencing. He pledged himself to promote devotion to the Sacred Heart and gave Sr. Margaret Mary the direction she needed to persevere despite scorn, disbelief, and opposition.

St. Claude dedicated his life to the propagation of the devotion, united in prayer and spirit with St. Margaret Mary Alacoque, even while many people—including other religious—dismissed her as insane. 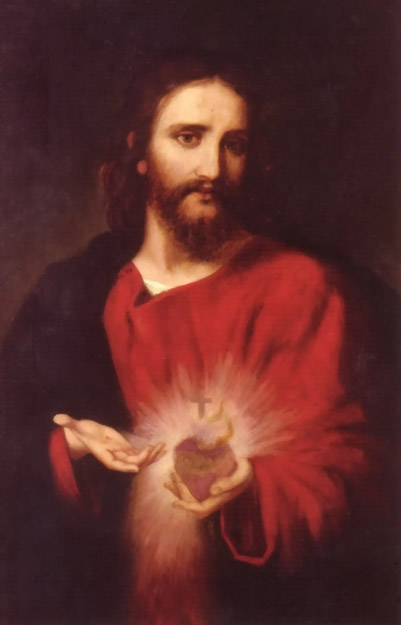 The Sacred Heart of Jesus

Exaltation of the Sacred Heart

The support of Claude de la Colombière prompted Mother Saumaise, Sr. Margaret Mary’s superior, to believe in the revelations. This allowed for the spreading of the devotion to the Sacred Heart, as Jesus had requested. Though the messages were St. Margaret Mary's, St. Claude de la Colombière was crucial in spreading love and devotion to the Sacred Heart of Jesus. Sent by the Lord, he removed obstacles to spreading that devotion.

Unfortunately, he was not to remain long in Paray-le-Monial. In 1676, the Order named him Preacher for the Duchess of York (the future Queen of England). He moved to London in hopes of reconciling former Catholics with the Church and fighting heresy there. He was convinced that the Sacred Heart devotion was the remedy for the many difficulties of the Faith, and also key in overcoming significant challenges with the Protestants of his time. Accordingly, his favorite subject on which to preach was the love of the Sacred Heart.

In 1678, a renegade Anglican priest claimed that the Jesuit “Papists” were seeking to assassinate Charles II, the King of England, in an effort to destroy the Church of England. This was a lie, and Claude was innocent of all accusations, but the English arrested him.

After intervention by the French King Louis XIV, he was spared death and imprisoned instead. The harsh environment and treatment significantly damaged his health, which had been failing already.

Return to Paray and Final Gift

St. Claude was terminally ill, and at the recommendation of doctors, eventually allowed to return to Paray. During this time, despite his serious decline, Sr. Margaret Mary and Fr. Claude communicated with one another, sharing their souls’ longings, their fervent devotion to Jesus and the Sacred Heart, and how to best spread the blooming devotion.

As his illness worsened, St. Claude considered relocating to a different climate, but St. Margaret Mary told him that Jesus desired him to stay in Paray.


"He has told me he wants the sacrifice of your life here."

Thoughts of departure immediately left him. He was to die for the Sacred Heart where he first encountered It—in Paray.

On February 15, 1682, St. Claude de la Colombière died, offering his soul to the Sacred Heart. The following day, St. Margaret Mary received the consoling news from Jesus that her spiritual father and dear friend was already in heaven, experiencing the glory of God. 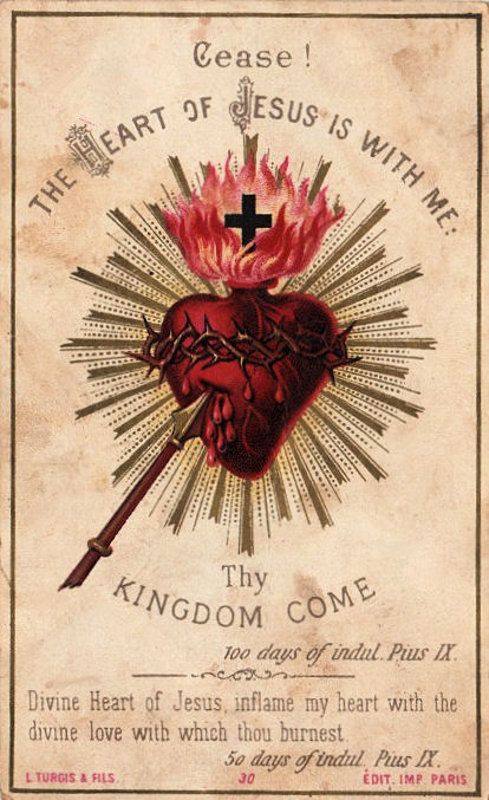 Act of Hope and Confidence in God by St. Claude de la Colombière

My God, I believe most firmly that You watch over all who hope in You, and that we can want for nothing when we rely upon You in all things. Therefore, I am resolved for the future to cast all my cares upon You. People may deprive me of my worldly goods and status. Sickness may take from me my strength and the means of serving You.

I may even jeopardize our relationship by my sin, but my trust shall never leave me. I will preserve it to the last moment of my life, and the powers of hell shall seek in vain to grab it from me. Let others seek happiness in their wealth and their talents. Let them trust in the purity of their lives, the severity of their mortifications, the number of their good works, and the enthusiasm of their prayers.

As for me, my Rock and my Refuge, my confidence in You fills me with hope, for you, my Divine Protector, alone have settled me in hope. “This confidence can never be in vain. No one who has hoped in God has ever been confounded.”

I am assured therefore of my eternal happiness, for I firmly hope in it, and all my hope is in you. “In you, Oh loving God have I hoped: let me never be confounded.”

I know too well that I am weak and changeable. I know the power of temptation against the strongest virtue. I have seen stars fall and foundations of my world crack; these things do not alarm me. While I hope in you, I am sheltered from all misfortune, and I am sure that my trust shall endure, for I rely upon You to sustain this unfailing hope.

“In You, O loving God, have I hoped: let me never be confounded.”

May the Heart of Jesus Christ be our School! Let us make our abode there. Let us study its movements and attempt to conform ourselves to them. Yes, Oh, Divine Jesus, I want to live there.
—St. Claude de la Colombière