What do the private revelations of St. Faustina Kowalska have in common with the events at Fatima? Visions of a destroying angel and of the Holy Trinity, the 13th day, a call to penance, and a fervent prayer for mercy.

The Blessed Virgin Mary chose to appear at Fatima in 1917 on the 13th day of the month from May to October, for the purpose of warning the world of its need for penance, and the impending dangers it faced if it did not—the first of which was a second world war.

In the years leading up to World War II, a related message was given to a young Polish nun named Sister Faustina Kowalska. On the 13th of September in 1935, St. Faustina received a vision in her convent cell. Similar to the earlier vision given to the three shepherd children at Fatima, Faustina's vision was of an angel, who was ready to execute God's wrath in punishment for the sins of mankind, and of the Holy Trinity.

St. Faustina earnestly prayed for mercy as she beheld the destroying angel ready to unleash the impending judgment on the world. It was on this 13th day of the month that Our Lord revealed a prayer to St. Faustina known as the Chaplet of Divine Mercy.

As written in the Diary of St. Faustina:

"[The angel] was clothed in a dazzling robe, his face gloriously bright, a cloud beneath his feet. From the cloud, bolts of thunder and flashes of lightning were springing into his hands; and from his hand they were going forth, and only then were they striking the earth.

When I saw this sign of divine wrath which was about to strike the earth, and in particular a certain place, which for good reasons I cannot name, I began to implore the angel to hold off for a few moments, and the world would do penance. But my plea was a mere nothing in the face of the divine anger.

Just then I saw the Most Holy Trinity. The greatness of Its majesty pierced me deeply, and I did not dare to repeat my entreaties. At that very moment I felt in my soul the power of Jesus' grace, which dwells in my soul. When I became conscious of this grace, I was instantly snatched up before the Throne of God. Oh, how great is our Lord and God and how incomprehensible His holiness! I will make no attempt to describe this greatness, because before long we shall all see Him as He is.

I found myself pleading with God for the world with words heard interiorly. As I was praying in this manner, I saw the Angel’s helplessness: he could not carry out the just punishment which was rightly due for sins. Never before had I prayed  with such inner power as I did then. The words with which I entreated God are these:

Eternal Father, I offer You the Body and Blood, Soul and Divinity of Your dearly beloved Son, Our Lord Jesus Christ, in atonement for our sins and those of the whole world; for the sake of His sorrowful Passion, have mercy on us.

The next morning, when I entered chapel, I heard these words interiorly:

Every time you enter the chapel, immediately recite the prayer which I taught you yesterday.' When I had said the prayer, in my soul I heard these words: 'This prayer will serve to appease My wrath . . ."

Sr. Lucia also had a vision of both a destroying angel ready to inflict God's punishment on the earth, and, years later, of the Holy Trinity. In her account of the apparition of Our Lady at Fatima on July 13, 1917, the message of which was part of the Third Secret, Lucia writes:

"After the two parts which I have already explained, at the left of Our Lady and a little above, we saw an Angel with a flaming sword in his left hand; flashing, it gave out flames that looked as though they would set the world on fire; but they died out in contact with the splendour that Our Lady radiated towards him from her right hand: pointing to the earth with his right hand, the Angel cried out in a loud voice: 'Penance, Penance, Penance!'"

On the 13th day of June in the year 1929, Sr. Lucia received this vision of the Holy Trinity as she was making a Holy Hour:

"Suddenly the whole chapel was illumined by a supernatural light, and above the altar appeared a cross of light, reaching to the ceiling. In a brighter light on the upper part of the cross, could be seen the face of a man and his body as far as the waist, upon his breast was a dove also of light and nailed to the cross was the body of another man. A little below the waist, I could see a chalice and a large host suspended in the air, on to which drops of blood were falling from the face of Jesus Crucified and from the wound in His side. These drops ran down on to the host and fell into the chalice. Beneath the right arm of the cross was Our Lady and in her hand was her Immaculate Heart. (It was Our Lady of Fatima, with her Immaculate Heart in her left hand, without sword or roses, but with a crown of thorns and flames). Under the left arm of the cross, large letters, as if of crystal clear water which ran down upon the altar, formed these words: ‘Grace and Mercy.’ I understood that it was the Mystery of the Most Holy Trinity which was shown to me, and I received lights about this mystery which I am not permitted to reveal . . ."

During this vision of the Holy Trinity, Our Lady proceeded to make her request, as foretold in 1917, for the consecration of Russia in order to prevent the calamities that were ready to sweep over the world. In the vision recounted above, Sr. Lucia beheld both blood and water emanating from Christ, similar imagery to the Divine Mercy vision that was later revealed to St. Faustina. Was the light of this mystery, which Sr. Lucia was not permitted to reveal, the mystery of the Divine Mercy which was soon to be given to St. Faustina?

Sr. Lucia and St. Faustina, who were contemporaries, were each given a mission to spread the same message, though different in aspect. While Our Lady of Fatima gave Sr. Lucia a warning of divine judgment and the need for penance, Our Lord came to St. Faustina to encourage souls to implore his mercy as a final recourse to be saved from this impending judgment. Sr. Lucia made known that the message of Fatima, namely, the Third Secret, was connected to the frightful global judgments found in the Book of Revelation. Our Lord, in light of these future punishments for mankind's sin, said to St. Faustina, "Before the Day of Justice, I am sending the Day of Mercy."

The prayers taught interiorly to the two nuns were also similar. The prayer the Angel of Peace taught to the three children of Fatima prior to Our Lady's appearances:

"Most Holy Trinity, Father, Son, and Holy Spirit, I adore You profoundly, and I offer You the most precious Body, Blood, Soul, and Divinity of Jesus Christ, present in all the tabernacles of the world, in reparation for the outrages, sacrileges, and indifference with which He Himself is offended. And, through the infinite merits of His most Sacred Heart, and of the Immaculate Heart of Mary, I beg of You for the conversion of poor sinners."

And the Divine Mercy prayer given to St. Faustina:

"Eternal Father, I offer You the Body and Blood, Soul and Divinity of Your dearly Beloved Son, Our Lord Jesus Christ, in atonement for our sins and those of the whole world."

Both nuns would also pray for God's mercy on the world while standing with arms extended out to their sides, in the same manner as Our Lord suffered on the cross. They also both prayed earnestly for the spiritual conversion of their home countries; Lucia for Portugal, and Faustina for Poland.

May we let the example of Sr. Lucia and St. Faustina be a call to respond to the urgent need for prayer and penance during the evil times in which we are now living, namely for the temporal protection of our countries and the eternal salvation of souls.

Do you want to learn more about the apparitions of Our Lady at Fatima? Subscribe to our 30-day content series at GoodCatholic.com. 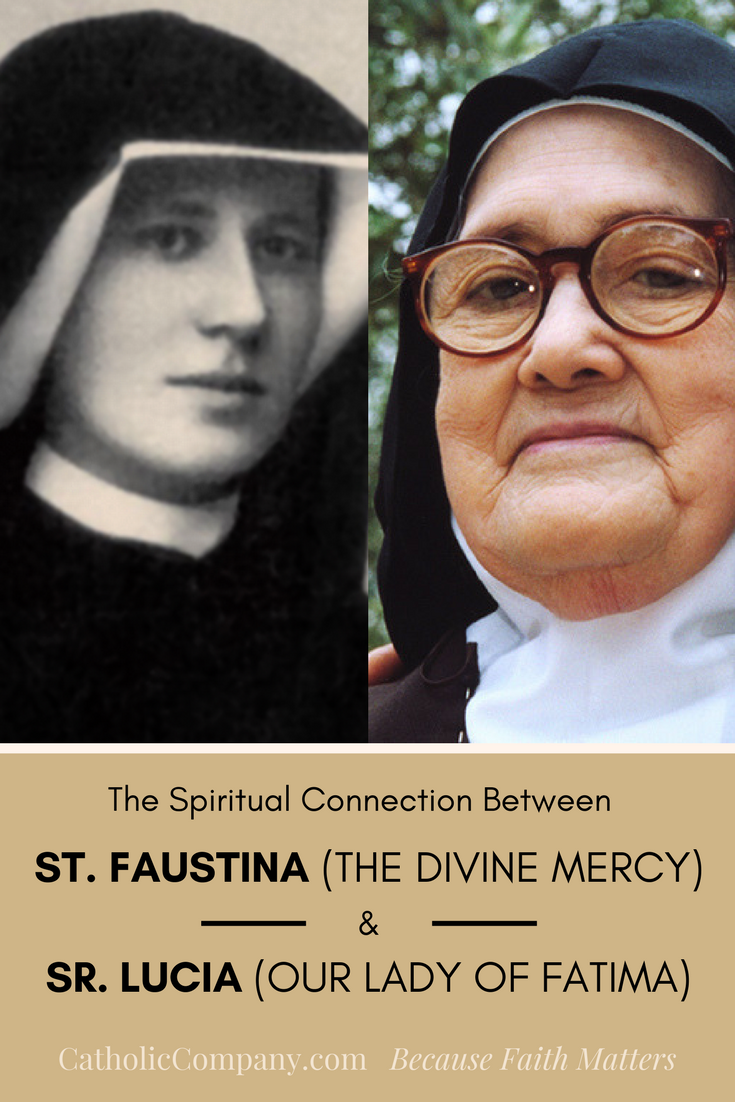