St. Francis Xavier is one of our most exciting and adventurous Catholic saints. He devoted his life to missionary work in largely unexplored places of the world. Historians compare his influence to that of St. Paul, in the countries and islands of the East, including India, Malaysia, Japan, Indonesia, Sri Lanka, and China. He was shipwrecked off the coast of Africa, spent perilous years on the sea, and risked life and limb to win souls for Christ with his gentleness, joy, and missionary zeal. He brought the Faith to children, fishermen, farmers, and kings.

Francis was born in Spain, only a few miles from St. Ignatius of Loyola. At the University of Paris, he became the lifelong friend of Ignatius and the co-founder of the Jesuits. Both men hailed from noble families, their legacies assuring them status, wealth, and comfort—but they were very different men.

Ignatius was already deeply devoted to the Lord and seeking to be His holy pilgrim, already serving God and souls. Francis Xavier was on a path to great academic success as a lecturer at the University. But he did not think he shared Ignatius' calling to become God’s instrument—let alone His holy priest.

Francis came gradually to a life of prayer, discipline, and sacrifice through the gentle prompting of his friend Ignatius.

Four years later, they took vows with two other men to begin the Company (Society) of Jesus. Calling themselves “Friends in the Lord,” they drew others to their spirituality.

Formed by the book The Spiritual Exercises, written by Ignatius, Francis Xavier took the vows of poverty, chastity and obedience. Leaving European cities and noble lifestyle behind, Francis said he would “go where the need was greatest.” 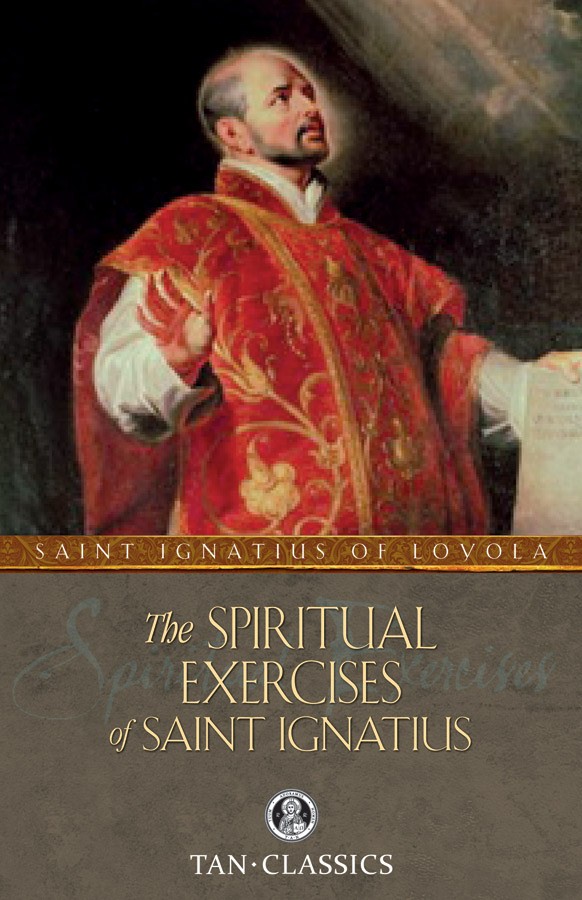 “In Thee, Oh, Lord, I have put my hope. Let me never be confounded.” —St. Francis Xavier

In 1530 the King of Portugal asked the Pope to send two Jesuits to India, to convert native Indians in the Portuguese colony of Goa. Hours prior to the journey, one of the two priests became ill and unable to travel. In this critical moment, Francis Xavier surrendered to God, seizing his legacy!

He worked among the Christian communities converted by the Apostle Thomas, and the pearl fishermen at the southern tip of India. He learned their languages and translated prayers, songs, and the Creed. He walked the land ringing a bell, singing and speaking in the language of those whom he served. Francis attracted both children and adults with songs that taught the faith in their own language. Fishermen sang his songs to one another and brought them home to their families. Francis won souls with his love for God each passing day. 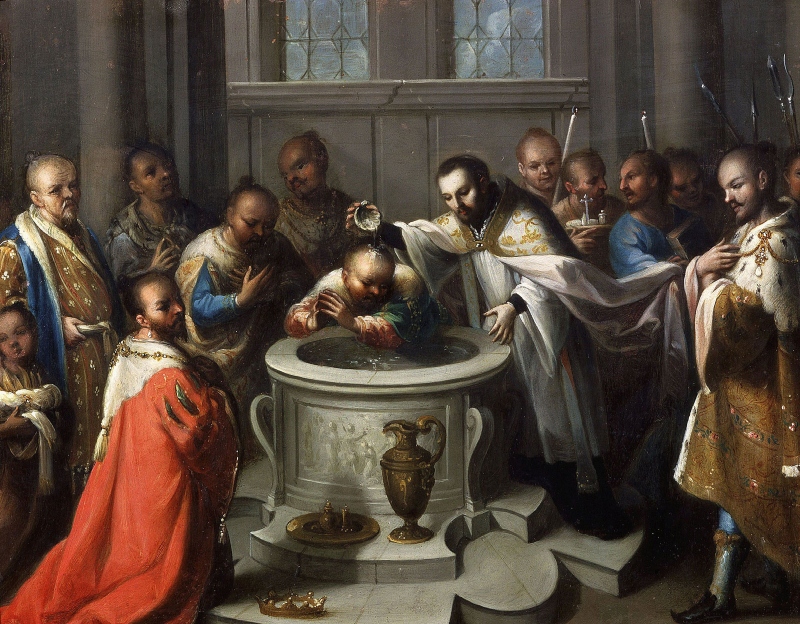 “I ask God our Lord to help us to know and experience his holy will, and once we have experienced it, give great strength and much grace to fulfill it with charity in this life.” —St. Francis Xavier

Francis spent seven years in India, traveling, teaching, preaching, comforting, begging, and spiritually supporting the people there. Then he sailed to Malaysia and continued East to Japan, Indonesia, Sri Lanka and other islands of the East. He was moved by the spirit of the people, and found they were ready to receive the good news.

He grew the Church in the East by vast numbers of faithful, but it was a difficult life.

Francis loved the people tirelessly despite trials and opposition in many forms, from local governments to the Muslims. In 1552, he set sail for China to win more souls for Christ and attempt to negotiate the freeing of Portuguese prisoners there.

“To fare well in this life we must be pilgrims, ready to go wherever we can serve God our Lord all the more.” —St. Francis Xavier

China was closed to foreigners, and his long awaited audience with the imperial court fell through. In August of 1552, Francis’ ship deserted him without warning, leaving him on an island within sight of mainland China. It was winter, and Francis had no support or provisions, except a tent through which the north winds beat mercilessly upon him, and two boys who assisted him.

As he lay on the cold ground, staring across the horizon at mainland China, he thought this land was his next pilgrimage, but the Lord had bigger plans for St. Francis Xavier. He contracted a terrible fever from which he died on December 3, 1552. He was not going to China. He was going to his Lord and Savior. 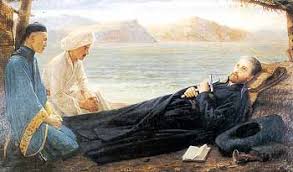 “Give me souls!”  —St. Francis Xavier


St. Francis Xavier baptized over 30,000 souls for Christ and won hearts for the Kingdom of God with a pilgrim spirit said to rival that of St. Paul. Despite great difficulties, language barriers, lack of funds and provisions, lack of cooperation, and dangerous resistance, he left the mark of his apostolic zeal on the people of the East. He was not only the co-founder of the Jesuit Order but he was a famed and ardent missionary who is now known as the Heavenly Patron of All Catholic Missions.

As faithful Christians, we are all called to be evangelizers, prophets, and missionaries in our own time. We are called to know God, and to make Him known, by building our own intimate relationship with Him, then bring Him to others. In our modern world, there is a great need for conversion. We are deeply wounded people facing complicated problems. The world is in need of conversion through God’s love and mercy, the good news, and our own apostolic zeal. May we all seek to become zealous witnesses to His love, just like St. Francis Xavier.

St. Francis Xavier, pray for us!

A Prayer for the Conversion of Unbelievers by St. Francis Xavier

Eternal God, creator of all things, remember that You alone created the souls of unbelievers, which You have made according to Your Image and Likeness.

Behold, O Lord, how to Your dishonour, many of them are falling into Hell. Remember, O Lord, Your Son Jesus Christ, who so generously shed His Blood and suffered for them.

Do not permit that Your Son, Our Lord, remain unknown by unbelievers, but with the help of Your Saints and the Church, the Bride of Your Son, remember Your mercy, forget their idolatry and infidelity, and make them know Him, who You have sent; Jesus Christ, Your Son, Our Lord, who is our salvation, our life, and our resurrection, through Whom we have been saved and redeemed, and to Whom is due glory forever. 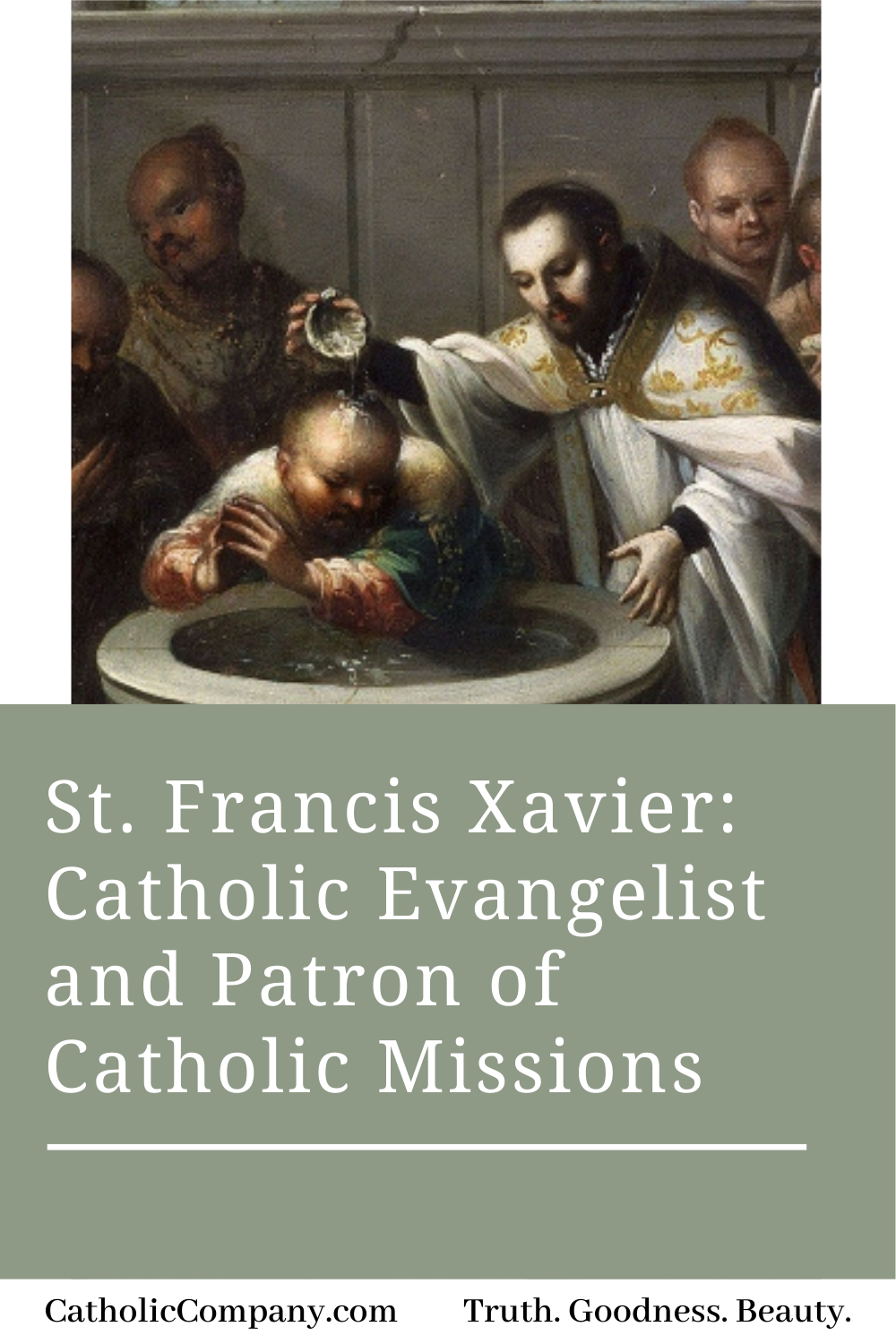