St. Ignatius of Antioch (d. c. 98-117) was a Syrian who became a disciple of St. John the Apostle after converting to Christianity from paganism. He rose to prominence in the Church and succeeded St. Peter the Apostle as the third bishop of Antioch, being ordained by St. Peter himself. He is the first to have used the term "Catholic" Church, meaning "Universal."

He was an important Church Father of the Apostolic age, an ideal pastor, and a fearless soldier of Christ. He was tireless in supporting his flock against dangerous heresies and the terrors of the persecutions of the Roman Emperors.

When Ignatius violated the imperial edict to worship false gods, he was arrested and led before the Emperor Trajan. After boldly proclaiming the truth of Jesus Christ (which you will read below), he was taken from Syria to Italy and condemned to be publicly devoured by wild beasts at the Colosseum in Rome.

Along the journey to his death he wrote many letters to his fellow Christians, encouraging them with his apostolic zeal and exhorting them to obey their bishops. He also pleaded that none try to obtain his release, as he was eager to lay down his life for Jesus, saying,

“The only thing I ask of you is to allow me to offer the libation of my blood to God. I am the wheat of the Lord; may I be ground by the teeth of the beasts to become the immaculate bread of Christ.”

He was devoured by lions for sport in Rome in the early second century. 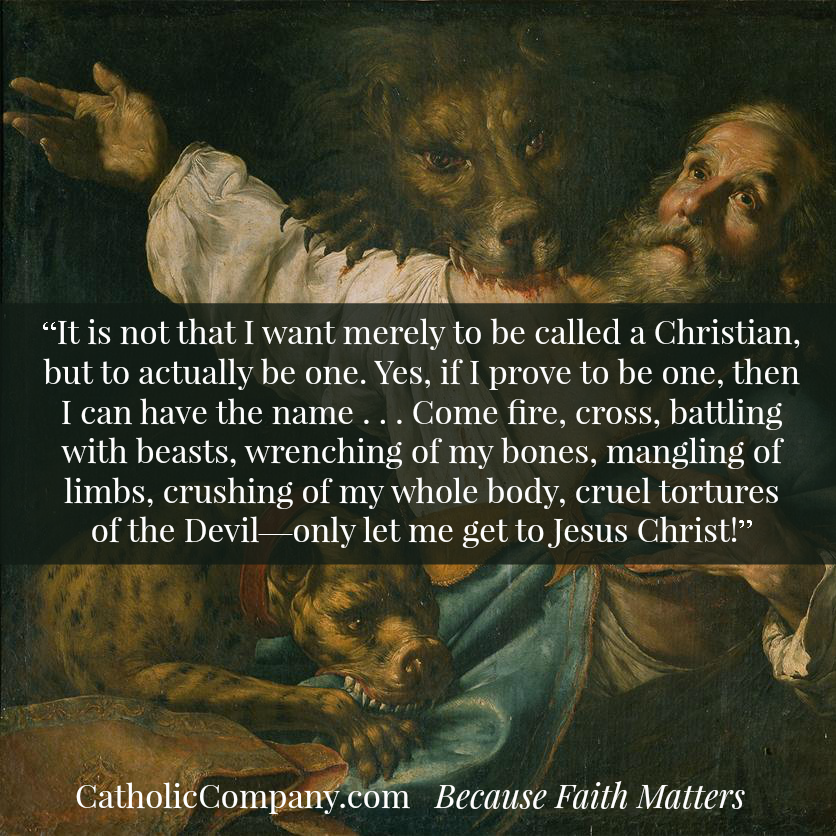 For Trajan, in the ninth year of his reign, being lifted up [with pride], after the victory he had gained over the Scythians and Dacians, and many other nations, and thinking that the religious body of the Christians were yet wanting to complete the subjugation of all things to himself, and [thereupon] threatening them with persecution unless they should agree to worship dæmons, as did all other nations, thus compelled all who were living godly lives either to sacrifice [to idols] or die. Wherefore the noble soldier of Christ [Ignatius], being in fear for the Church of the Antiochians, was, in accordance with his own desire, brought before Trajan, who was at that time staying at Antioch, but was in haste [to set forth] against Armenia and the Parthians.

Emperor Trajan: "Who are you, wicked wretch, who settest yourself to transgress our commands, and persuadest others to do the same, so that they should miserably perish?"

St. Ignatius of Antioch: "No one ought to call Theophorus wicked; for all evil spirits have departed from the servants of God. But if, because I am an enemy to these [spirits], you call me wicked in respect to them, I quite agree with you; for inasmuch as I have Christ the King of heaven [within me], I destroy all the devices of these [evil spirits]."

Trajan: "And who is Theophorus?"

Ignatius: "He who has Christ within his breast."

Trajan: "Do we not then seem to you to have the gods in our mind, whose assistance we enjoy in fighting against our enemies?"

Ignatius: "You are in error when you call the dæmons of the nations gods. For there is but one God, who made heaven, and earth, and the sea, and all that are in them; and one Jesus Christ, the only-begotten Son of God, whose kingdom may I enjoy."

Trajan: "Do you mean Him who was crucified under Pontius Pilate?"

Ignatius: "I mean Him who crucified my sin, with him who was the inventor of it, and who has condemned [and cast down] all the deceit and malice of the devil under the feet of those who carry Him in their heart."

Trajan: "Do you then carry within you Him that was crucified?"

Trajan: "We command that Ignatius, who affirms that he carries about within him Him that was crucified, be bound by soldiers, and carried to the great [city] Rome, there to be devoured by the beasts, for the gratification of the people."

Ignatius: "I thank you, O Lord, that You have vouchsafed to honour me with a perfect love towards You, and have made me to be bound with iron chains, like Your Apostle Paul."

Having spoken thus, he then, with delight, clasped the chains about him; and when he had first prayed for the Church, and commended it with tears to the Lord, he was hurried away by the savage cruelty of the soldiers, like a distinguished ram the leader of a goodly flock, that he might be carried to Rome, there to furnish food to the bloodthirsty beasts.

This incredible account of St. Ignatius' strength under trial brings to mind the promise of Christ to his Apostles in Mark 13:9-13:

“As for yourselves, beware; for they will hand you over to councils; and you will be beaten in synagogues; and you will stand before governors and kings because of me, as a testimony to them. 10 And the good news must first be proclaimed to all nations. 11 When they bring you to trial and hand you over, do not worry beforehand about what you are to say; but say whatever is given you at that time, for it is not you who speak, but the Holy Spirit. 12 Brother will betray brother to death, and a father his child, and children will rise against parents and have them put to death; 13 and you will be hated by all because of my name. But the one who endures to the end will be saved.

St. Ignatius kept the courage of his fellow Christians during the infamous and brutal persecutions of the Roman emperors. He eagerly awaited his martyrdom for the sake of Christ, setting an example for all who would die for the Faith. St. Ignatius, pray for us! 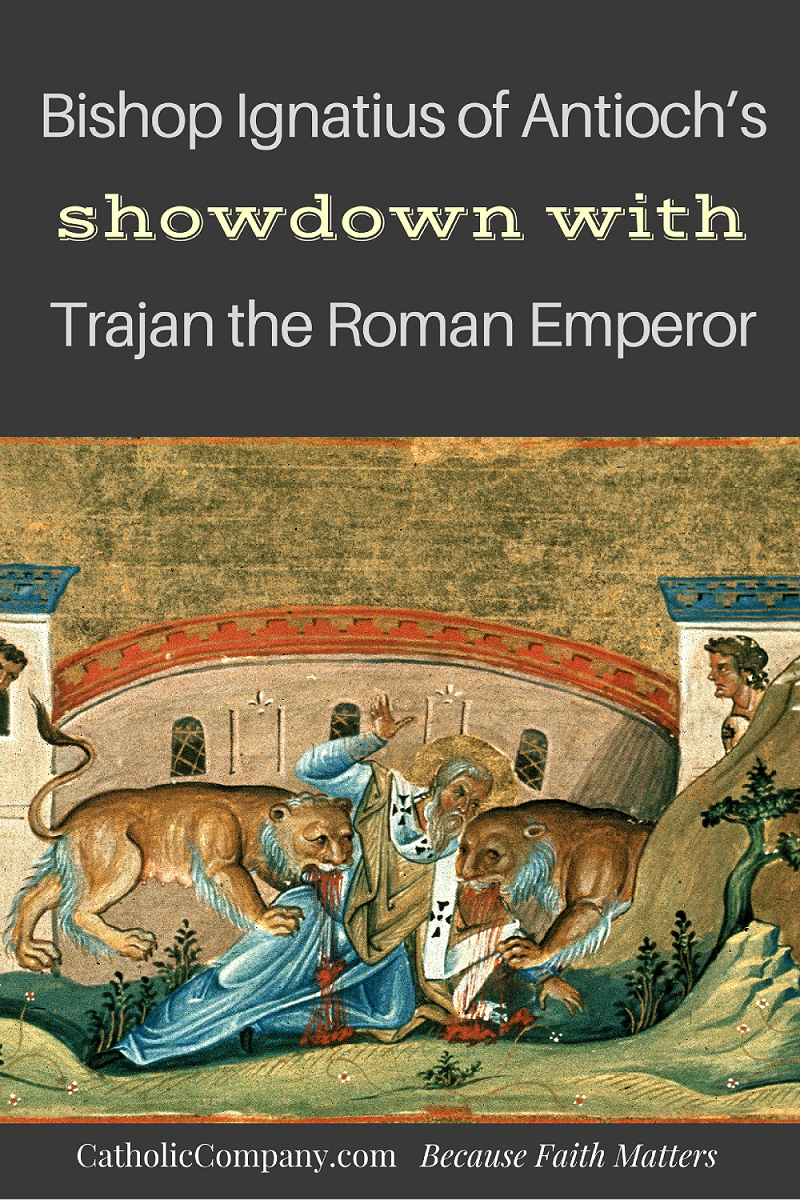