St. John the Baptist was the last and greatest of the Old Testament prophets sent to "prepare the way of the Lord."  Jesus called him the greatest of all the prophets because of his direct involvement in the earthly life and ministry of the Messiah.

In St. John the Baptist, the Old Testament meets the New Testament: Before his time, the Law and the Prophets were proclaimed; from his life and to the end of time, the Gospel of Christ is proclaimed.

We remember Saint John the Baptist each time we pray the Holy Rosary, our prayerful meditations on the life of Christ.  In the Second Joyful Mystery, the Visitation, the Virgin Mary went in haste to visit her cousin Elizabeth following the Annunciation.  John the Baptist leaped in the womb of his mother, Saint Elizabeth, as soon as they were greeted by the Virgin Mary, who then was pregnant with the Child Jesus. We also remember St. John the Baptist in the First Luminous Mystery, as he was the one who baptized Jesus in Jordan river.

St. John the Baptist was from the womb until his death a witness to Jesus Christ as the Messiah and Son of God.  In fact, the Church teaches that St. John the Baptist was born without Original Sin because of Jesus; at the greeting of the pregnant Mother of God to his mother Elizabeth, he was filled with the Holy Spirit (i.e. baptized in the womb) which caused him to be born without Original Sin.

As the divinely appointed "Precursor" of Jesus Christ, his life was closely intertwined with the earthly life of Jesus. On this feast day of St. John the Baptist we can reflect on how much like Jesus he truly was. 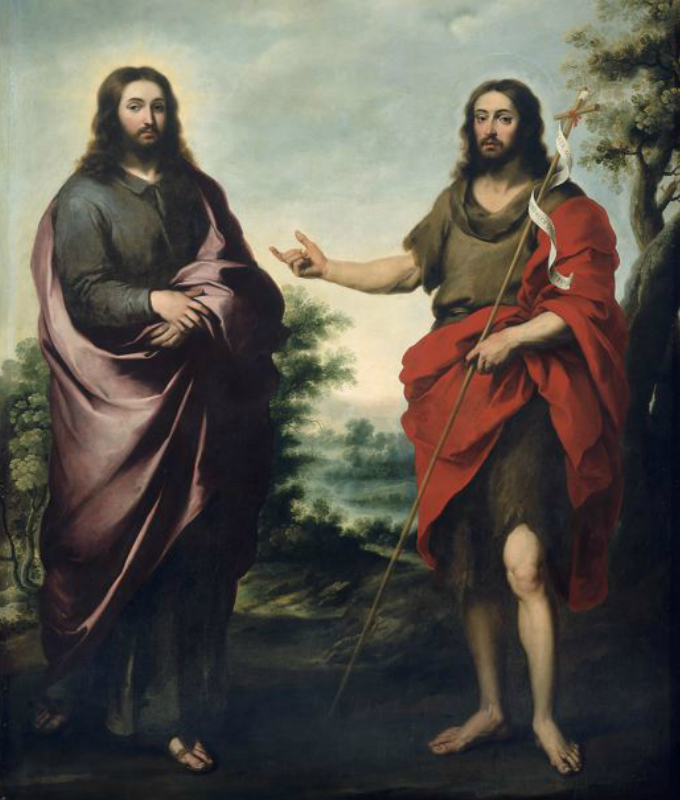 10 Things St. John the Baptist Has in Common with Jesus

1)   They were both the same age (born six months apart).

2)   They were both from the same extended family (Mary and Elizabeth were cousins).

3)   They both had righteous, godly parents (Zechariah and Elizabeth; Joseph and Mary)

5)   Their births were announced to their parents by the Archangel Gabriel.

6)   Their names were divinely given by God.

7)   They began their public ministry near the age of 30.

9)   They both preached of a coming Messianic kingdom and a baptism of repentance.

10) They were both righteous men who testified to God's Truth, and were condemned to death by Roman rulers.

St. John the Baptist was truly the forerunner of the Messiah, always a step ahead of Jesus' ministry.  John was born first, began his ministry first, and died a martyr's death first.   And it was clear that Jesus loved him, being deeply grieved when he heard the news of his beheading at the hand King Herod.

Jesus praised John the Baptist highly by saying, "Truly I tell you, among those born of women no one has arisen greater than John the Baptist."  Because of this he was one of the most highly venerated saints in the ancient and medieval Church, and he has two feast days: his Nativity on June 24th and his Passion on August 29th.

Here is one more thing that St. John the Baptist and Jesus had in common:  John died because of his defense of the sanctity and integrity of marriage, and marriage was the scene of Jesus' first miracle and the launching of his public ministry, the wedding feast at Cana, thus sanctifying marriage and confirming it as a Sacrament.

There are also many ways that St. John the Baptist and the circumstances surrounding his birth and life serve as a contrast to that of Christ. From a sermon of St. Augustine from the Liturgy of the Hours on this feast day:

"The news of John’s birth was met with incredulity, and his father was struck dumb. Christ’s birth was believed, and he was conceived through faith."

"John was a voice that lasted only for a time; Christ, the Word in the beginning, is eternal."

As St. Augustine says, "This day cannot be passed by. And even if my explanation does not match the dignity of the feast, you may still meditate on it with great depth and profit." Hopefully this post gives you some food for thought on the wonderful mysteries surrounding the birth, life, and death of this great Christ-like saint.

From a homily by St. Bede the Venerable

Precursor of Christ in birth and death

As forerunner of our Lord’s birth, preaching and death, the blessed John showed in his struggle a goodness worthy of the sight of heaven. In the words of Scripture: Though in the sight of men he suffered torments, his hope is full of immortality. We justly commemorate the day of his birth with a joyful celebration, a day which he himself made festive for us through his suffering and which he adorned with the crimson splendour of his own blood. We do rightly revere his memory with joyful hearts, for he stamped with the seal of martyrdom the testimony which he delivered on behalf of our Lord.

There is no doubt that blessed John suffered imprisonment and chains as a witness to our Redeemer, whose forerunner he was, and gave his life for him. His persecutor had demanded not that he should deny Christ, but only that he should keep silent about the truth. Nevertheless, he died for Christ. Does Christ not say: I am the truth?

Such was the quality and strength of the man who accepted the end of this present life by shedding his blood after the long imprisonment. He preached the freedom of heavenly peace, yet was thrown into irons by ungodly men; he was locked away in the darkness of prison, though he came bearing witness to the Light of life and deserved to be called a bright and shining lamp by that Light itself, which is Christ. John was baptized in his own blood, though he had been privileged to baptize the Redeemer of the world, to hear the voice of the Father above him, and to see the grace of the Holy Spirit descending upon him. But to endure temporal agonies for the sake of the truth was not a heavy burden for such men as John; rather it was easily borne and even desirable, for he knew eternal joy would be his reward.

Since death was ever near at hand through the inescapable necessity of nature, such men considered it a blessing to embrace it and thus gain the reward of eternal life by acknowledging Christ’s name. Hence the apostle Paul rightly says: You have been granted the privilege not only to believe in Christ but also to suffer for his sake. He tells us why it is Christ’s gift that his chosen ones should suffer for him: The sufferings of this present time are not worthy to be compared with the glory that is to be revealed in us.

Prayer to St. John the Baptist

O God, You raised up St. John the Baptist to prepare a perfect people for Christ.  Fill Your people with the joy of possessing His grace, and direct the minds of all the faithful in the way of peace and salvation. Grant that as St. John was martyred for truth and justice, so we may energetically profess our Faith in You, and lead others to the Way, the Truth, and Eternal Life.  Amen. 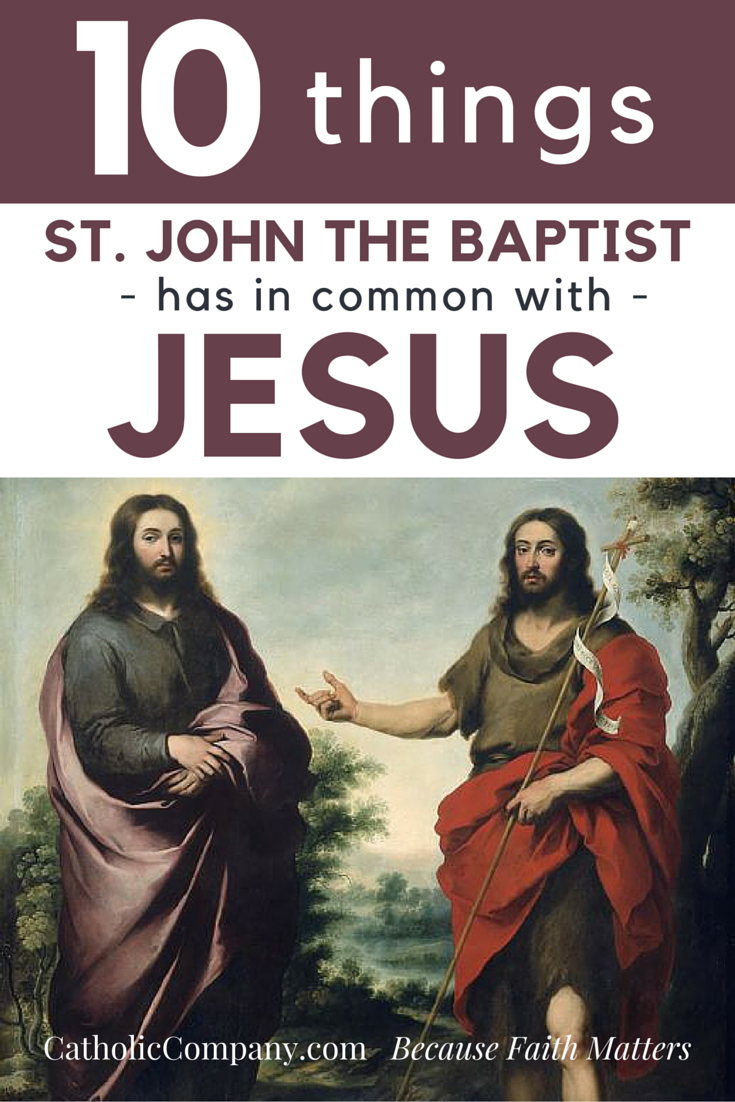 This article has been updated and was originally published in June 2012. © The Catholic Company