The October 13th, 2019 canonization of St. John Cardinal Newman, more commonly known as St. John Henry Newman, (and not to be confused with his elder St. John Neumann) was anticipated with great joy throughout our Church. The recognition of his sanctity is an important event: one that is cause for celebration among all Catholics—particularly the Catholic Church of England and Wales—and the Anglican Church, as well.

The story of St. John Henry Newman is a reminder that God draws His children to Himself in His own way, and in His own time. No two paths are the same. Often we find ourselves on a path we never expected, but if we seek the truth with purity of heart and intention, and stay the course, God will acknowledge and bless our efforts.

A Man With A Unique Mission

Born in 1801 in London, England, Newman traveled a unique path to Catholicism. He began his life as an Evangelical, studied at Oxford, and then felt a calling to become an Anglican priest. He was ordained to his “first” priesthood in 1825. While he was a faithful and holy Anglican priest, he was simultaneously drawn to many of the foundational beliefs, liturgy, and ceremonies of the Catholic Church. He felt prompted to study the early Church Fathers and all original sources of Christianity, which were fundamentally Catholic. He questioned some dogmas such as papal infallibility and wrestled to reconcile all of this to what he knew and lived in the Anglican priesthood. This interior conflict began a quest for the truth that would one day lead him to Catholicism.

With other like-minded Anglican priests of his time, John Henry Newman began what is now known as “The Oxford Movement.” This movement emphasized the importance of the beliefs and traditions of the Church Fathers and decried what Newman called “subjective truth.”

Sometime around 1833 the movement reached a critical momentum. Liturgical reform among these priests breathed new life into Anglican worship. Through it, the Church of England began to experience a series of changes. Religious orders were formed in the Anglican Church. The Eucharist gradually became more central to the liturgy. Vestments were adopted, as in Catholicism. The Oxford movement acknowledged the beauty of symbolism and ritual in worship. Its reformers introduced Catholic elements into their services. This Anglo-Catholicism led to many disputes and conflicts among Anglican churches. Some of these even resulted in court cases. 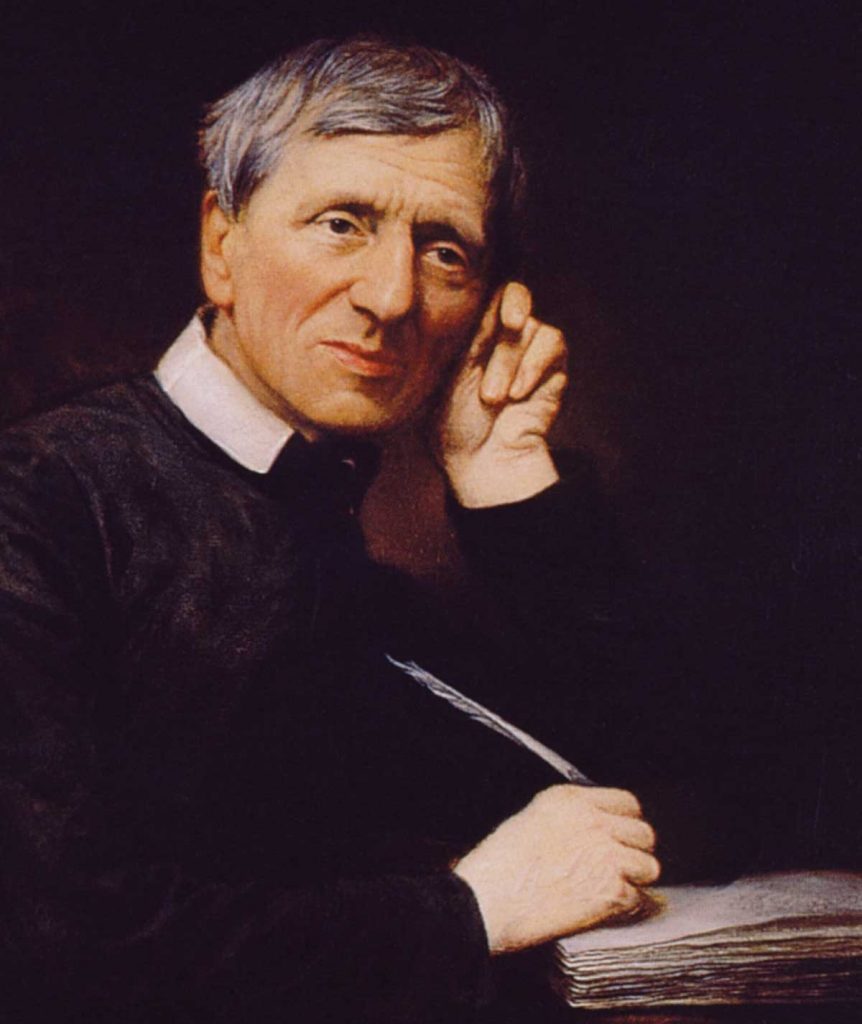 By this time, John Henry Newman was not only a holy, Anglican parish priest; he was also a prolific and accomplished writer, orator, scholar, poet, and musician. He continued seeking. He prayed, studied, and used his gift of intellect to discern whether the truths of Catholicism held up against the radically anti-Catholic English rhetoric of his time. He discovered that there was a great deal of distortion in England regarding Catholicism. Much of what was said about it was not true, nor kept in proper context. Such misrepresentation fed historical negativity and closed-mindedness towards the Catholic Faith among the English.

A Lifetime of Conversion

Newman wrestled with some concepts (learned in his earlier days) which opposed Catholic teaching and theology, so he continued to seek the truth through research, prayer, and discussion with his contemporaries. He eventually came to the conclusion that the Catholic Church was the one founded by Christ.

In 1845, he converted to Catholicsm. He paid a great personal price for his convictions. He was maligned, publicly rebuked, shunned, and abandoned by family members, friends, and many within his Oxford circle. His own sister never spoke to him again after his conversion. But the Catholic Church quickly recognized his gifts and placed them at the service of God and the faithful. He was ordained a Catholic priest in 1847 and made a cardinal in 1879, without ever having been made a bishop.

The aspect of Catholicism that moved and astonished him the most was the reservation of the Blessed Sacrament in the tabernacle. He was simply taken aback by how much the Real Presence affected him once he understood it. He wrote about his surprise to a friend (who later converted to Catholicism):

“I did not know, or did not observe, the tabernacle Lamp – but now after tasting of the awful delight of worshipping God in His Temple, how unspeakably cold is the idea of a Temple without that Divine Presence! One is tempted to say what is the meaning, what is the use of it?...

I am writing next room to the Chapel – It is such an incomprehensible blessing to have Christ in bodily presence in one’s house, within one’s walls, as swallows up all other privileges … To know that He is close by – to be able again and again through the day to go in to Him …

“It is really most wonderful to see this Divine Presence looking out almost into the open streets from the various Churches … I never knew what worship was, as an objective fact, till I entered the Catholic Church.”

When he became a cardinal, Newman chose as his motto “Cor ad cor loquitur,” that is, “Heart speaks to heart.” He knew that it was not possible to convince minds without first moving hearts. A thing can be understood at a logical and intellectual level, and yet not be fully accessed or made meaningful, until both heart and mind are moved. This was his mission, and it became his motto.

One of the most well-known and highly-placed converts of the 19th century, he had particular gifts of sensitivity and scholarship. This, in combination with his theological depth, allowed him to make truth accessible through his beautiful writing. He wrote thirty-three books and thousands of letters in his lifetime, revealing, among other things, his theological understanding, his deep faith, his gifts in building and maintaining relationships, and his great compassion.

Despite the incredible demands of his position, he lived a life committed to the poor, the bereaved, the imprisoned and marginalized, the sick and the dying. He was known as a wonderful and inspiring preacher. Many of his written prayers were circulated among the faithful and brought them closer to God.

Three years after his death, the first Newman Club was founded at the University of Pennsylvania. Newman had believed and stated in his writings that Catholic students at secular universities needed societies to support their faith while in college. He felt strongly that students attending secular colleges needed a ministry devoted especially to them. These Newman Centers—as they are now known—promote Catholic thought, fraternity, ministry, and faith life. They provide the Holy Mass and the sacraments for students, making possible the formation of Catholic young adults in secular universities.

Dear Jesus
Help me to spread Your fragrance everywhere I go.
Flood my soul with Your spirit and life.
Penetrate and possess my whole being so utterly,
that my life may only be a radiance of Yours.
Shine through me, and be so in me that every soul I come in
contact with may feel Your presence in my soul.
Let them look up and see no longer me but only Jesus!
Stay with me and then I shall begin to shine as You shine,
so to shine as to be a light to others; The light, O Jesus will be
all from You; none of it will be mine;
It will be you shining on others through me.

John Henry Newman brought his experience in the Anglican priesthood into his Catholicism, which was a unique benefit. Because of his confidence in the truth, he was able to resist the prevailing English attitudes which were hostile toward Catholicism. He was instrumental in helping England and the Anglican Church “recover” some of their more Catholic traditions. He was the first bridge between these two churches. Unity has since progressed amicably with some of the more traditional “Anglo-Catholic” churches, which have fully united with the Catholic faith.

Newman was one of the most gifted and eloquent writers and preachers the Church has ever known. He continues to inspire people today with his beautiful prayers, books, and letters. His legacy also includes the important mission of carrying the gospel forward for today’s Catholic youth in over 2,000 Newman Centers. He remains a central figure in his contributions to both Catholic and Anglican theology, prayerful writing and inspiration, education, and many areas of the Christian faith and life. 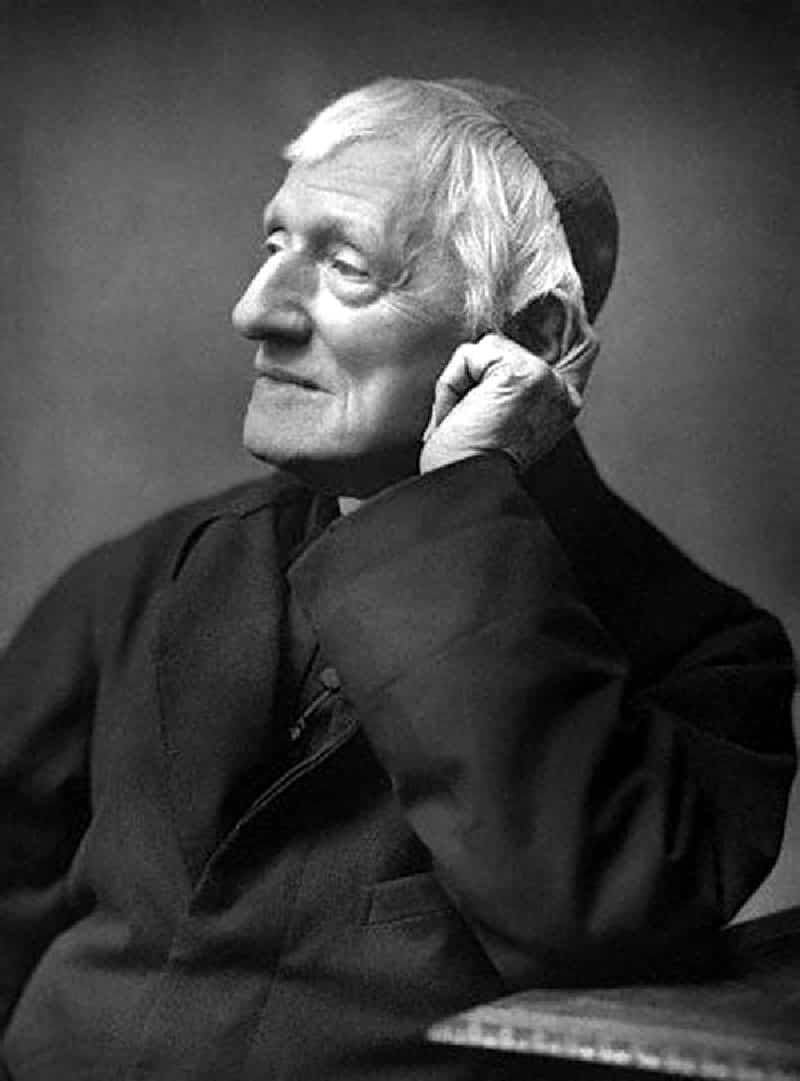 St. John Henry Newman is evidence that there are many paths on the journey to God, and that our lives often take us to Him in ways we did not expect. He modeled holiness during a long and complex spiritual pilgrimage. He sought the truth as his motto, “heart speaks to heart,” attested. Over many years, the heart of Catholicism attracted this special saint, yet his life was formed in both communions. He influenced each in his profound love of God and man and his many contributions to Christianity and Catholicism. While he did this, he lived out the example that truth and the search for it are critical in the life of every Christian, no matter the consequences.

As a force for unity and conviction, Newman stands as an example to us all. In this time of relativism, in which the teachings of the Church are being ignored or diluted in our society, he is a beacon of integrity, reminding us to stand firm in Christ through His Church.

In the life of this holy saint we see that a passion for the truth and a willingness to sacrifice for it —at any cost—will bear great fruit for us and for others, through God’s grace.

The Mission of My Life by St. John Henry Newman

God has created me to do Him some definite service. He has committed some work to me which He has not committed to another. I have my mission. I may never know it in this life, but I shall be told it in the next. I am a link in a chain, a bond of connection between persons. He has not created me for naught. I shall do good; I shall do His work. I shall be an angel of peace, a preacher of truth in my own place, while not intending it if I do but keep His commandments. Therefore, I will trust Him, whatever I am, I can never be thrown away. If I am in sickness, my sickness may serve Him, in perplexity, my perplexity may serve Him. If I am in sorrow, my sorrow may serve Him. He does nothing in vain. He knows what He is about. He may take away my friends. He may throw me among strangers. He may make me feel desolate, make my spirits sink, hide my future from me. Still, He knows what He is about.

Prayer for a Happy Death by St. John Henry Newman

Oh, my Lord and Savior, support me in that hour in the strong arms of Your Sacraments, and by the fresh fragrance of Your consolations. Let the absolving words be said over me, and the holy oil sign and seal me, and Your own Body be my food, and Your Blood my sprinkling; and let my sweet Mother, Mary, breathe on me, and my Angel whisper peace to me, and my glorious Saints smile upon me; that in them all, and through them all, I may receive the gift of perseverance, and die, as I desire to live, in Your faith, in Your Church, in Your service, and in Your love. Amen.

What strikes you most about St. John Henry Newman's conversion? Can you or someone you know relate to his experience? Share in the comments below!