*Must type in BF16 at checkout to receive 16% off orders subtotaling over $35. Free standard shipping (Contiguous U.S. only) automatically applied at checkout for subtotals of $75 or more after discount has been applied. Cannot be used with other coupon codes or on orders already placed. Excludes gift cards and Good Catholic digital subscriptions. Other restrictions may apply. Expires 11:59 p.m. PT on 11/27/22. Due to COVID19 there may be delays with some mail carriers. Please see shipping page for more information. Only while supplies last.

With the apostolic letter Patris Corde, Pope Francis announced the Year of St. Joseph for 2021.

I was happy to hear of Pope Francis' invitation to the Universal Church to honor and draw closer to the earthly father of Christ. Having taken St. Joseph as my spiritual father many years ago, growing in relationship with him over time, and learning about his many virtues, I have found a model of the hidden interior life, an example of docility to God, and a beautiful image of spousal and fatherly love.

Much has been written about St. Joseph as the husband of Our Lady and the father of Jesus. His relationship to them was part of the great mystery of the Incarnation. To be sure, it was not a conventional relationship. It was a call for St. Joseph to give his fiat, his "yes" to God, just as Our Lady did. Through this gift of self, God's will for mankind was made manifest not only through Our Lady or the Christ, but through the person of Joseph.

We know so little about him from the Scriptures. Though he was entrusted with the care of the Messiah and the Blessed Mother, he never usurped their glory. He never speaks in Sacred Scripture. Rather, he remains silent, hidden in God, quietly obedient to His will. 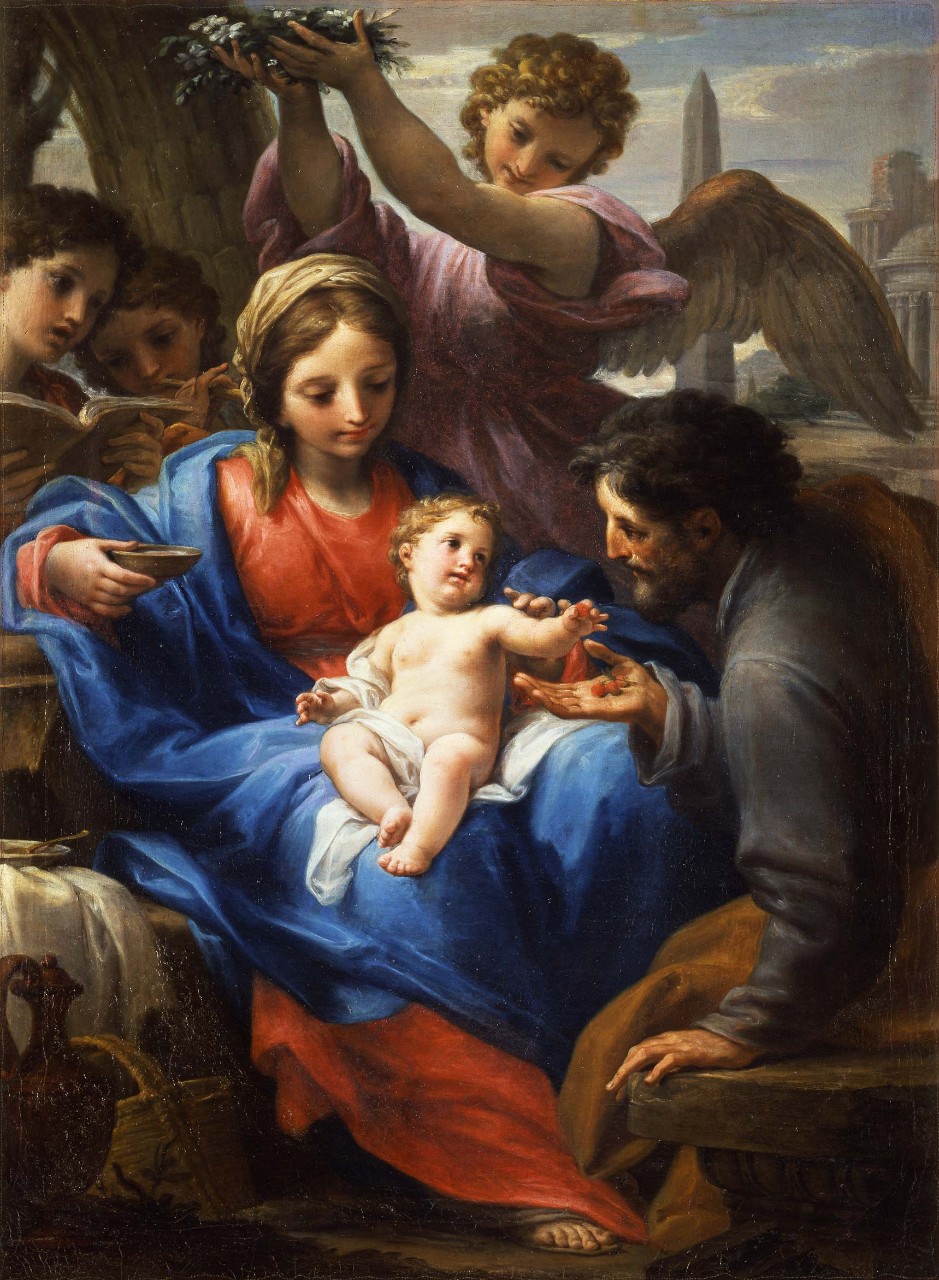 We know that Matthew refers to him as a "just man" in the Gospels (Matt. 1:19). That means—in the context of his time and culture—he was a man completely devoted to God, the Mosaic Law, and the covenant of his people.

While Mary was prepared by the Angel Gabriel in the Annunciation, St. Joseph recognized and acknowledged Mary's condition without heavenly assistance. Then the Angel of the Lord appeared to him later in a dream. Thinking about that, and what it must have been like for him until the Heavenly Messenger's revelation, I am in awe of his tenderness, mercy, and goodness in the face of what must have been a confusing agony.

He received the overwhelming mystery of Mary’s motherhood, and the accompanying miracle of the Incarnation in obedience and love, despite how confounding they seemed. Docile to the Divine Will, he cooperated with God's grace to bring salvation to mankind, legitimizing the Christ Child born into the world. 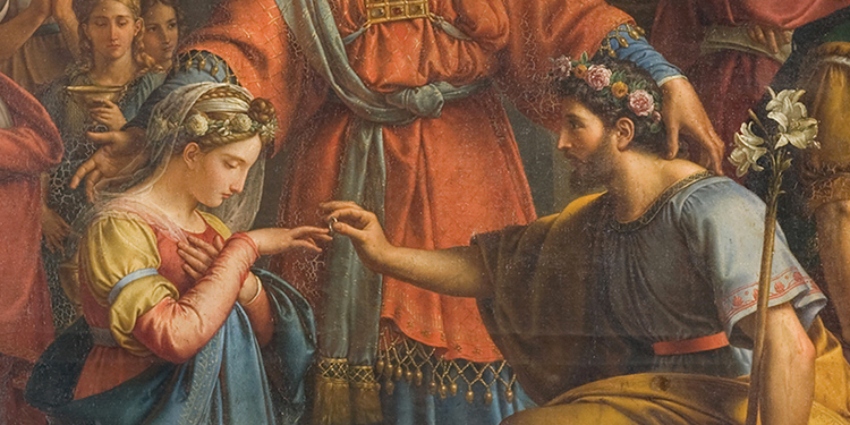 Joseph was a true spouse to Mary and a true father to Jesus. In Mary's pregnancy and Jesus' Incarnation, Joseph’s faith met Our Lady's, responding to the same mysterious calling. Within these mysteries, they oriented their entire lives together. The revelation that the holy couple lived simultaneously the charism of virginity and the gift of matrimony demonstrates just some of the profound graces bestowed upon Joseph in his married life.

The Church teaches that Christ dwells within, and with, the bride and groom in their marriage. Graces spring from this supernatural, fruitful, and tender love of Christ that binds a husband and wife. Christ dwelt with, and within, Joseph and Mary in the most concrete way possible. He was physically present within their family, their home, and their everyday lives.

The souls of husband and wife join to achieve greater union than their bodies. Authentic married love is caught up in divine love. It is in this sense, and through this bond, that Joseph was Mary’s true and sublime spouse. His love was definitive and so was his fidelity.

Yes, their relationship was virginal. It was with this holy purity that Joseph’s true marriage witnessed to, and represented, the fidelity of God to His covenant with mankind, and the fidelity of Christ to His Bride, the Church. It was in the context of these relationships that Joseph embraced his role as the spouse of Our Lady.

Their virginity within marriage was simply the complete integration of their persons into their elevated, holy love. 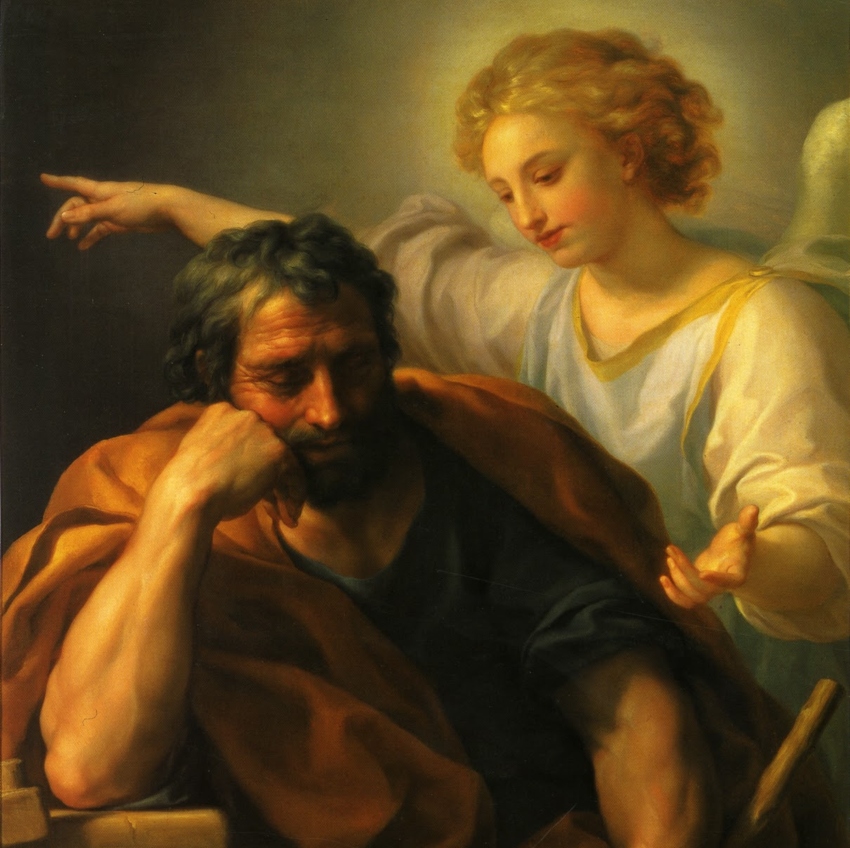 Joseph, Loving Protector of the Christ

Through matrimony, St. Joseph became the father of Jesus. In truth, it was more than just the “foster fatherhood” that we often hear referenced. God chose Joseph to protect and save His Son, so that one day the Son could save him, and all of us.

"Get up. Take the child and his mother and flee to Egypt. Remain there until I tell you."
—Matt 2:13

When the Angel appeared to him in a dream and told Joseph to take the child and His Mother to Egypt, because Herod sought to kill Jesus, he obeyed immediately.

Years later, after Herod's death, the Angel of the Lord appeared to St. Joseph again in a dream, with another directive:

He again obeyed promptly, but having heard that Herod's son was ruling Judea, he feared returning there and endangering the life of Jesus. The Lord did not allow him to remain fearful, and again he was warned in a dream to go to Galilee and make his home in Nazareth, so that what had been spoken through the prophets might be fulfilled (Matt 2:22-23).

I admire St. Joseph's complete and instantaneous obedience to God. He does not doubt or question. He immediately responds in poverty of spirit, enabling God's will—as spoken through the prophets—to be fulfilled.

Joseph was, of course, not the biological father of Jesus. Jesus was conceived by the power of the Holy Spirit; He is the Son of God. However, Joseph was not merely a "foster father." His true fatherhood is revealed in the Scriptures by Our Lady herself, in Luke 2:48, when she tells a young Jesus in the temple, “Your father and I have been looking for you with great anxiety.” Jesus recognized Joseph’s authority. He went home with his parents.

Of course there was the primary fatherhood of God, and Jesus recognized this too by replying to his Mother, “Did you not know I must be in my Father’s house?” Yet He respected and obeyed the authority of the father He had been given on earth with ardent love, just as he did His Heavenly Father. It was for this reason that He left the temple obediently, subjecting Himself to Joseph’s authority, when they found Him there teaching the elders and answering their questions.

In turn, the humble head of the Holy Family safeguarded and developed the humanity of Jesus by caring for, teaching, and protecting him in their hidden everyday life. He was the master of the house of Nazareth.

The growth of Jesus "in wisdom and statue, and in favor with God and man," (Luke 2:52) took place under the attentive eyes of St. Joseph as father and head of his family. He clothed, fed, supported, and cared for the daily needs of his son and his beloved wife. It was his role to teach Jesus the virtues of manhood and the Law of Moses, as well as to educate Him in a trade. From Joseph, Jesus learned, at a human level, much of what a man needed in order to grow in human wisdom and stature.

Joseph's duties were a great privilege and awesome responsibility. With astonishing faith in God, he conformed his life as a husband and father to the will of the Lord, renouncing whatever expectations he had had of his vocation. Because of this docility, the Word became flesh in secret, shrouded in an intimacy unlike any ever known to man.

Joseph concealed the Incarnation within the mystical bonds of his marriage, just as he consented to be concealed himself. Jesus was obscured, protected, and nurtured by Joseph's paternity until the time came for Him to begin His ministry, confront the devil, and defeat death forever in His Passion. No wonder St. Joseph is the Terror of Demons.

The role of St. Joseph in salvation history is glorious, but he did not set out in search of anything more than to meet God's will with his own as a husband and father. Though Our Lady possessed every virtue in a degree higher than  any other human being, St. Joseph was nearer to that perfection than anyone else.

For love of God, he became the protector of Our Lady and the defender of the Christ Child. He was wholly devoted to them for all of his life. Joseph was a quiet saint whose pivotal role in our salvation hinged on his littleness, which—in the end—became his greatness.

In every need, let us go to Joseph, not just in this year devoted to him, but always.

Saint Joseph, Pray for us!