The feast day of St. Mark the Evangelist is celebrated on April 25th, and his symbol is the winged lion. To commemorate this important author of the Gospel of Mark, I am sharing my experience when I went to Venice and learned that his remains rest there.

Falling in Love with St. Mark in Venice

Ever since I was a child, I always liked the idea of Venice. Coming from Latin America it seemed to me like a beautiful fairy tale place, situated so far, far away. Then when I grew up, so it happened that I moved to the U.S. and was able to go on vacation with my husband to Italy. Our destination was Rome, and maybe a few cities more if we had time, and Florence was also definitely on the list.

Being in Italy I just knew that we had to go to Venice too - finally I got the chance! My husband didn't love the idea when I told him that I wanted to go because it was pretty far from Rome - almost 6 hours by train. Since I know my husband very well, I know how to persuade him; I paid for the ticket to go to my dream city. 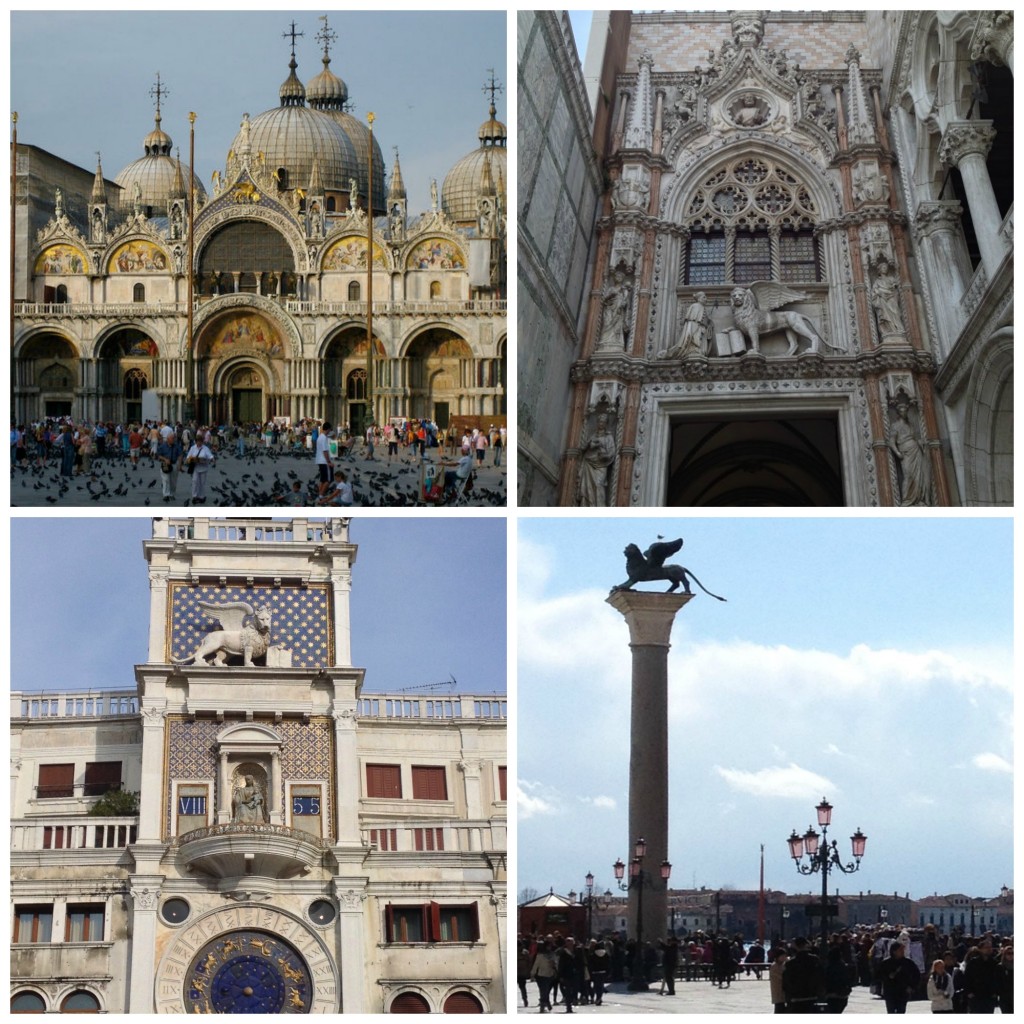 Venice was everything that I expected, but better.

I felt like I was on a different planet, the place is so charming with its terra color and unique Venetian Gothic architecture - a combination style of Byzantine and Islamic influences. It looks like an enchanted place when you see those buildings that look like they are floating on the water; not to mention riding in the gondolas . . . I instantly fell in love with that place and made it my favorite place on earth  - to visit, not to live.

I went to Venice ignoring all the history behind the city.

I thought to myself, "what's with the lion?" They are everywhere; gazing down from buildings or standing on columns. The more you look, the more you see: no one knows how many there are. There is so much to tell about the lions of Venice, but in short, the lion is the traditional symbol of Venice and it represents the evangelist St. Mark, who has been this city's patron saint ever since his remains were taken from a tomb in Alexandria, Egypt and brought to Venice in 828 AD. 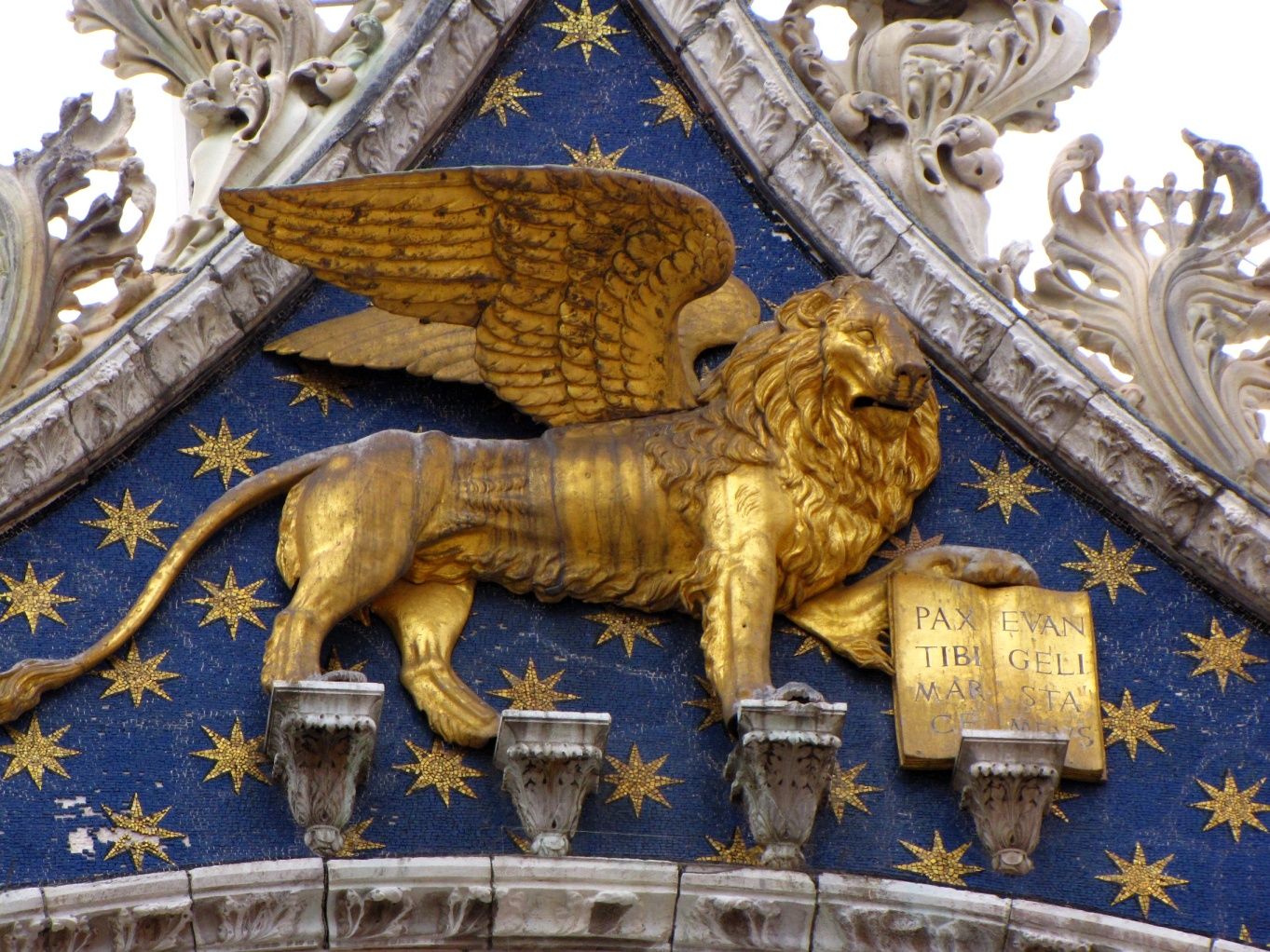 I visited the Basilica di San Marco (St Mark's Basilica) which is designed to impress. With the help of a tour guide I was deciphering what was on inside - otherwise you are literally lost. I stood before some of the finest Byzantine architecture in the world, dedicated in honor of St Mark.

I learned about the history behind those columns, decorated with marble and gold mosaics. I learned that every little detail tells the story of the Blessed Virgin Mary, the martyrdom of St. Peter and St. Clement, the events in the lives of St. John the Evangelist, St. John the Baptist, etc. In short, you can breathe history in here. 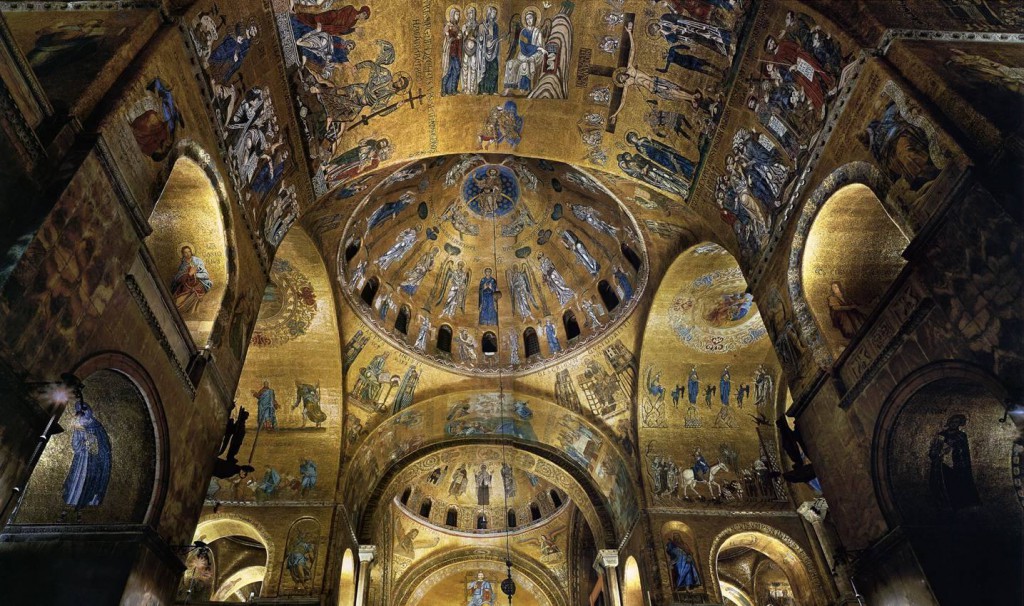 The interior of St. Mark's Basilica in Venice

I don't know much about Christian history, and I don't have too much time to read either  (I am a working mom with two sons - one in his peak of the terrible twos, if that helps in some way to illustrate my life), but I learned that Mark was Pedro's (Peter's) disciple and he traveled to Alexandria and founded the Catholic Church in Alexandria, Egypt. He became the first bishop there and he is honored as the founder of Christianity in Africa. He was martyred by the pagans of the city who resented his efforts to turn the Alexandrians away from the worship of their traditional gods. They placed a rope around his neck and dragged him through the streets until he was dead. 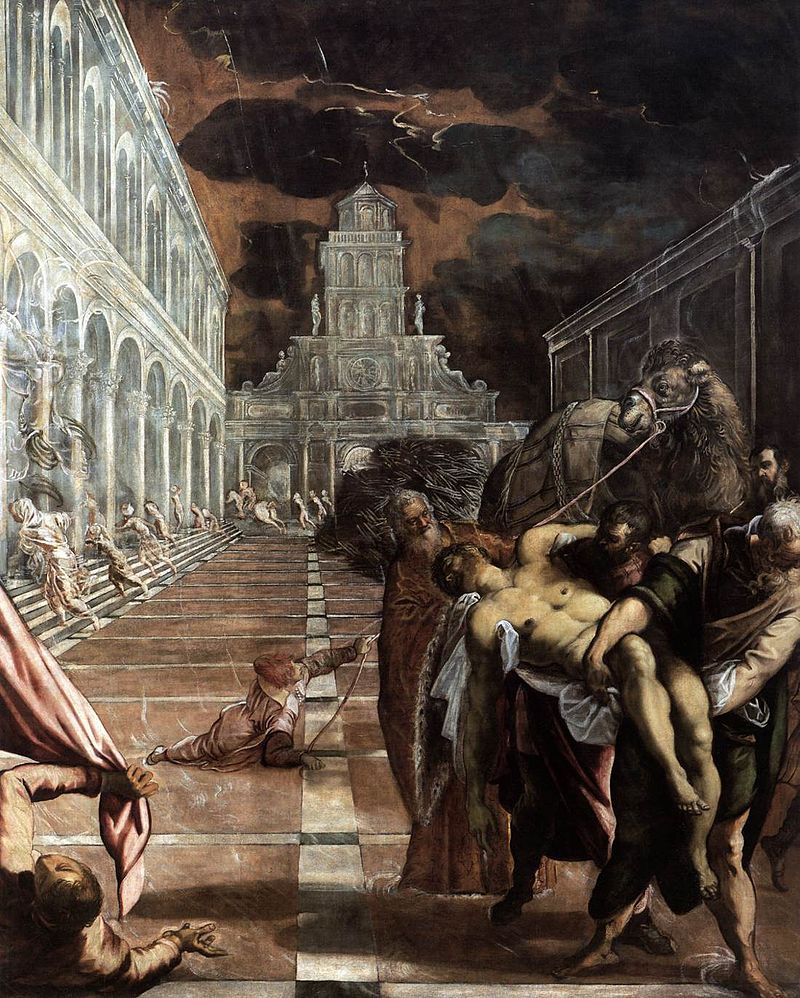 The Tomb of Saint Mark

"Peace be upon you, O Mark, my Evangelist." Venetian legend has it that, while visiting the region of Italy that would later become Veneto, Mark was approached by an angel, greeted with those words, and told that the Venetian lagoon would be his ultimate resting place.

When I learned that the coffin behind the high altar kept the relics and parts of the body of Saint Mark the Evangelist, I felt like somebody removed a blindfold from my soul and I realized that everything that I read and learned only through books and movies since I was a child about the Bible, the Gospel, and the saints were all true. It was like a living proof and I found myself in an emotional moment: I started to cry uncontrollably . . . It is like a warm feeling that you can only attribute to the Holy Spirit. It was beautiful, but at the same time I felt embarrassed that other tourists would see me crying, so I tried to control myself. I shouldn't be ashamed of that, but I wasn't prepared for that spiritual moment. It has followed me ever since.

I studied at a Catholic school, but I don't remember them encouraging us to learn beyond the Bible, such as the lives of the saints.  The same happened to my cousin, who went to a Catholic school in El Salvador; he couldn't tell me anything about the saint the school was named for. Now that I've grown up, I've realized what beautiful and inspiring stories we have missed in our life's journey.

{video of the high altar at St. Mark's Basilica where the saint's relics are kept}

I felt lucky and blessed of have been in Venice because I learned more than books could have taught me: Saints are not from the past. We can meet them now.

I am a lay Catholic, and an ordinary woman that wanted to go to a place because I thought that it looked nice. I ignored what was behind the city and its deeper spiritual meaning. For me, the moral of the story is how important it is to educate ourselves about our Catholic faith, because if we don't, we can miss a lot of profound spiritual opportunities.

If you see the inside of St. Mark's basilica with earthly eyes, it might seem like a dark and gloomy place to you, when compared with the basilicas in Rome for example. I have heard from other people that they have no great desire to return to Venice, or they get bored after just two days in the city. This was not the case for me. Especially after that I learned the story behind the walls and how they are part of the rich history of the Catholic Church. 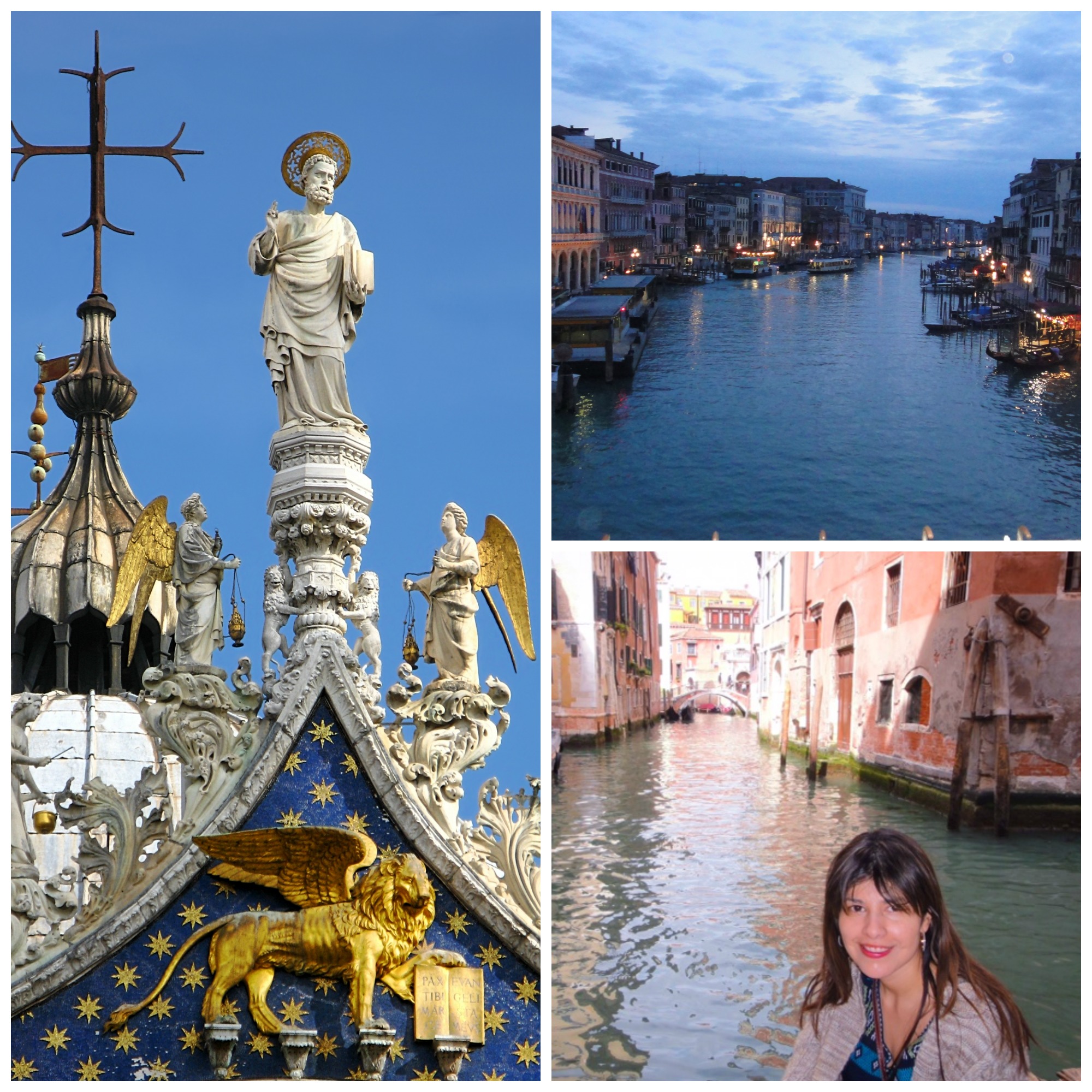 Let's love our faith! Please share with us how you have found more meaning in your Catholic faith while on a pilgrimage to a holy place, or through reading the lives of saints.