St. Roch, also known as St. Rocco, was a nobleman from Montpellier, France, the only son of the wealthy governor of the city.

St. Roch (c. 1295–1327) was born with an unusual and deep red mark on his chest in the shape of a cross, a sign that the Blessed Virgin Mary had heard and answered his mother's prayers for her barrenness to be healed. As a child, St. Roch was deeply religious, fasting twice a week after the example of his pious mother. His parents died when he was twenty years of age, after which he gave his inheritance to the poor, handed the government of the city over to his uncle, and began a new life as a poor mendicant pilgrim.

Free from all earthly cares, St. Roch joined the Third Order Franciscans, donned the familiar pilgrim's garb (a common practice of popular piety at the time) and set out on a pilgrimage to visit and pray at the holy places in Rome.

When he came upon the town of Acquapendente near Viterbo, he saw that it was badly struck by the black plague which was wreaking havoc across Europe. He sojourned there for a time to care for the sick both in private homes and in the hospitals—at great risk to himself.

Instead of contracting the highly contagious disease, St. Roch cured many people simply by making the Sign of the Cross over them. He continued his charitable work until the disease was halted from spreading further in the village, after which he continued on his pilgrimage. His miraculous healing power evidenced itself in the same manner in every plague-infested town that he passed through on his way to Rome, and in Rome itself.

When his travels brought him to the town of Piacenza, he discovered that he was no longer spared from the deadly disease, having finally contracted it in the leg. Instead of burdening anyone with his sickness, he commended himself to God and awaited his death in a remote and abandoned forest hut. Providentially, a local nobleman's hunting dog found and befriended him, bringing him food daily and licking his wounds. A spring arose nearby to provide St. Roch with fresh water. 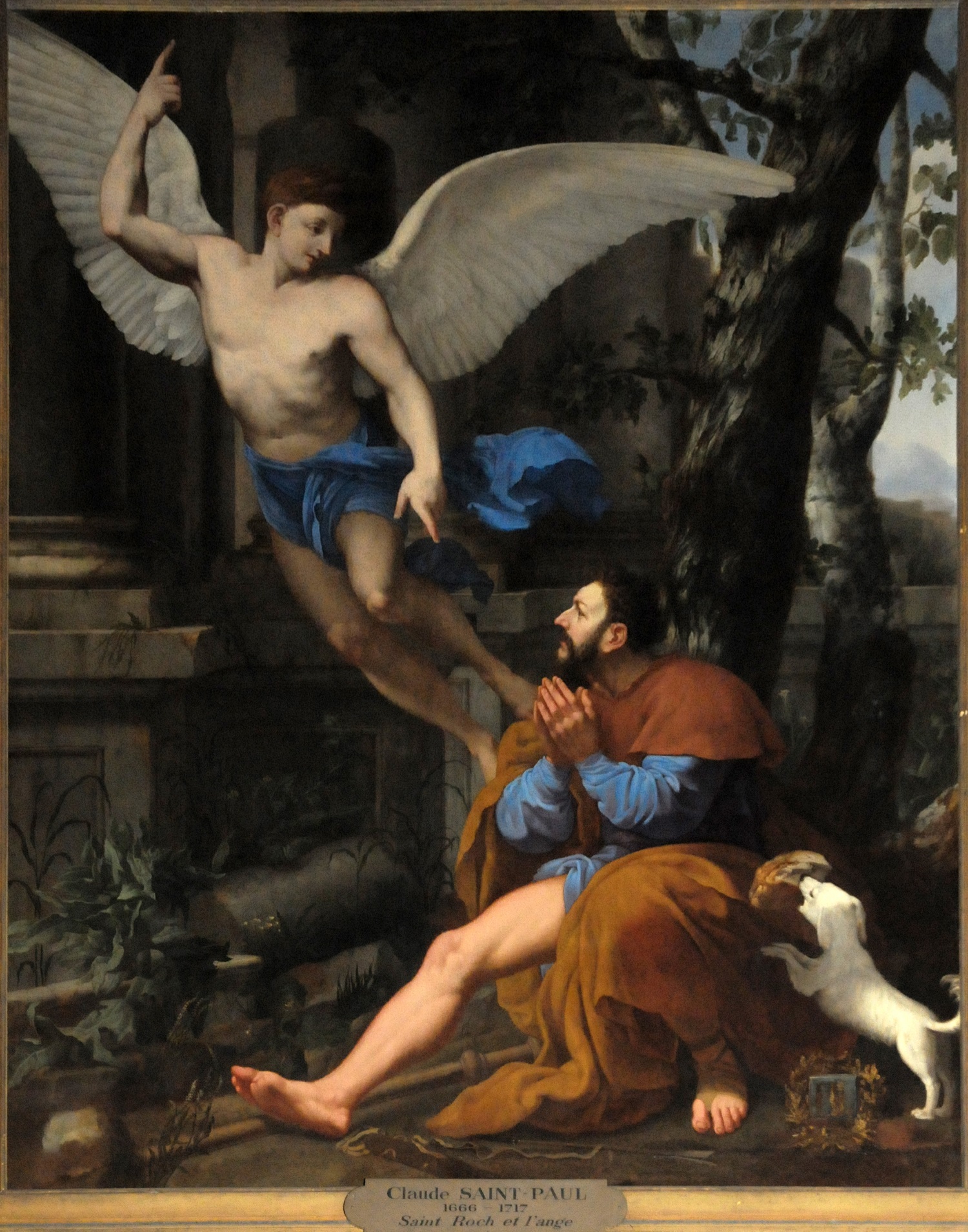 The nobleman followed his dog into the woods one day, which led him to discover and aid the holy pilgrim. Slowly St. Roch's health was restored, after which he received divine inspiration that he should return to his native Montpellier.

Once there he found the city at war. He refused to disclose his identity to the soldiers so that he could remain poor and unknown, having renounced his former life as the son of the governor. But his obfuscation aroused suspicion. He was accused of being a spy disguised as a pilgrim. St. Roch did not defend himself against these charges—wishing to conceal his true (and noble) identity—and instead entrusted himself completely to God's will.

He was cast into prison by his own uncle, who failed to recognize his nephew's altered appearance. According to legend, St. Roch was forgotten and abandoned in prison—but God sent angels to minister to him while he was held in captivity. He died there five years later.

As told by a Franciscan hagiographer, Marion A. Habig, O.F.M.:

When he felt that his end was drawing near, Saint Roch asked that a priest might come and administer the last sacraments. The priest, on entering the prison, beheld it supernaturally lighted up and the poor captive surrounded with special radiance. As death claimed its victim, a tablet appeared on the wall on which an angelic hand wrote in golden letters the name of Roch, and the prediction that all who would invoke his intercession would be delivered from the plague. Informed of all that took place, Saint Roch's uncle came to the prison and, shortly after, also the governor's mother, that is, Roch's grandmother. She identified the dead man as her grandson by the birthmark of the red cross on his breast. They gave him a magnificent funeral and had a church built in his honor, in which his body was entombed. His veneration was approved by several popes and soon spread throughout Europe.

Later, during the Council of Constance in 1414, the plague broke out again in Rome. The Council Fathers turned to St. Roch, the patron against the plague, and arranged that prayers and public processions be held in his honor, after which the plague ceased.

Because of his patronage against infectious disease, St. Roch was a highly-regarded saint in the late Middle Ages, especially in those Italian towns in which he exercised his healing powers. Many of these town have chosen him as their patron.

St. Roch is often depicted as a pilgrim with a walking staff and seashell (the symbol of a pilgrim), an open sore on his leg, an angel by his side, and a dog at his feet. He is the patron saint of dogs, dog owners, knee problems, surgeons, invalids, bachelors, diseased cattle, and against cholera, plague, skin rashes and diseases, contagious diseases, pestilence, and epidemics.

His feast day is August 16th. 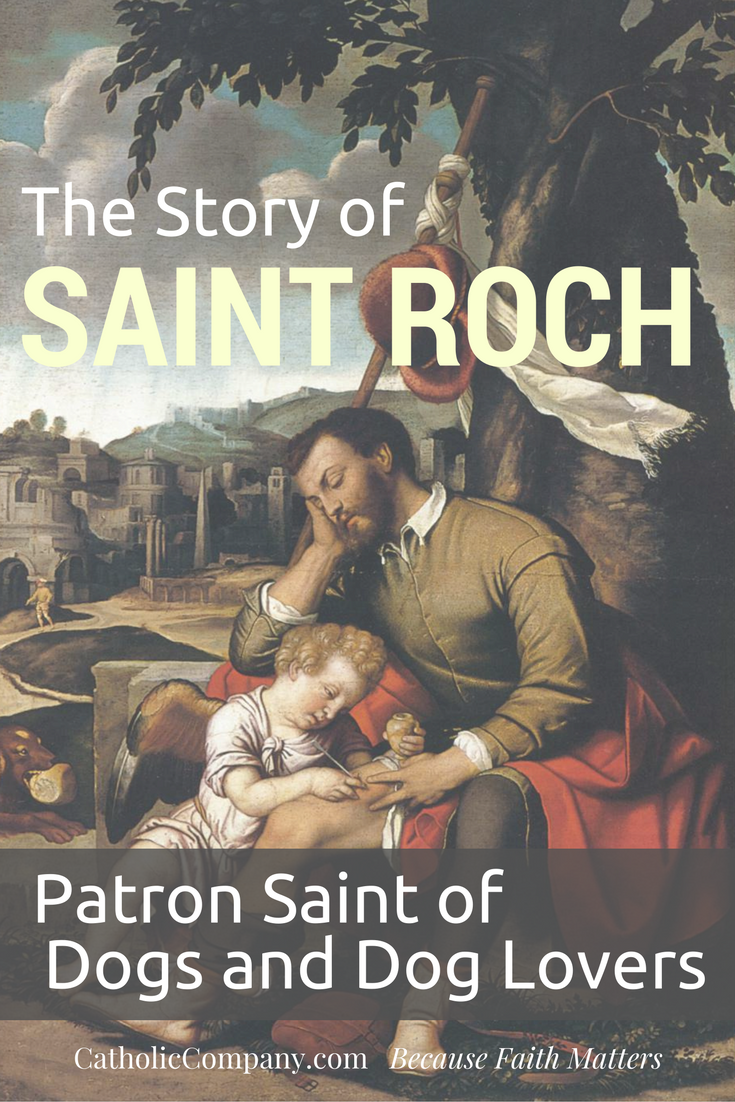 This article has been updated. It was originally published in August 2016. © The Catholic Company