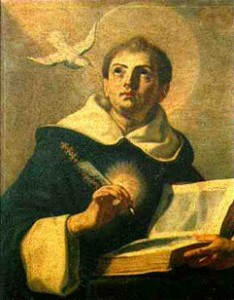 St. Thomas Aquinas was born in approx. 1226 and died less than 50 years later in 1274. He was discovered as having a quick and clever wit from an early age, as well as preserving in chastity that was astounding amid all of the wordly temptations. These virtues as well as his deep understanding of the metaphysics of angels have led to his title, the Angelic Doctor. St. Thomas Aquinas is also known as the “dumb ox.” He received this title during his years of schooling in Cologne in which he was very quiet and quite large. St. Thomas Aquinas joined the Dominican Order, after his years in school despite opposition from his family, and pursued writing, teaching, and preaching with great fervor.

Saint Thomas Aquinas is the master scholastic. His philosophy and theology were intertwined through the inspiration of Augustine and Aristotle. Today St. Thomas Aquinas’ largest accomplishment is his philosophy of the right connection between faith and reason. Aquinas silenced many critics in his day and even today by putting reason in the service of faith and God. He ushered in a new era in renewed interest in philosophy by theologians through his writing’s and teaching’s. Not surprisingly, St. Thomas Aquinas is the patron saint of universities and students. His feast day is January 28th.