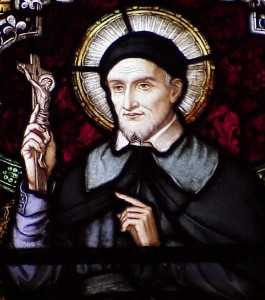 St. Vincent de Paul was born to a poor family.  Luckily he was a very bright child and therefore received his education early on from the Franciscan Friars.  He continued his education in divine studies at University of Toulouse and was ordained at the young age of 20.  In 1605 he would begin an adventure he could have never imagined.

While on a voyage to Narbonne, he was captured by African pirates and taken as a slave to Tunis.  Could you imagine going from being a priest in France to being a slave?  How would you react?  What would you do?  St. Vincent de Paul lived as slave for 2 years until finally converting his slave master to Christianity and convincing his slave master to free him.

Upon returning to France, St. Vincent de Paul began the work that has made him well-known today.  He started numerous charitable organizations aimed at helping the poor, the sick, and the unemployed.  According to many, charity was the predominate virtue of St. Vincent de Paul, and he also lived a life of great humility.

St. Vincent de Paul reminds us that we are charged to care for those less well-off than ourselves.  With great power, wealth, or fame comes also great responsibility.  If we are not caring for others, then we are using God’s gifts wrongly.  Saint Vincent de Paul used all that he had to benefit those others in great need and we should learn from his example.  It is not always easy, but it is certainly what is asked of us to make us the best people we can be.  The people we were made to be!