In March of 2011, I went with my mom to visit a boarding school for teenage girls who want to begin discerning consecrated life. On one of the days, the director announced that we were going to visit the National Shrine of Our Lady of La Salette in Massachussets.

I remember thinking, Who in the world is Our Lady of La Salette, and what was her message? and I can imagine that many of you are thinking the same thing. Here we will attempt to unpack the basics of this sobering Marian apparition and reflect on its significance. 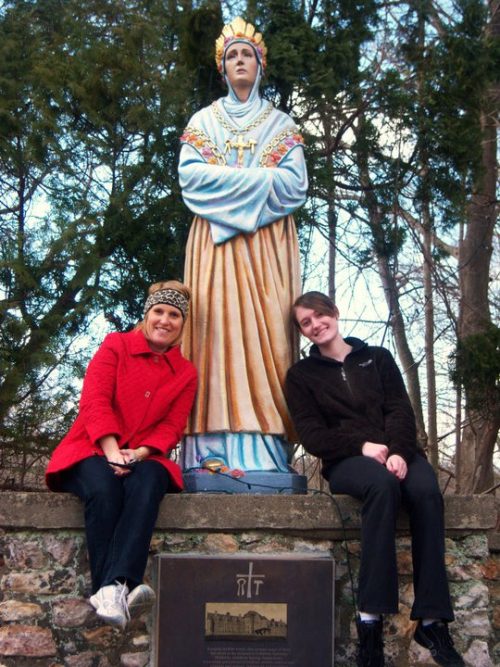 At the National La Salette Shrine in Massachusetts

The apparition of Our Lady of LaSalette has been recognized by the Church, mores specifically Bishop de Bruillard of Grenoble, France. While there has been some controversy about specific times and events spoken of in the La Salette apparitions, this article will only strive to lay out the basics of the original apparition messages from 1846. The following comes from the La Salette Missionaries website:

After many years of prayer, serious inquiries and conscientious and extensive research, Bishop de Bruillard in his doctrinal pronouncement of May 1, 1851 pronounced the following:

'We judge that the Apparition of the Blessed Virgin to two shepherds, September 19, 1846, on a mountain in the Alps, in the parish of La Salette… shows all the signs of truth and the faithful have grounds for believing it indubitable and certain.'

The Shepherd Children’s Encounter with Our Lady of LaSalette

On September 19, 1846—the century following the diabolical French Revolution—Our Lady appeared to two shepherd children, Maximin Giraud and Melanie Calvat, in La Salette, France. She was weeping, and she told them of a time of impending trial for France as well as for the whole world. Our Lady first spoke to the two children together before entrusting them each individually with a secret:

Come near, my children, be not afraid; I am here to tell you great news. If my people will not submit, I shall be forced to let fall the arm of my Son. It is so strong, so heavy, that I can no longer withhold it. For how long a time do I suffer for you! If I would not have my Son abandon you, I am compelled to pray to him without ceasing; and as to you, you take no heed of it.

Maximin’s Secret from Our Lady

The children were then individually given two separate secrets, which they recorded in July of 1851 for the Church authorities. Although this Marian apparition has been subject to controversy and misrepresentation, below is purported to be the entirety of Maximin's original account of the secret entrusted to him, described in his own words and translated from the original French:

Here is what this Lady said to me:

“If my people continue, what I will say to you will arrive earlier, if it changes a little, it will be a little later. France has corrupted the universe, one day it will be punished. The faith will die out in France: three quarters of France will not practice religion anymore, or almost no more, the other part will practice it without really practicing it.

Then, after [that], nations will convert, the faith will be rekindled everywhere. A great country in the north of Europe, now Protestant, will be converted; by the support of this country all the other nations of the world will be converted.

Before all that arrives, great disorders will arrive, in the Church, and everywhere. Then, after [that], our Holy Father the Pope will be persecuted. His successor will be a pontiff that nobody expects. Then, after [that], a great peace will come, but it will not last a long time. A monster will come to disturb it. All that I tell you here will arrive in the other century, at the latest in the year two thousand.”

Melanie’s Secret from Our Lady

Below is purported to be the complete text of the secret given to Melanie:

“Mélanie, I will say something to you which you will not say to anybody: The time of God’s wrath has arrived! If, when you say to the people what I have said to you so far, and what I will still ask you to say, if, after that, they do not convert, (if they do not do penance, and they do not cease working on Sunday, and if they continue to blaspheme the Holy Name of God), in a word, if the face of the earth does not change, God will be avenged against the people ungrateful and slave of the demon. My Son will make his power manifest! 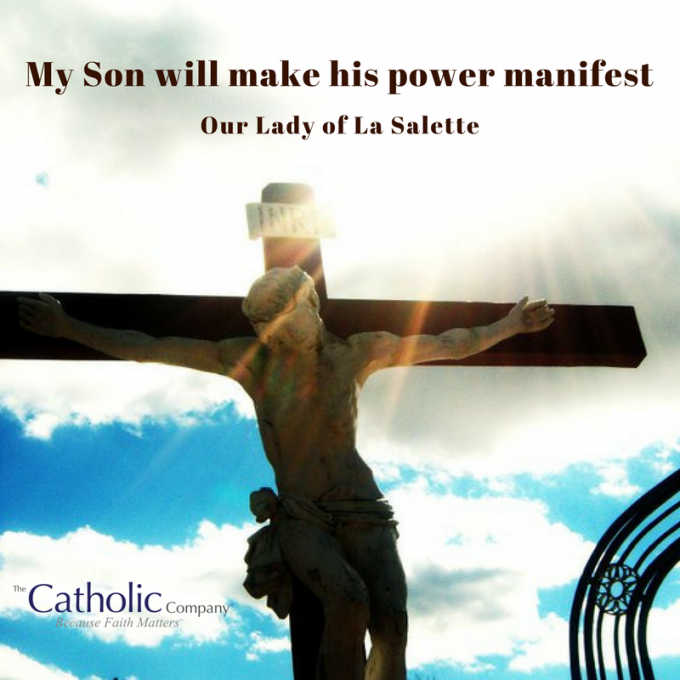 Paris, this city soiled by all kinds of crimes, will perish infallibly. Marseilles will be destroyed in a little time. When these things arrive, the disorder will be complete on the earth, the world will be given up to its impious passions.

The pope will be persecuted from all sides, they will shoot at him, they will want to put him to death, but no one will be able to do it, the Vicar of God will triumph again this time. The priests and the Sisters, and the true servants of my Son will be persecuted, and several will die for the faith of Jesus Christ. A famine will reign at the same time.

After all these will have arrived, many will recognize the hand of God on them, they will convert, and do penance for their sins. A great king will go up on the throne, and will reign a few years. Religion will re-flourish and spread all over the world, and there will be a great abundance, the world, glad not to be lacking nothing, will fall again in its disorders, will give up God, and will be prone to its criminal passions.

At first Our Lady of La Salette’s message appears rather disheartening, if not despairing. Mary speaks of much suffering and tribulation to come because of lack of respect for the Sabbath, for the Holy Sacrifice of the Mass, and because of taking her Son's name in vain.

Our Lady’s urgent severity is rightly spoken. From 1846 up to the present day, we have lived in a world consumed by work and productivity, oftentimes with little regard for the sacredness of Sunday. We live in a world where the name of God is thrown about callously or even mockingly, and only one in a thousand bat an eye at this.

Nearly two thousand years ago, Jesus used the parables of the servants (Mt. 24: 45-51) and other parables to show that those who live in spiritual mediocrity or carelessness on earth will be held strictly accountable for their actions.

As well as having basic foundations in the Gospel, many details of the La Salette apparition serve as precursors to the apparitions in Fatima, Portugal: the appearance to poor shepherd children, the local and even political persecution they faced afterwards, sobering warnings regarding the need for repentance, and the price to be paid if her warnings are not heeded. It is fascinating to mark these similarities, and to wonder if they were meant to be a wake up call to Europe in the face of future events, as well as a preparation of fertile ground for Our Lady of Fatima’s messages of repentance.

On a more individual level, Mary’s prophesies may certainly shake us up a bit, or a lot, and cause us to ask almost in a panic, What will this look like when it happens? What will happen to me? What will happen around me and to those I love?

Be at peace! Mary herself gives us a way to repent and grow in holiness through the daily recitation of her Holy Rosary. Below are other ways we can respond to Our Lady of LaSalette's messages.

3 Ways to Respond to Mary’s Messages with Urgency and Serenity:

1. Keep the Sabbath holy by attending Mass regularly and receiving Our Lord in the Eucharist with as much reverence and love as you can.

2. If you find yourself beginning to use the Lord’s name in vain, turn that moment into a quick prayer for strength and serenity, such as Mary, wrap me in your peaceful mantle or God, come to my assistance.

3. Pray and fast in reparation for the times when we ourselves as well as others have caused pain to Our Lord and Our Lady’s hearts, especially in regards to the Sabbath and God’s name. 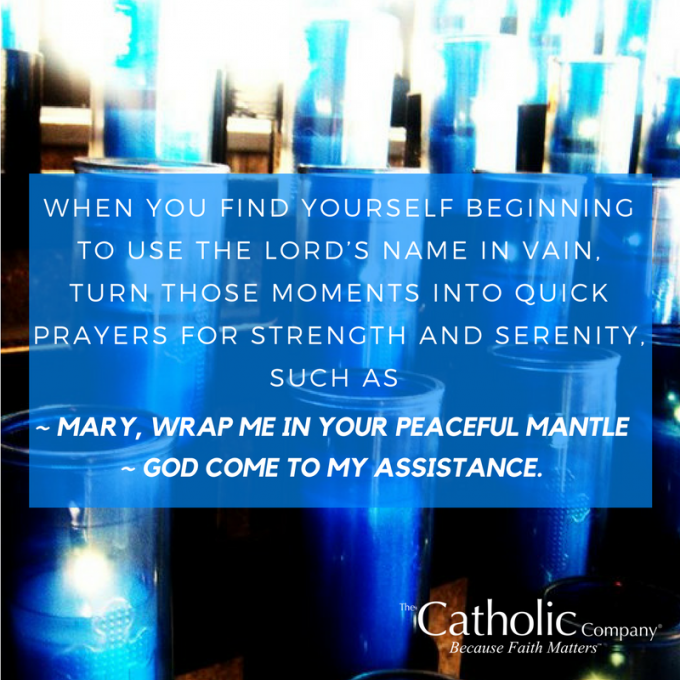 Toward the Future With Hope

When I visited the huge outdoor La Salette shrine, I remember standing in front of the image of Our Lady of La Salette, shivering in the cold New England air, reflecting on Mary’s sober message with despondence.

At one point I looked down and was shocked to see a single white crocus blooming at my feet. It was as if Mary was whispering to me, Yes, these times are cold and dark, but I still stand here as your mother and your guide. Stay close to me and you will come through this winter and safely into the springtime of heaven… 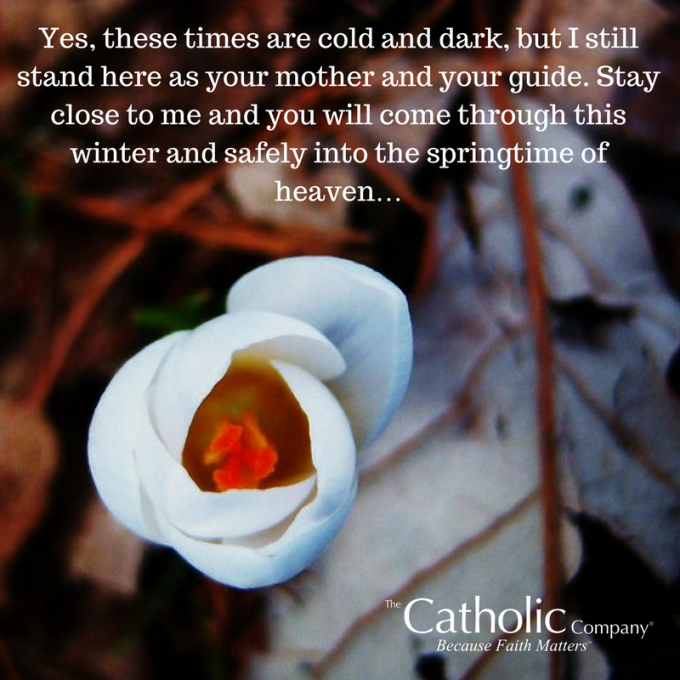 While the message of La Salette points out the grim reality of our sinfulness, it should not be cause for despair. Mary’s message also contains many instances of hope and examples of people heeding God’s call to heroic holiness. With grace, prayer, penance, and perseverance we can be among the number of those who bring consolation to the Sacred Heart of Jesus, and those who wipe the tears from the eyes of Our Lady of La Salette.

Let us ask for her intercession in a special way today, her feast day, September 19th. Our Lady of La Salette, pray for us! 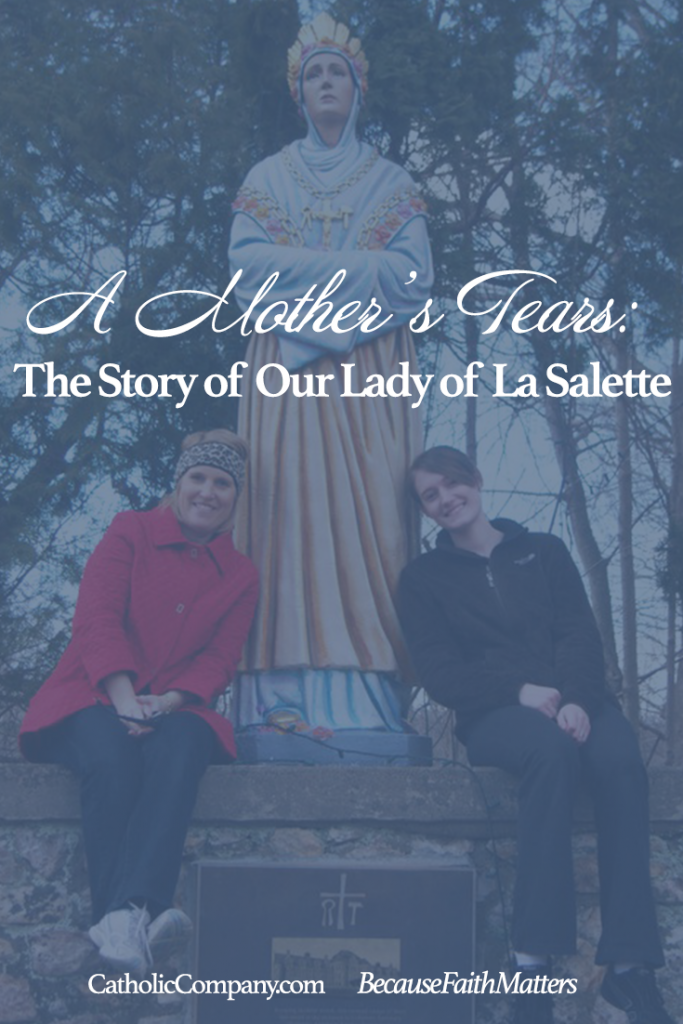