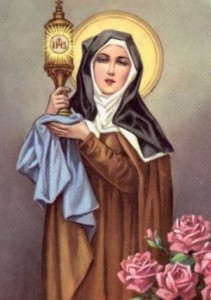 Today is the feast day of one of the most beloved saints, St. Clare of Assisi.  St. Clare was a woman of courage, faith, and trust in God above all else.  Did I know St. Clare personally?  Well, no, she died in 1253.  I know this about her through her incredible story in which she took many powerful leaps of faith in God.

The Story of St. Clare

St. Clare was born into a noble Italian family.  She faced struggles early in life, including the death of her father when she was very young.  Her life began to change when she heard the preaching of St. Francis of Assisi.  The words of St. Francis lit a fire in her as she began to strongly desire living a life parallel to that of St. Francis, in complete service to God and dependence on Him.

However, she was not without doubts, fears, and concerns.  She, like many of us, waited for a sign from God to know that she was called to the religious life of poverty and service.

She received her sign in 1212 when she was presented with a palm by her bishop on Palm Sunday.  She then took her cousin, Pacifica, and together they ran off, found St. Francis, and took the veil.  What amazing faith!  To leave your comfortable life and family behind and completely serve Christ!  What faith and trust in the Lord! From this moment on St. Clare’s life would forever be changed.

St. Clare, upon taking the veil, began the Poor Clares and led them for 40 years.  Many young women, including her own sister and mother, joined the Poor Clares over the years.  These sisters wore no shoes, lived in a poor house, ate no meat, kept silent most of the time, and lived solely off the financial support of donors.

After founding the Poor Clares more challenges abounded for St. Clare and her sisters.

Many remember the story of the St. Clare defending her sisters at San Damiano from an invading army.  An army was invading Assisi and planned on raiding the Poor Clares convent first.  St. Clare had her sisters carry her, since she was very sick, to the gate and she brought with her the Blessed Sacrament and prayed before it for protection.  Legend has it that the army approached the convent but became suddenly fearful and fled the convent gates.  What faith and trust in God it takes to act as Saint Clare did!

St. Clare also wrote a rule for the Order, called Clare’s Rule, so that the corporate poverty of the Order would be maintained and so that popes wouldn’t be able to impose their own.  St. Clare died of natural causes in 1253.  She is the patroness of television because during her bedridden sickness an image of Mass would display on the wall of her cell since she could not make it to Mass physically.

Saint Clare lived a life of faith, trust, courage, and love of God. She teaches all of us that we need to have the faith and courage to take a leap of faith.  It made all the difference in St. Clare’s life and we are all better for it.  What do you learn from the life of St. Clare?  What do you take from her story?