This guest post was written by Mary Kate Hetzel

In 1597, Paul Miki and his twenty five companions were crucified for their Christian faith in Nagasaki, Japan.

A Japanese layman, St. Paul Miki was born into a Japanese noble family and was heir to a great inheritance and position in Japanese society.  He was was converted to Christianity by the great Saint Francis Xavier. When Christian missionaries first began to evangelize in Japan, they were not initially met with opposition. Their presence opened the door not only to a new faith, but also to trade and economic expansion.

The tide changed in 1596, when Taikosama became the effective ruler of Japan under the emperor. He launched a brutal campaign of persecution aimed not only at curbing the further spread of Christianity, but wiping out any sign of its current existence.

This is apparent in the vastly ranging slew of occupations, ages, and nationalities among the twenty six men who were force marched 600 miles over 30 days to meet their death in Nagasaki.  The group included Franciscan and Jesuit foreign missionaries and Japanese lay people, several of whom were Franciscan Tertiaries.

They were repeatedly offered freedom if they would renounce Christianity; they all declined.  When the march ended in Nagasaki, the twenty six martyrs were tied to crosses and the execution notice was read, upon which the men started to pray and sing while Paul Miki began to preach in a loud voice:

“Having arrived at this moment of my existence, I believe that no one of you thinks I want to hide the truth. That is why I declare to you that there is no other way of salvation than the one followed by Christians. Since this way teaches me to forgive my enemies and all who have offended me, I willingly forgive the king and all those who have desired my death. And I pray that they will obtain the desire of Christian baptism.”

The man reading their death sentence sought to paint the killings as a necessary government measure. He told the crowd the martyrs were all men from the Philippines who had come to infiltrate Japanese society and erode their traditions with their lies. Paul Miki spoke above him and told the truth about his Japanese heritage and spoke of the truth of the Gospel that the missionaries had shared and the salvation that could be won by all.

Here are St. Paul Miki's words as he hung on his cross:

“The sentence of judgment says these men came to Japan from the Philippines, but I did not come from any other country. I am a true Japanese. The only reason for my being killed is that I have taught the doctrine of Christ. I certainly did teach the doctrine of Christ. I thank God it is for this reason I die. I believe that I am telling only the truth before I die. I know you believe me and I want to say to you all once again: Ask Christ to help you to become happy. I obey Christ. After Christ’s example I forgive my persecutors. I do not hate them. I ask God to have pity on all, and I hope my blood will fall on my fellow men as a fruitful rain.”

These first martyrs of Japan were then stabbed to death while hung on their crosses, but the crowd who heard the testimony of Paul Miki and his companions would immortalize his words and use them to spread Christianity to Japan. Their feast day is celebrated on February 6th.

“Like my Master, I shall die upon the cross.

so that my blood and my love can flow out

upon the land and sanctify it to his name.” 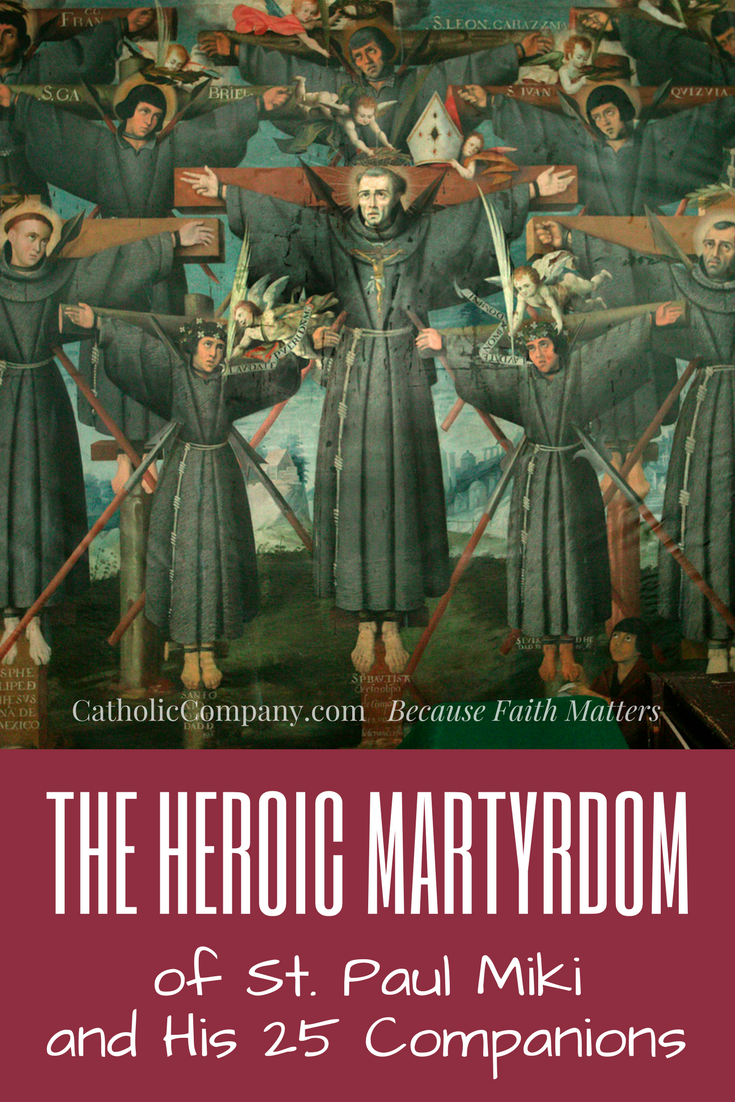 This article has been updated and was originally published in February 2015. © The Catholic Company. All rights reserved.