Pope John Paul II had a great devotion to the Blessed Virgin Mary from his childhood, and, as such, he faithfully wore a scapular (notice him wearing his scapular in the below photo). He is reported to have worn a brown scapular since he was a boy, and he insisted that doctors not remove it during his emergency surgery following the assassination attempt on his life on May 13, 1981, the feast of Our Lady of Fatima.

“Just before the Holy Father was operated on, he told the doctors, ‘Don’t take off the scapular.’ And the surgeons left it on.”

The Holy Father credited the miraculous preservation of this life to the protection of the Blessed Virgin Mary under her title of Our Lady of Fatima. He famously placed the bullet that nearly killed him in the crown of the Our Lady of Fatima statue in Fatima, Portugal.

At the Miracle of the Sun at Fatima on October 13, 1917, Our Lady appeared to Lucia, Francisco, and Jacinta as Our Lady of Mt. Carmel while holding a brown scapular. 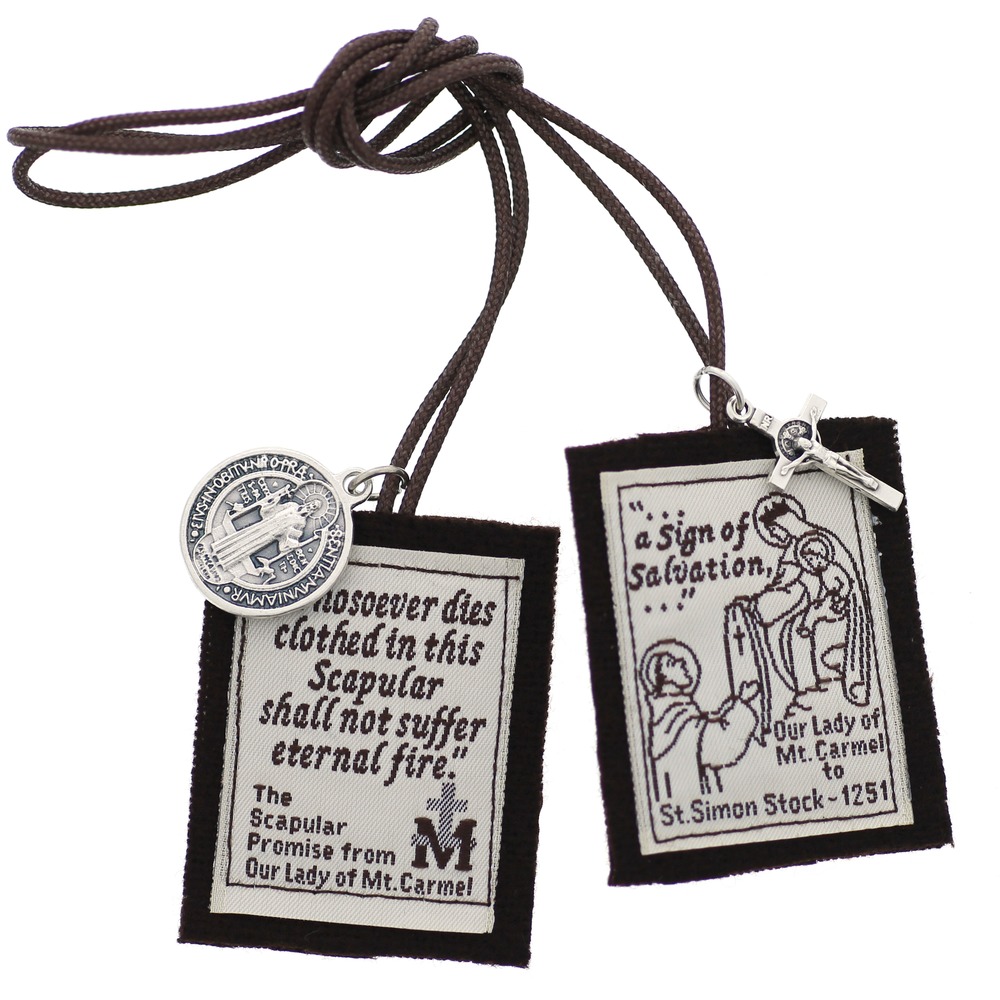 In his message to the Carmelites at the 750th anniversary of the bestowal of the scapular, Pope John Paul II said those who wear the scapular — or habit, as he called it — dedicate themselves to the service of Our Lady for the good of the whole Church.

"The sign of the Scapular points to an effective synthesis of Marian spirituality, which nourishes the devotion of believers and makes them sensitive to the Virgin Mother's loving presence in their lives. The Scapular is essentially a "habit". Those who receive it are associated more or less closely with the Order of Carmel and dedicate themselves to the service of Our Lady for the good of the whole Church."

"Two truths are evoked by the sign of the Scapular: on the one hand, the constant protection of the Blessed Virgin, not only on life's journey, but also at the moment of passing into the fullness of eternal glory; on the other, the awareness that devotion to her cannot be limited to prayers and tributes in her honour on certain occasions, but must become a "habit", that is, a permanent orientation of one's own Christian conduct, woven of prayer and interior life, through frequent reception of the sacraments and the concrete practice of the spiritual and corporal works of mercy. In this way the Scapular becomes a sign of the "covenant" and reciprocal communion between Mary and the faithful: indeed, it concretely translates the gift of his Mother, which Jesus gave on the Cross to John and, through him, to all of us, and the entrustment of the beloved Apostle and of us to her, who became our spiritual Mother."

“This shall be a privilege for you and for all Carmelites: whoever dies clothed in this shall not suffer eternal fire, rather, he shall be saved.”

The Brown Scapular is a sacramental of the Catholic Church, a devotion as old as the Holy Rosary.  A sacramental is, by definition, “a sacred sign which bears resemblance to the sacraments, and by means of which spiritual effects are signified and obtained through the prayers of the Church” (CCC 1667).  Today there are many different kinds of scapulars associated with various devotions and religious orders with various attached promises. Learn more about them here: How to Use the Scapular.

This article has been updated and was originally published in April 2014. © The Catholic Company