Each year on June 22nd we celebrate the feast day of two notable saints and martyrs: Thomas More and John Fisher. It is fitting that these men share a feast day, because they were both Englishmen martyred within two weeks of each other. They were martyred for the same cause (religious freedom) on the same occasion (defending the sanctity of marriage and Papal authority against State usurpation) and at the hands of the same man (King Henry VIII). 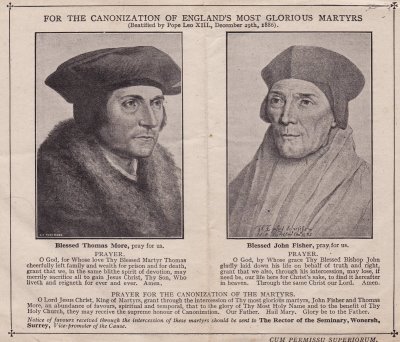 In addition to this, they were beatified together (by Pope Leo XIII in 1886) and canonized together (by Pius XI in 1935). Through the centuries they stand together—one a layman and statesman, the other a priest and bishop—as models and heroes of religious freedom against encroaching government power. 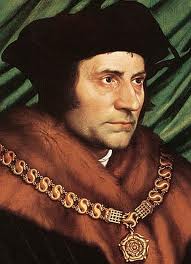 Saint Thomas More died a martyr's death at the hands of England's infamous King Henry VIII. Although once good friends, St. Thomas More fell into disfavor with the King when he refused to compromise his conscience and his faith for the sake of friendship, career, power, wealth, and worldly prestige.

According to Pope John Paul II's Apostolic Letter on St. Thomas More, More was "highly esteemed by everyone for his unfailing moral integrity, sharpness of mind, his open and humorous character, and his extraordinary learning."

More served in parliament, on the King's council, as a diplomat, and in many other notable positions in public administration. He was also first and foremost a faithful Catholic, a loving husband, and devoted father.

He was eventually promoted by King Henry VIII himself to the high office of Lord Chancellor—a position that was second in authority to the king. More resigned from this post when the Henry VIII, in open defiance of infallible Church teaching, desired to divorce his wife in order to marry another woman, and declare himself sovereign of the Church of England in order to make it happen. Thomas More refused to accept or condone King Henry's unconscionable actions, choosing to resign from his high position rather than be complicit in this great evil.

After trying unsuccessfully to persuade his former friend to his side, King Henry VIII imprisoned Sir Thomas More in the Tower of London where he was eventually condemned and beheaded. At his trial, Thomas More testified boldly for Church autonomy over the State, for the authority of the Pope as head of the Church, and for the indissolubility of marriage in the eyes of God—even when he knew he would die for it. St. Thomas More refused to undermine his Catholic faith and died a martyr's death upholding the truth, with integrity and without compromise.

In October of 2000, after many petitions, Pope St. John Paul II published his apostolic letter on Thomas More in order to name him the patron saint of statesman and politicians, "Given his inflexible firmness in rejecting any compromise with his own conscience," forever giving those who serve the State a model of unwavering integrity and virtue in the face of enormous political pressure. He was martyred on July 6, 1535, just two weeks after St. John Fisher's own martyrdom.

O God, for Whose love Thy Blessed Martyr Thomas cheerfully left family and wealth for prison and for death, grant that we, in the same spirit of devotion, may merrily sacrifice all to gain Jesus Christ, Thy Son, Who liveth and reigneth for ever and ever, Amen. 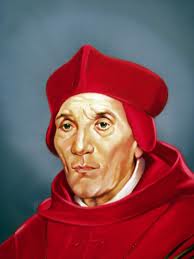 Like St. Thomas More, St. John Fisher also had a personal connection with King Henry VIII, as a friend of the royal family who was once entrusted as the young king's tutor. Sir John Fisher was known for being a man of great learning and great faith, having been appointed a lifetime seat as the Chancellor of Cambridge University and Bishop of Rochester.

Bishop John Fisher fell into disfavor with King Henry VIII when he supported the Queen of England, Catherine of Aragon, against the unlawful divorce the King sought to obtain from her. In defense of the Queen, he declared that he was willing to die to uphold the integrity of marriage. He also warned parliament of the king's encroaching power over the Catholic Church in England in disregard of ultimate Papal authority.

King Henry VIII never forgave Fisher for this defiance. Despite secret attempts on his life, Fisher preached against divorce from the pulpit at the same time Sir Thomas More, likewise in protest of the King's actions, resigned from his high office. For his rebelliousness to the king, or rather, for his faithfulness to the Church, John Fisher was imprisoned multiple times. One of these arrests came about shortly after King Henry VIII secretly married his lover, Anne Boleyn, and just ahead of an official announcement of his divorce from the Queen followed by Boleyn's coronation. After the danger of Fisher's outspokenness and public rebuke passed, he was released from prison.

Not long after this, parliament passed an act that would officially recognize the marriage of King Henry VIII and Anne Boleyn under pain of treason for those who refused to follow suit. Fisher refused to comply with this unjust law, and was once again imprisoned in the Tower of London, this time for good. While imprisoned the Pope elevated him to Cardinal, but the king rejected the appointment.

At the time of his impending death, the people of England rightly saw a strong resemblance between John Fisher's martyrdom and that of St. John the Baptist, who was also beheaded for speaking out against a ruler's unlawful divorce and remarriage. Because of this strong resemblance, King Henry VIII was afraid to let Fisher live until the feast day of St. John the Baptist on June 24, and had him killed two days before. The irony is that John Fisher was due to be hanged, drawn, and quartered, but because the King hastened his death ahead of the popular feast day, he was beheaded instead . . . just like St. John the Baptist.

O God, by Whose grace Thy Blessed Bishop John gladly laid down his life on behalf of truth and right, grant that we also, through his intercession, may lose, if need be, our life born for Christ’s sake, to find it hereafter in heaven. Through the same Christ our Lord. Amen. 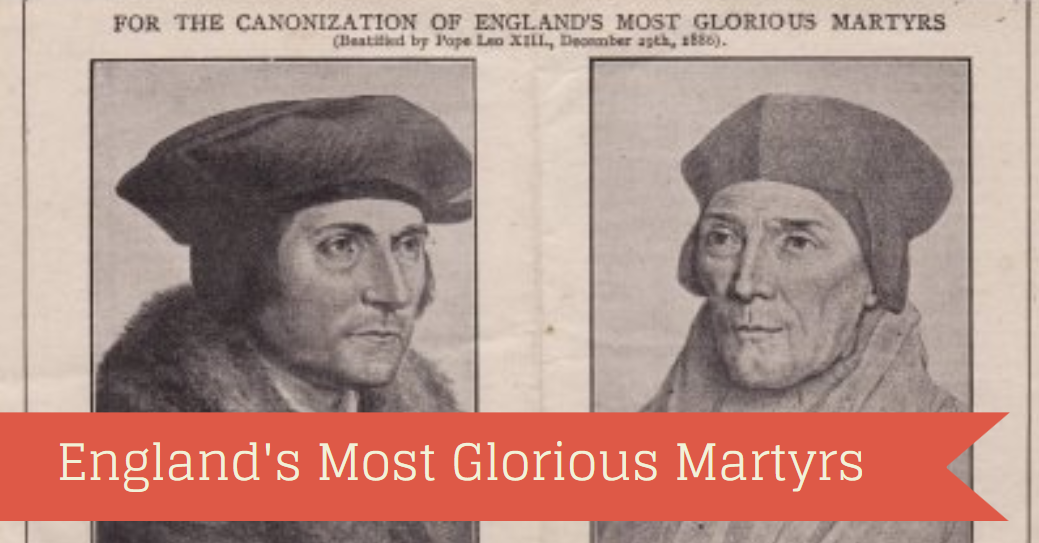 Saints for All Times

Saint John Fisher and Saint Thomas More stood up to a powerful, intelligent, and charismatic king when he went threatened them. King Henry VIII became corrupt when he lusted after women and power—eventually having six wives, separating the Church of England from Rome, declaring himself its head, and killing those who publicly opposed him.  At the same time, these evil actions on the part of a king-turned-tyrant were an opportunity for two holy men to earn the eternal crowns of martyrdom and sainthood in faithfulness to Jesus Christ and his Catholic Church.

Saints Thomas More and John Fisher, pray for us! 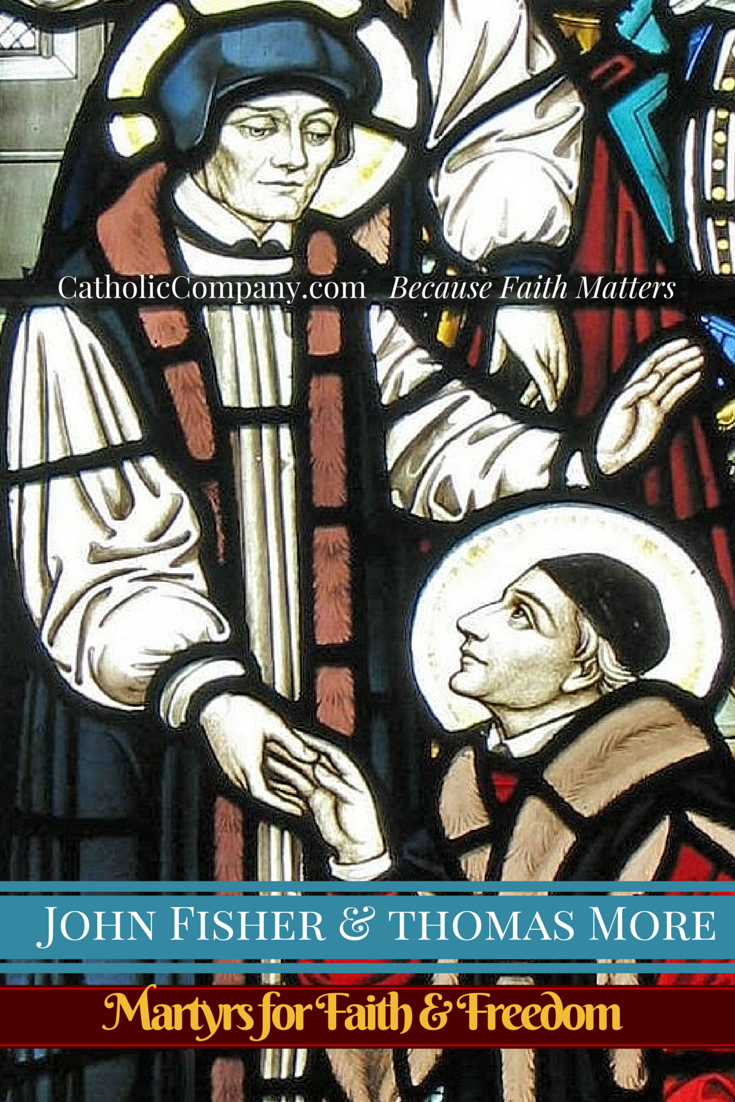