More than a year ago, I had never heard of Wuhan, China, and I imagine many others could say the same. Now, Wuhan is a household word, one of the most recognizable locations in the world.

Long ago, Wuhan was an outpost for Catholic missionaries to China, who brought the Faith to one of the oldest and largest populations in the world and claimed souls for Christ.

I recently learned about two such priests martyred in Wuhan to whom St. Therese of Lisieux had a particular devotion. Their stories transfixed her. She kept one of their holy cards in her breviary.

These Vincentian priests were Catholic missionaries: St. Francis-Regis Clet, C.M. (1748-1820), and St. Jean-Gabriel Perboyre, C.M. (1802-1840). They were martyred for their heroic witness and living out incredible charity in a place that was hostile to everything they believed. 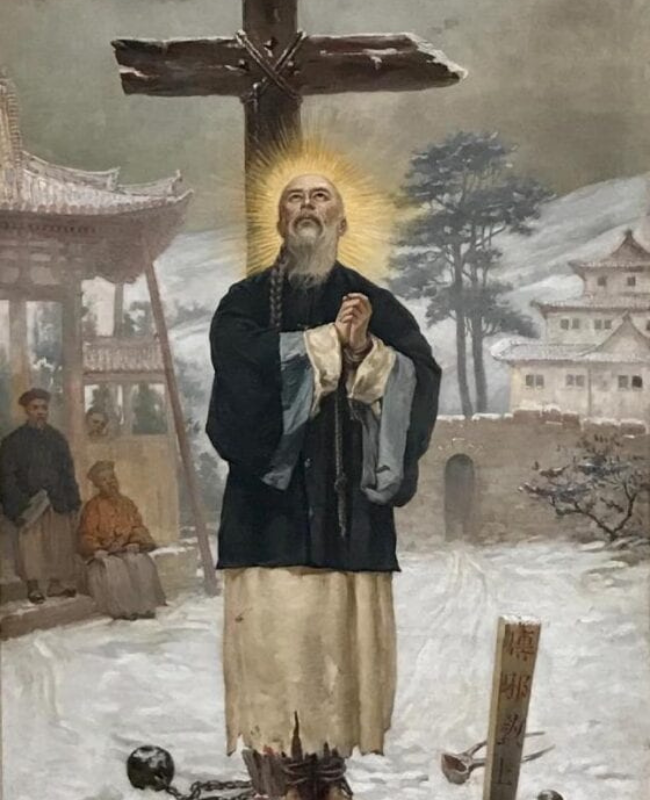 
St. Francis-Regis was the tenth of fifteen children. He joined the Vincentians because of his admiration for St. Vincent de Paul. He had a special love for the poor and marginalized. Living in Paris during the French Revolution, he faced the violent persecution of Catholics, and when priests were exiled from their country, he asked to be sent to China.

He wished to leave a place he saw as turning away from God and serve one that did not yet know Him. His heart’s desire was to share the Lord in this foreign land, where he would face an even more terrifying persecution.

Chinese Christians were hated and attacked in every way imaginable. His letters reveal the horrible treatment they received. From 1789 to 1818, he served tirelessly as a missionary to the Chinese faithful.

In May of 1818, the Imperial Palace in Beijing was enveloped in a horrible storm. Thunder and lightning ignited the sky, which is said to have turned red as it unleashed incredible and damaging winds and rain.

Advisors to the Emperor told him it was the spiritual work of the missionaries, and the Emperor commanded they arrest Fr. Clet, who was by then seventy years old. The officials could not locate him. Faithful Catholics got word to Fr. Clet, who remained hidden in caves and in the woods for six lonely months.

The Demands of Love

Despite the difficult conditions and his advanced age, he continued to serve God and the devout Chinese faithful. He eventually sought refuge with a Chinese Catholic family but was discovered, arrested, and tortured cruelly for refusing to denounce the Faith.

His thirty years as a missionary in China came to an end when he was martyred in Wuhan. Tied to a wooden pole, with a rope wrapped tightly around his throat, he was suffocated over time, but kept alive in order to extend the suffering and serve as an example to other Christians.

A wooden peg was used to tighten the rope at intervals. When it appeared that St. Francis-Regis was on the verge of suffocation, the peg was unwound, he was allowed to breathe, and the punishment was repeated after he gasped for air. Finally the executioner twisted the peg and did not release it, and St. Clet died at the hands of the Chinese government.

The feast day of this incredible saint is February 18. 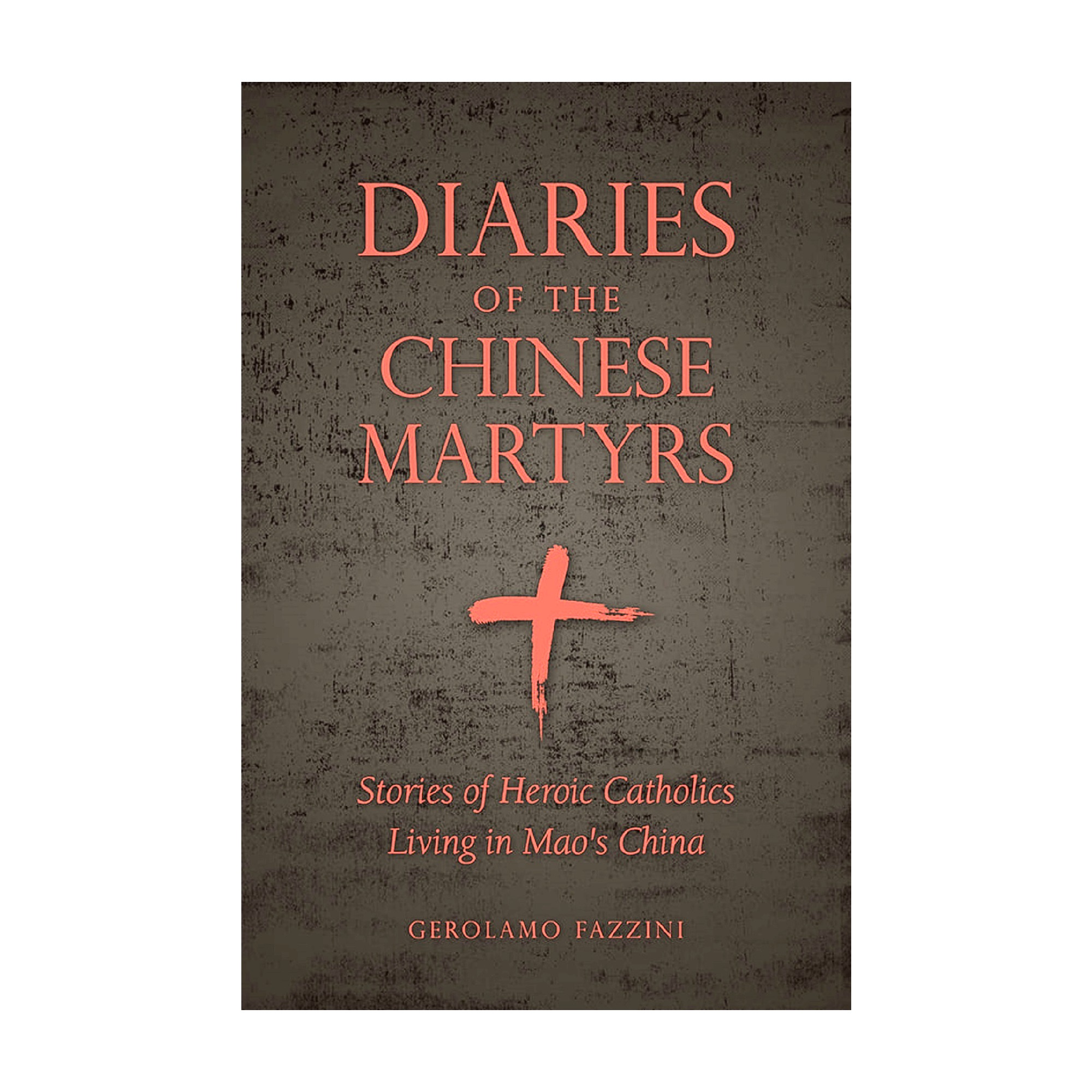 St. Jean-Gabriel was one of eight children in his family, five of whom became priests and nuns. He accompanied his younger brother to the seminary on behalf of his parents and was surprised to find his own calling. When his brother became ill and died on the way to missionary work in China, St. Jean-Gabriel volunteered to take his place.

He arrived there in 1835, fifteen years after the death of St. Francis-Regis Clet, as the country was continuing to persecute Christians and the world continuing to send missionaries to help the faithful in China know Christ. It was no secret that many missionaries were losing their lives to bring Christ to China. Most of these men knew they would die for the Faith and the Chinese people. 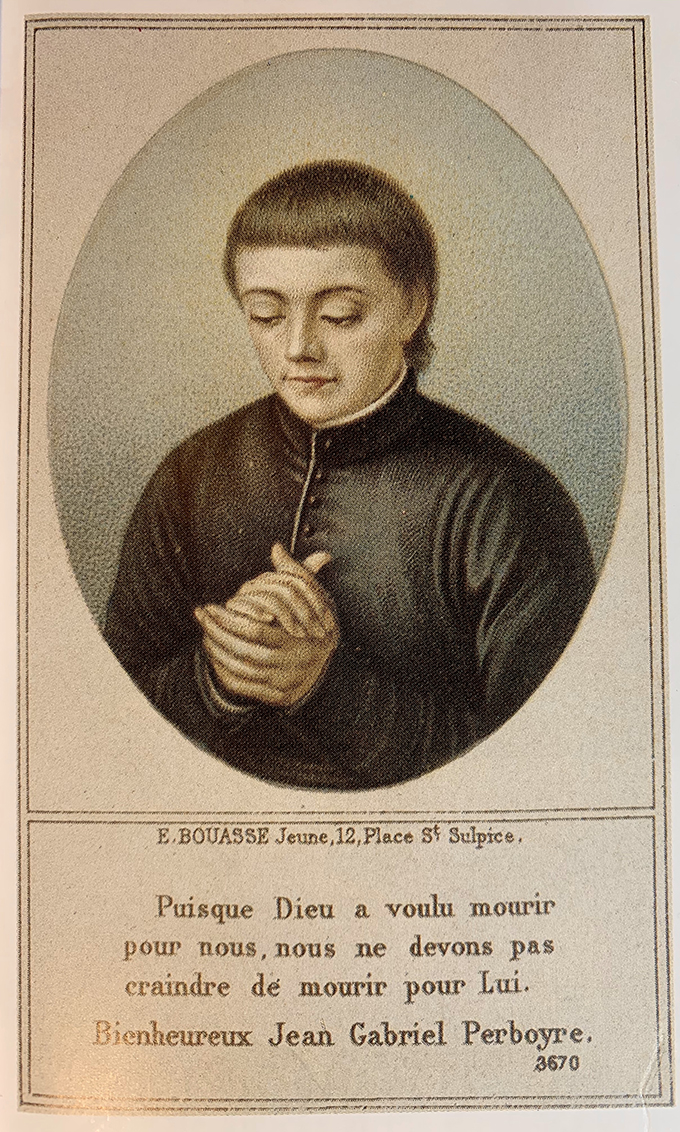 St. Jean-Gabriel Perboyre's Holy Card, from the Breviary of St. Therese of Lisieux

St. Jean-Gabriel served the impoverished and afflicted in China for three years, particularly by rescuing and caring for the many poor and abandoned children whom he taught the Catholic faith.

In 1839, when the government formally instituted widespread and violent persecution of the Christians, some missionaries went into hiding, but St. Jean-Gabriel refused.

After Mass, a faithful member of his community warned him that the officials were on their way to the Church. One of his catechumens had betrayed him. He could not leave before consuming all of the Blessed Sacrament, knowing it would be profaned. He was able to escape into the woods and hide in local caves, moving to avoid detection, just as St. Francis-Regis had. Perhaps he even shared the same spaces in exile without knowing it.

Officials eventually arrested him, took him to a dung hill, and ordered him to trample the Crucifix and reveal the whereabouts of his confreres. He refused and was branded on the face with the words “teacher of false religion,” then dragged through the town, dressed in his vestments.

He was imprisoned for about a year, in chains so tight he lost a foot and a hand. Several of his faithful friends who refused to abandon their pastor were cruelly tortured in prison alongside him. Eventually he crawled to his execution, was crucified and strangled, in the same method used years before on St. Francis-Regis.

His feast day is September 11th. 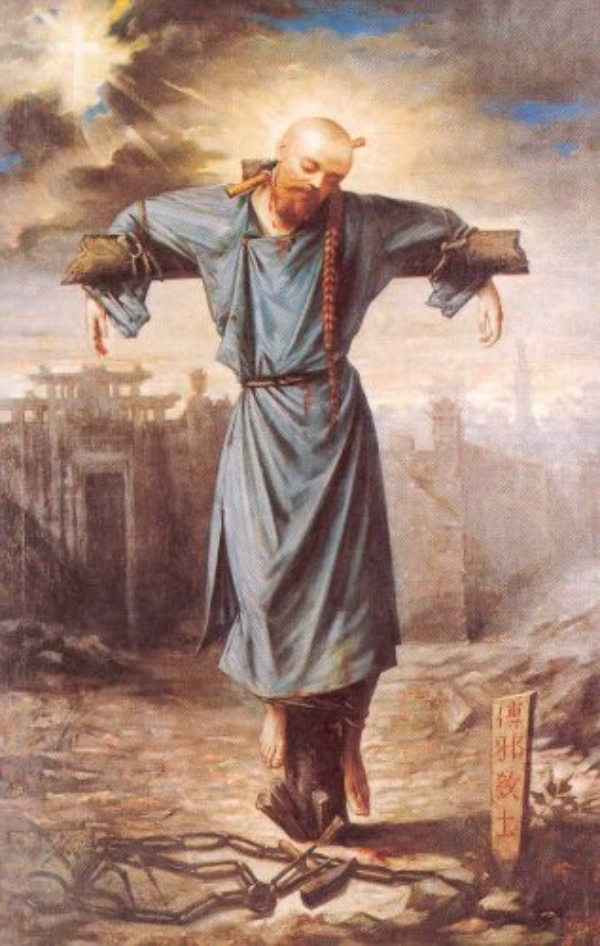 Blood of the Martyrs, Seed of the Church

Over 250,000 Christians have died for their faith in China. St. Perboyre was China's first saint, canonized in 1996. St. Clet's canonization followed in 2000. Since 1900, it is estimated that more martyrs have perished there than in all other countries of the world combined.

Missionaries brought Catholicism to China as early as the 16th century and estimates place the number of Chinese Catholics today at around 10-12 million, split between the underground and the official Church authorized by the Chinese Communist Party.

The long history of suppression has caused many Chinese Christians great suffering, but the faith is strong in China, and 180 years after the death of St. Perboyre, there is now a Catholic seminary in Wuhan.

The faithful eventually collected the remains of Sts. Clet and Perboyre and returned them to the Vincentians in Paris,  but their tombstones in Wuhan serve as monuments to the martyrs, where Catholics in China leave flowers, visit, and pray.

During the reign of Mao and the Cultural Revolution, from 1966-1976, the faithful in China hid the tombstones of these two humble martyrs in a Catholic home. Afterward, the Franciscan Bishop of Wuhan searched for and restored the stones, installing them in the Huayuanshan Catholic Seminary courtyard, where the seminarians of Wuhan care for them with great reverence, and local Chinese Catholics commemorate them there. 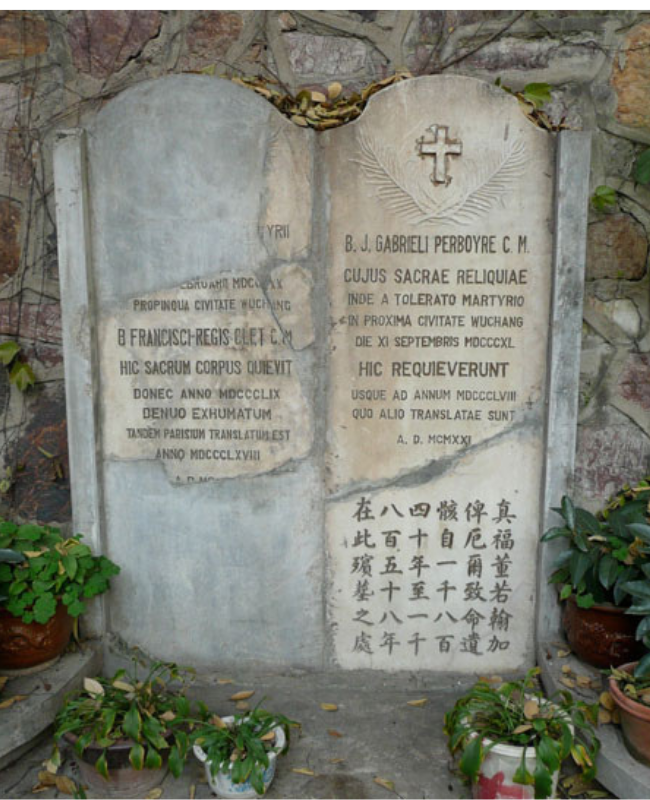 The tombstones of Sts. Clet and Perboyre - Photo by A. Clark, found in the DePaul University Archives

“I don't know what awaits me on the path that opens before me: without a doubt the cross, which is the daily bread of the missionary. What can we hope for better, going to preach a crucified God?"
—From a letter of St. Perboyre on his journey to China

These two special saints of Wuhan are relevant to both the current situation of China's Catholic faithful, practicing either an "underground" or "above ground" faith, and the current state in Wuhan and the world, afflicted by the spread of COVID-19, forced isolation, and the temptation to fear and anxiety. They are special intercessors for today.

Dr. Anthony Clark, a professor of Chinese History known for his devotion to Sts. Clet and Perboyre, reflects upon the fact that many local Chinese citizens remember their martyrdoms and pass down their stories. It is not lost on them that these two tortured priests died unable to breathe. What powerful intercessors in a time like ours, when many have suffered from the debilitating and sometimes deadly respiratory effects of COVID-19.

May the souls lost to the Coronavirus pandemic rest in peace, breathing freely with these two saints in heaven, and may Sts. Clet and Perboyre protect us here below.

St. Francis-Regis Clet and St. Jean-Gabriel Perboyre, pray for us!

From where are you drawing your inspiration during this difficult time?

Are there special saints who are encouraging and inspiring you?