From September to November 2015, the relics of St. Maria Goretti were sent from her basilica in Nettuno, Italy, to the United States on a "Pilgrimage of Mercy." The tour went to various parishes in the eastern half of the United States, and the video below shows highlights from her stop at St. Thomas Aquinas Catholic Church in Charlotte, North Carolina, on October 24-25, 2015. The tour will continue in the western half of the country in early 2016.

In March 2015, Pope Francis announced an Extraordinary Holy Year of Mercy (Jubilee of Mercy) beginning December 8, 2015. This visit of the major relics of St. Maria Goretti, called the "Pilgrimage of Mercy," is an effort on the part of the Holy See and Treasures of the Church, a ministry that evangelizes through personal encounter with the relics of the Church's saints, to prepare and catechize the United States for this great celebration in the life of the Church. 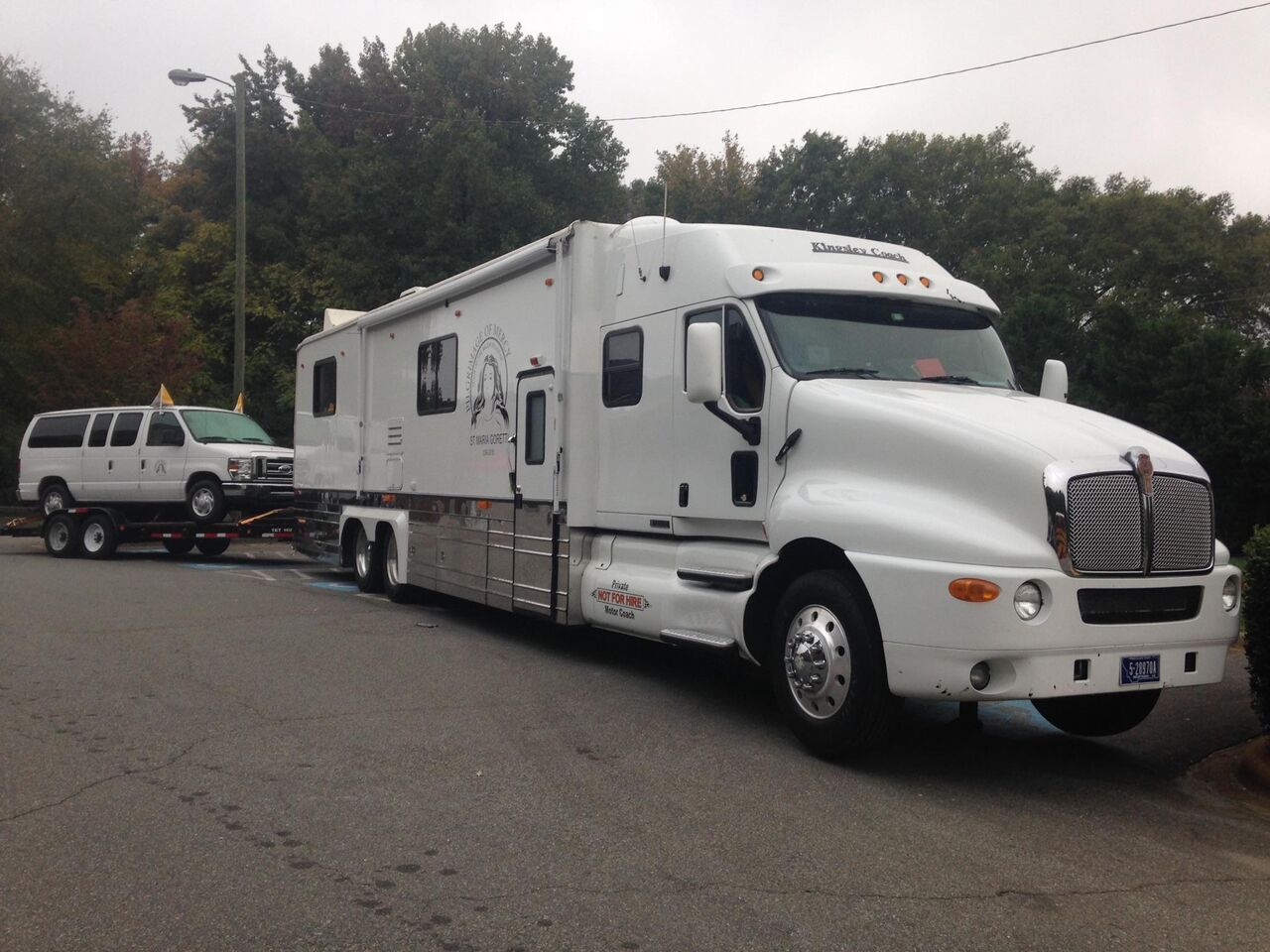 LEARN MORE ABOUT THE "LITTLE SAINT OF GREAT MERCY"

St. Maria Goretti (1890-1902) was a pious child who was murdered by her neighbor during an attempted rape. Because she both resisted and forgave her attacker, God has used her life, her soul, and her body in the most extraordinary ways. She is now regarded as the Patroness of Purity and is the Church's youngest canonized saint.

HER VISIT TO CHARLOTTE

The relics of St. Maria Goretti arrived in Charlotte in the early morning on Saturday, October 24th, kicking off a 24-hour veneration-a-thon for thousands of pilgrims from across the region. Inside the glass casket is a wax statue, made in her likeness, within which repose her skeletal remains (she is not incorrupt). 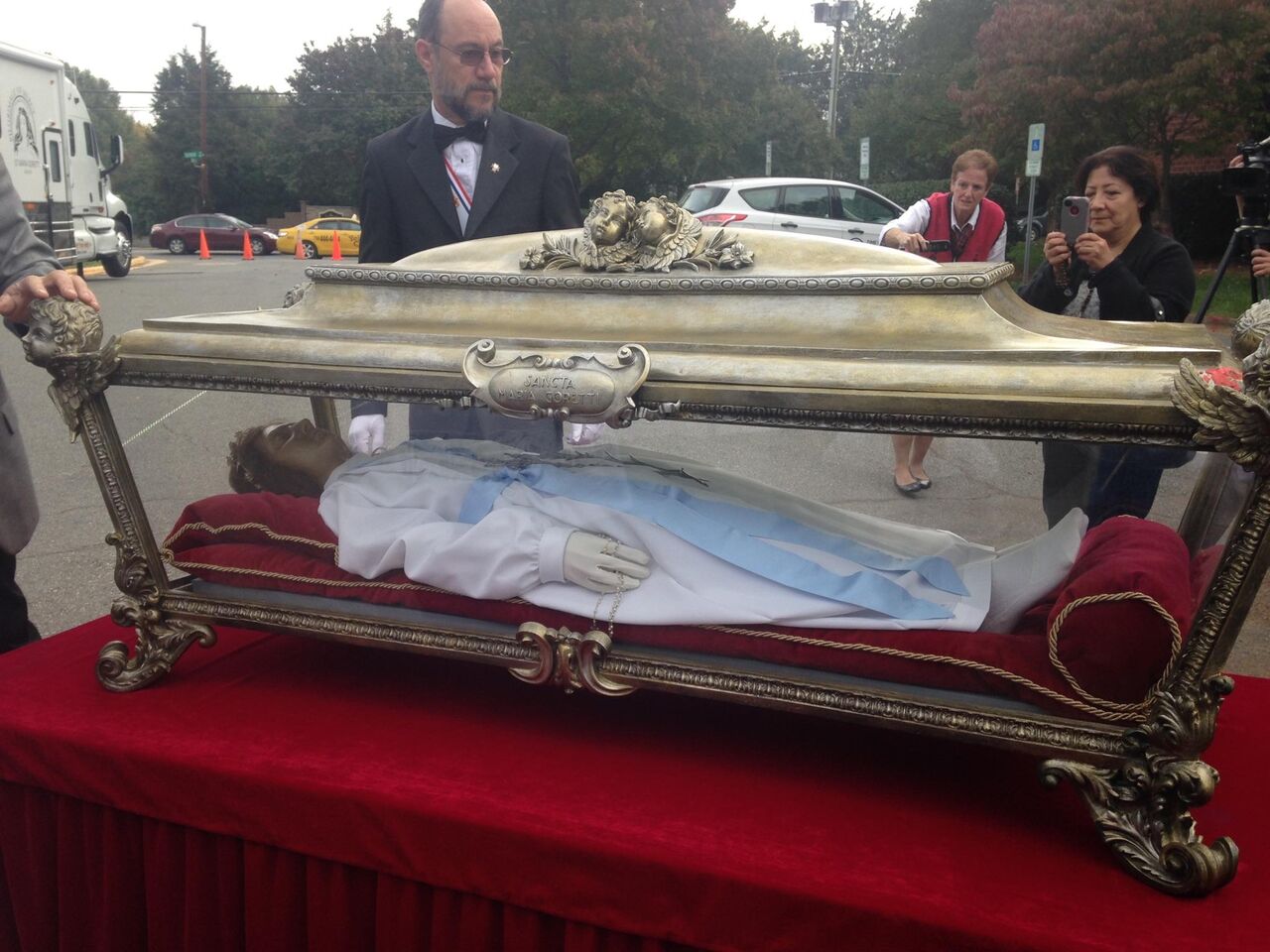 She was welcomed with a (standing room only) Solemn High Mass in the Extraordinary Form at 10:00am. The homily was given by Fr. Carlos Martins who is on tour with St. Maria's relics in order to share her life story, her message of forgiveness and mercy, as well as accounts of the many miracles obtained through her intercession. 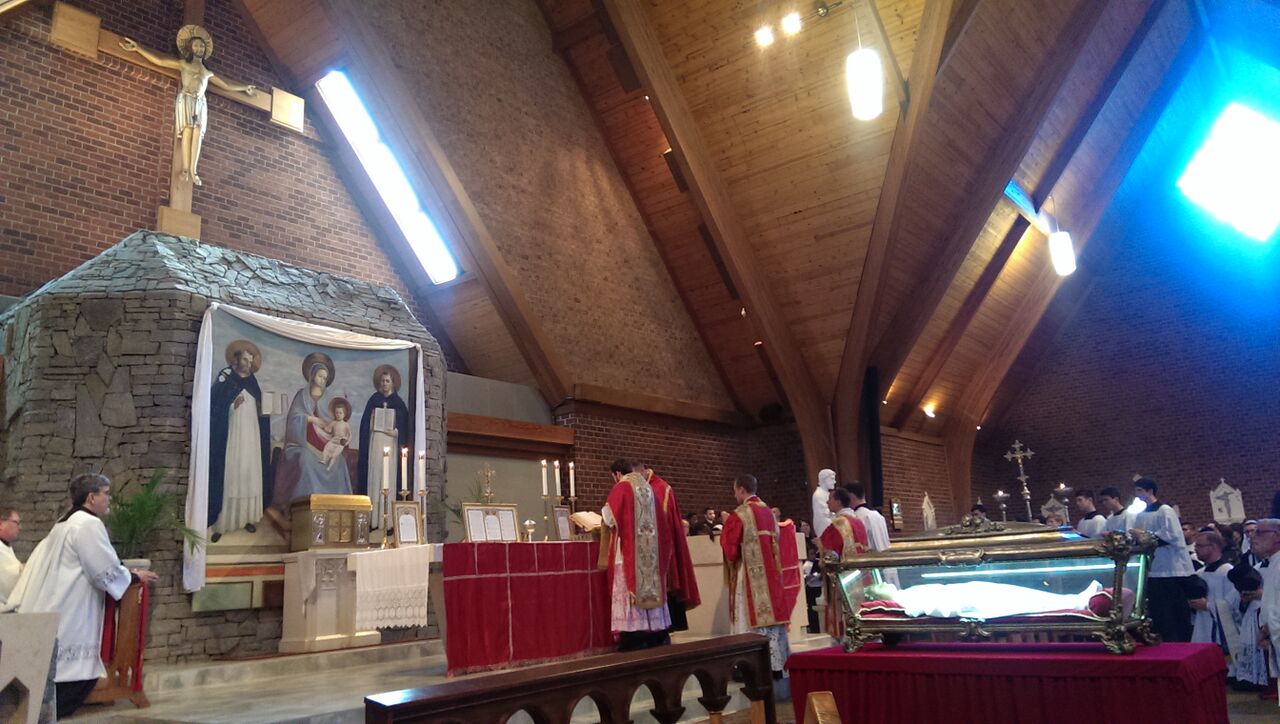 After Mass, waves of pilgrims lined up to venerate her relics throughout the day. Young men and women with their friends, organized groups from distant parishes, families with their children, clergy, religious sisters, the elderly, and the disabled all waited to touch their sacramentals to her glass casket and to ask for her intercession. 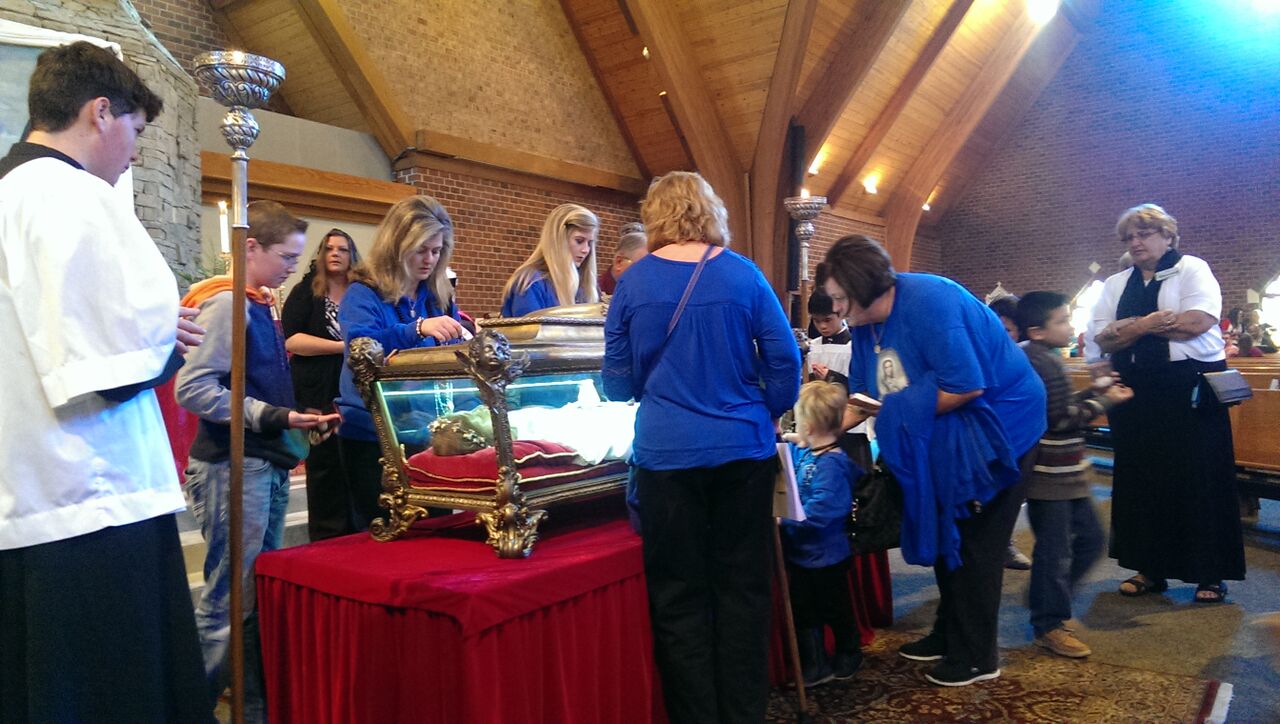 Also on display was an exhibit explaining the Catholic Church's teaching about relics and the communion of saints, as well as a looped video telling the detailed story of St. Maria Goretti's life on location in the places where she lived and died near Nettuno, Italy. 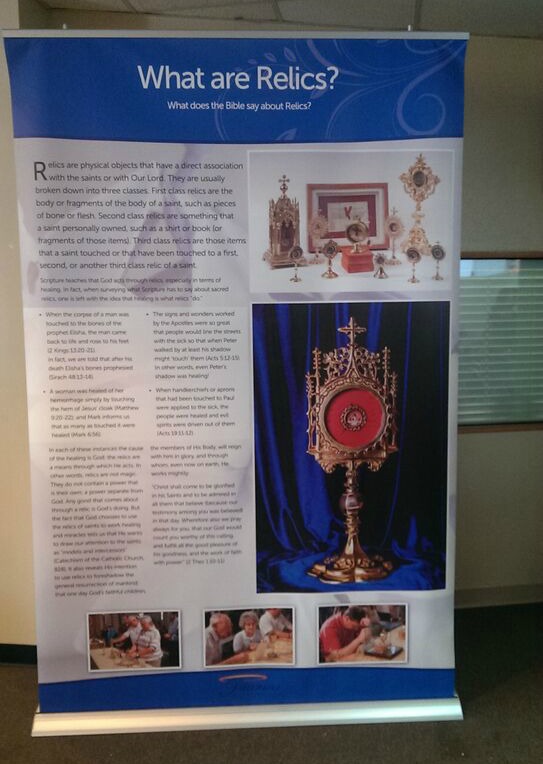 The event continued all through the night with pilgrims arriving even during the wee hours of the morning to visit and give honor to her relics. The closing Mass was at 7:30am on Sunday, October 25th, after which the relics were solemnly processed out and loaded back onto the tour bus to travel to her next destination. 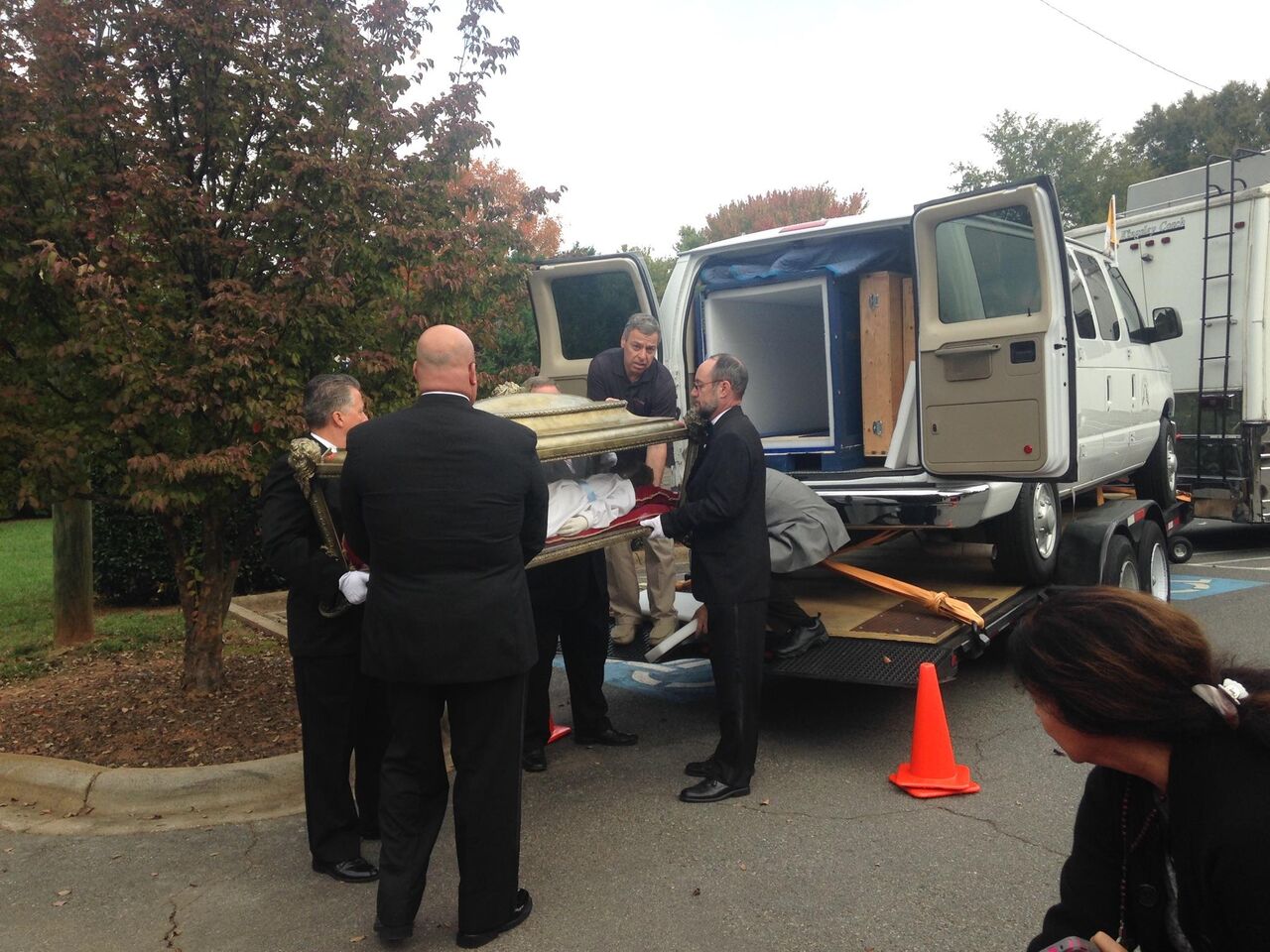 It was an extremely beautiful event to see such devotion and piety on display in celebration of one of the treasures of our Catholic faith. No doubt many hearts were led to deeper conversion to Jesus Christ through his "Little Saint of Great Mercy."

VIDEO HIGHLIGHTS FROM THE PILGRIMAGE OF MERCY IN CHARLOTTE

View stunning photos of the Latin Mass by photographer John Cosmas here and from the Charlotte Observer here. You can also view the write-up by the Catholic News Herald here. 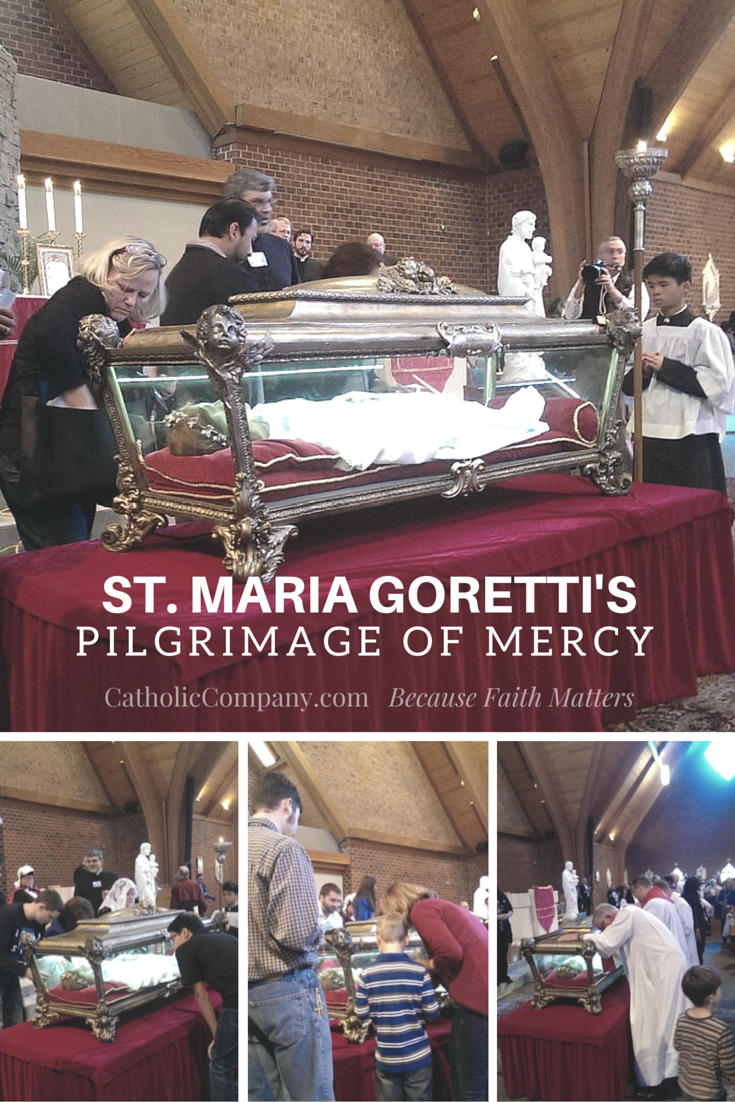