In our society the virtue of purity seems “old fashioned” or “prudish” to many. There is very little today that is considered scandalous. Sadly, our culture has mainstreamed many things that would have been considered improper, impure, and unacceptable in days gone by.

Bombarded with sexualized images and content for so long, people are now desensitized to impurity. Unfortunately, this includes our impressionable young girls and our maturing young women. They no longer recognize many inappropriate and obscene things as offensive.

The virtue of Purity consists of much more than sexuality, but as we strive to raise children and grandchildren whose values and convictions reflect the heart of God, representing sexual purity becomes more challenging every day. Especially against the backdrop of our disordered culture.

In a culture where impurity assaults us, the Church offers many models of virtue to us and to our young women. They stand in stark contrast to the feminine role models offered to us by the disordered world.

Here are the inspiring stories of four virgin-martyrs who suffered death rather than compromise their purity: 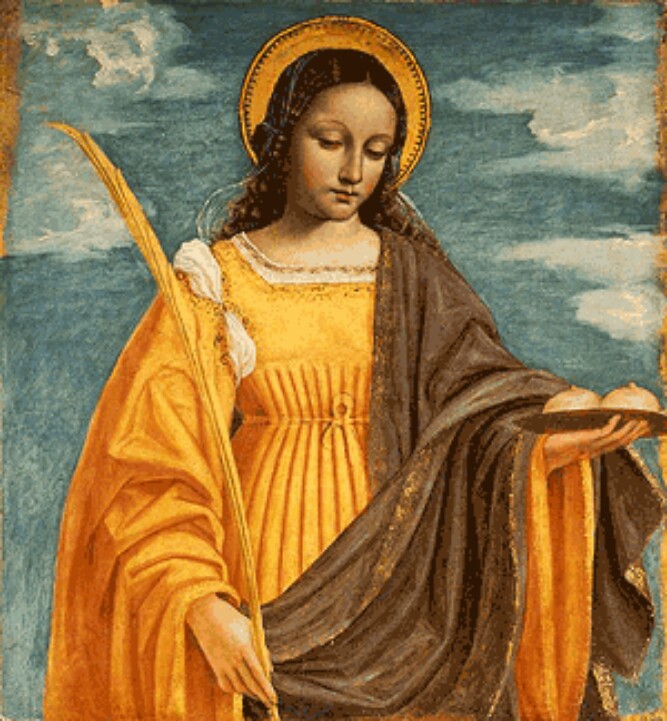 St. Agatha was a Sicilian girl from a rich and important family. When she was very young, she dedicated herself to God. As she aged and grew in beauty, she resisted the proposals of men who wanted to marry her. A Roman official desired to have relations with her. She refused him, and he had her arrested and imprisoned in a brothel, expecting her to change her mind and accept his advances.

She resisted his advances, and those of the men who lusted after her in the house of prostitution. She was abused there and when brought back before her spurned accuser, she would not consent to his desires, despite what she had suffered. He sent her to prison after various cruel tortures, including stretching her upon a rack, beating her, and severing off her breasts.

St. Peter is said to have appeared to her in prison, healed her wounds, and bathed her dungeon cell in light. When the angry official discovered her cured, it did not discourage him. She would not relent and compromise her purity. He then had her naked body rolled over hot coals and broken potshards. She prayed for God to receive her soul, and finally joined her Lord in eternity.

The information we have about her life comes from the early Church Fathers and from their accounts of martyrdom during the persecution. St. Agatha is one of few women mentioned in the Holy Sacrifice of the Mass. Her zeal for the Lord and the Faith, her heroic effort to maintain her purity for God alone, and her willingness to suffer so as not to be defiled are timeless messages for our young women today. 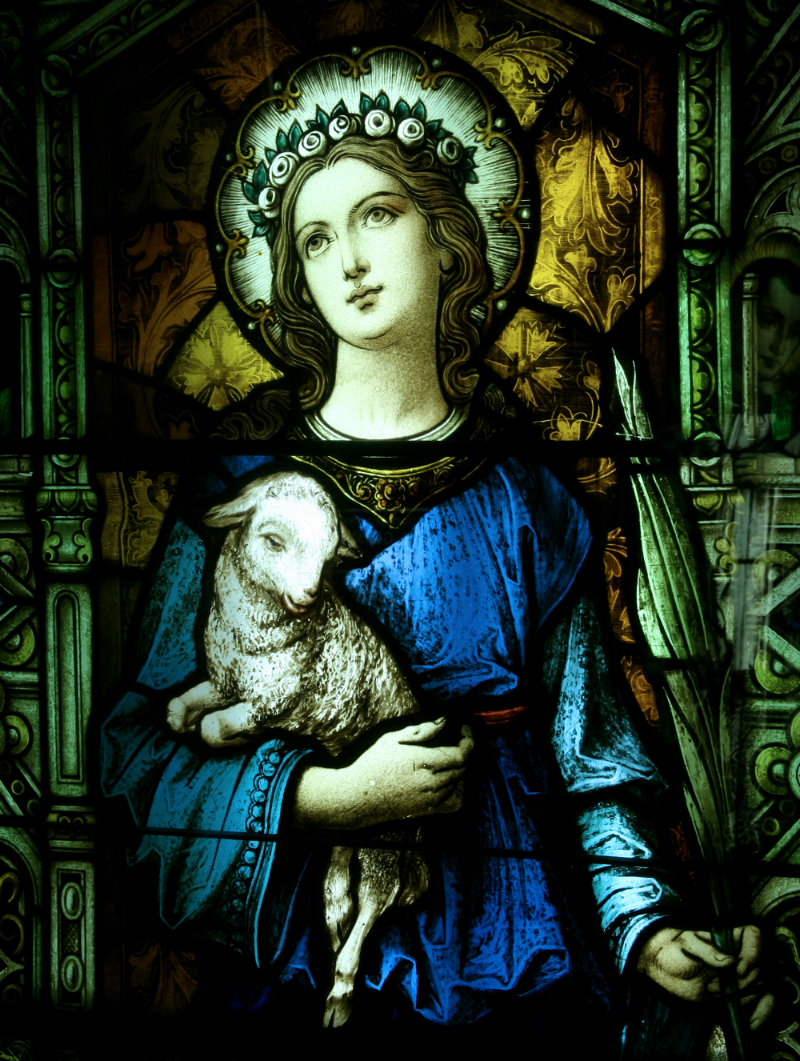 St. Agnes’ name is synonymous with purity and means “chaste, pure, or sacred” in Greek. Its Latin form means “lamb,” which symbolizes purity. She was the beautiful daughter of Roman nobility. She was raised as a Christian and had made a vow of perpetual virginity to God.

By age 12 or 13 she had many suitors of high rank. She turned down these proposals for marriage because of her vow. Several of the angry young men banded together to report her to the authorities during the persecution of the Christians.

She refused to renounce her faith and was sentenced to be dragged naked through the streets to a brothel, where she would be forced to sacrifice her virginity. When a young man who looked upon her lustfully was struck blind there, she was taken to be burned at the stake. According to early sources, the wood would not burn or the flames parted around her, and she was then beheaded.

Though there are no contemporary sources for the details of her life, many of the earliest Church Fathers mention her and her death in their writings. Through these, the few details we have of her virtue and purity take shape. She is also mentioned in the Roman Canon of the Mass and is the patroness of young girls, virgins, rape victims, engaged couples, and the Girl Scouts. 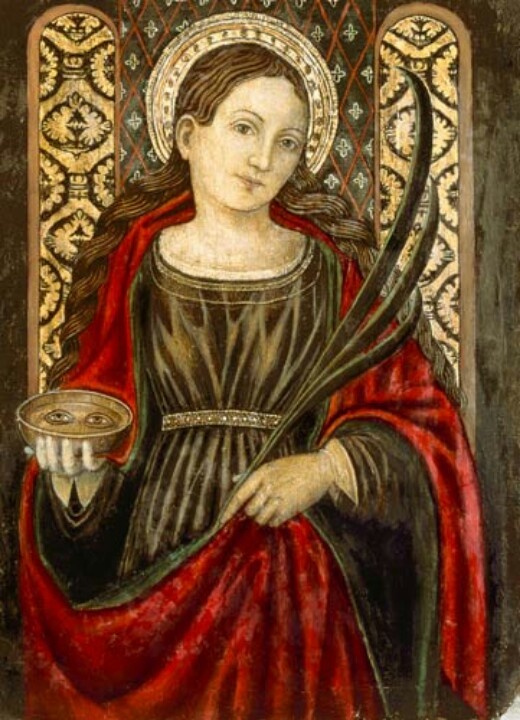 St. Lucy was a beautiful girl born to rich and noble parents in Sicily. Her Roman father died when she was five years of age. His death left Lucy and her mother without a protector or guardian during the violent persecution of the Christians.

Lucy consecrated herself to God in virginity, and wished to remain a virgin and distribute her considerable dowry among the poor. Unfortunately, her mother, who was very ill, arranged a marriage for Lucy out of fear for her daughter’s welfare. She was unaware of Lucy’s desire to remain a virgin.

The pagan nobleman Lucy’s mother chose for the marriage reported her to the authorities. She was tried by the Governor, and told she must burn a sacrifice to the image of the Emperor. When she refused, she was sentenced to live in a brothel where she would lose her virginity and be repeatedly defiled.

The early sources of her martyrdom state that when the guards came to take her away, they could not move her, even with a team of oxen. They tried to burn her at the stake but her body would not burn, and finally she was beheaded.

Later sources of her story state that before death, she foretold the punishment of the Governor who sentenced her, and the end of the Emperor and the persecution. This so enraged the Governor that he had her eyes gouged out.

St. Lucy is another one of few women mentioned in the Roman Canon of the Mass along with Our Lady. Her deep love for God despite the allurements of the world, and her desire to give herself totally to Him in keeping her promise, no matter what the earthly consequences are virtues to inspire young girls and women of today. 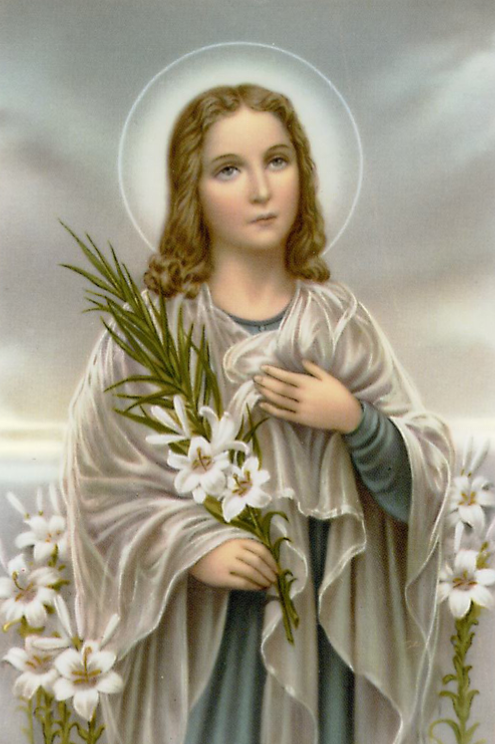 St. Maria Goretti was born to an Italian farming family that struggled in poverty even before her father died of malaria. Her widowed mother was forced to leave the younger children in Maria’s care while working the fields. One day while her baby sister slept, Maria was attacked by a farmhand obsessed with impure thoughts of her.

She cried out protesting his advances, “No, it is a sin! God does not want it!” and in his rage, her attacker stabbed her 14 times with a dagger in the throat, heart and lungs. Maria’s baby sister awoke, crying and causing Maria’s mother and the neighbors to come to the house.

They found Maria there. She underwent surgery without anesthesia at the nearest hospital, but doctors could do nothing to save her life. As she suffered, she meditated on the Passion of Christ, and saw clearly that as Our Lord forgave sinners, she was to forgive her attacker.

As she lay dying, she told her mother, “I too, pardon him, and I wish that he could come someday and join me in heaven.” She died peacefully the next day, not yet 12 years of age.

St. Maria Goretti’s attacker was sentenced to 30 years in prison. In the beginning, he slandered her constantly and attacked her character and purity in angry rage. Then Maria appeared to him in a dream, gathering lilies in a beautiful garden. Bathed in divine light, she turned to him and handed him the flowers.

He understood instantly that each lily was a wound he had inflicted upon her, and she forgave him completely. She repeated her dying wish that he join her in heaven. He was utterly transformed, became a man of deep faith and humility, and went to her mother upon his release to beg forgiveness.

The bereaved mother and the murderer received Communion together the following day. He spent the next 40 years in penance at a Capuchin monastery. He testified to Maria’s sanctity at her cause for canonization and was present, as was her family, when Maria was proclaimed a saint 1950.

She is perhaps the most well known and recent of the virgin martyrs and there are many contemporary accounts of her life and death.

Her humility, mercy and zeal for God and His kingdom give young women examples of the qualities that will allow God to work in their hearts and prepare them for holiness in this world and the next.

OUR ADVOCATES, THE SAINTS

It’s no wonder the Church desires us to know the saints! They are our brothers and sisters in this world and our advocates and intercessors in the next.

In Paul’s letter to the Hebrews he writes:

“Therefore, since we are surrounded by so great a cloud of witnesses, let us rid ourselves of every burden and sin that clings to us and persevere in running the race that lies before us . . . In your struggle against sin you have not yet resisted to the point of shedding blood.”

Most of us will never have to resist to the point of shedding blood. But these holy martyrs have done just that. They have so much to teach us in every age. Their heroic virtues shine brightly over the bridge of time.

These Virgin Martyrs illuminate the darkness of a disordered culture that has forgotten the importance and the meaning of purity. May their zeal be a reminder that purity is a treasure to be guarded and protected. 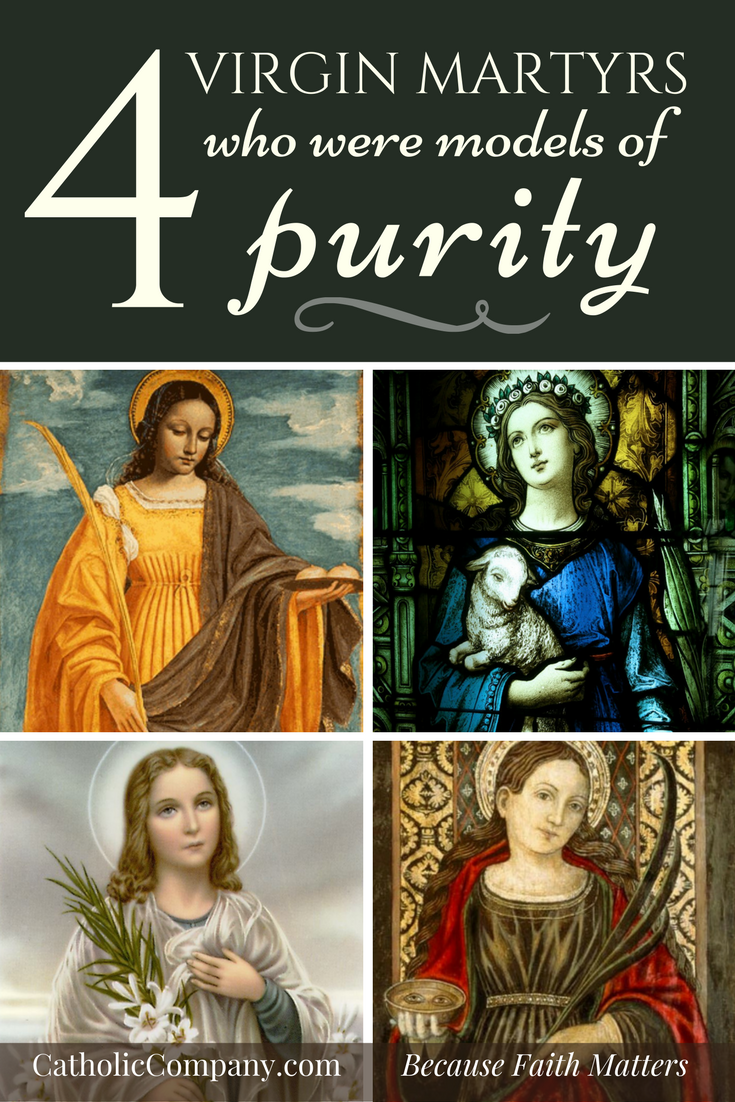 This was written by Cheryl Hadley, Secular Carmelite, in and was originally published in January 2012. © The Catholic Company. All rights reserved.