Most Catholics can rattle off a list of who they consider to be the ten most popular saints. The lists would vary, of course, but would most likely contain many of the same names.

There are some saints, however, who are so famous that they are known around the world—not only to Catholics, but to people of all beliefs (or no particular beliefs at all).

This is a beautiful example of how holiness draws souls who are fascinated by it, even if they don't understand why. And it reminds me of Matthew 5:16, which says, "Let your light so shine before men, that they may see your good works and give glory to your Father who is in heaven."

However, this widespread saintly fame can also cause confusion, so that some of us Catholics have muddled understandings of these holy men and women. We often associate them with causes and concepts that are misunderstood (at best) or simply inaccurate.

What to do? Well, we can always learn what the truth is, which will help us understand the misunderstandings.

Who are some of the most misunderstood saints in history? I've picked three, for the sake of this article.

Let's begin with the man who is, arguably, the most misunderstood saint of all time.

Popular portrayal: tree-hugging, world-peace-proclaiming saint with a pigeon on his shoulder 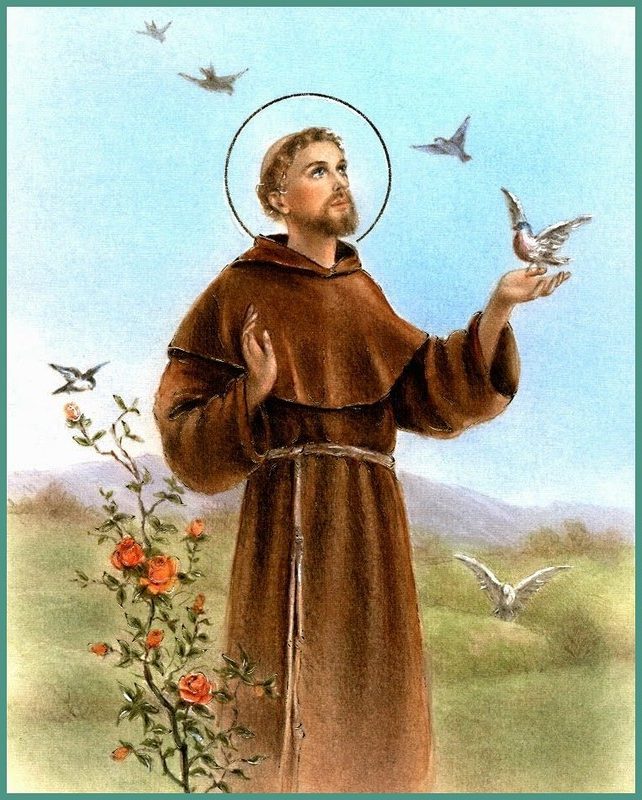 Reality: a converted man on fire with love for Christ and His creation, and the first-known saint to receive the stigmata 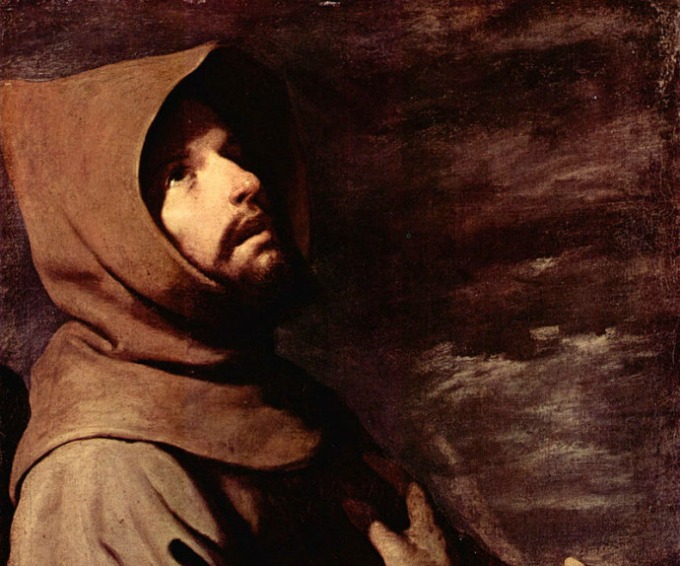 No doubt you're familiar with the basics of Saint Francis's life, but if you're interested in learning more about him, this article about il Poverello is very thorough.

Now, the first association that most people have with Saint Francis is "animals," and only secondly "poverty."

What's beautiful about him, though, is that his love for God and truth was passionate and ferocious. He was more real, more alive, than the typical image that is usually presented. He had a magnetic effect on those who met him.

He challenged others, but was hardest on himself. He was penitential, deeply ascetic, and very austere.

He was known to spend entire nights in prayer, so lost in awe of God that the only words that came from him were "Deus meus et omnia," which means "My God and my all." 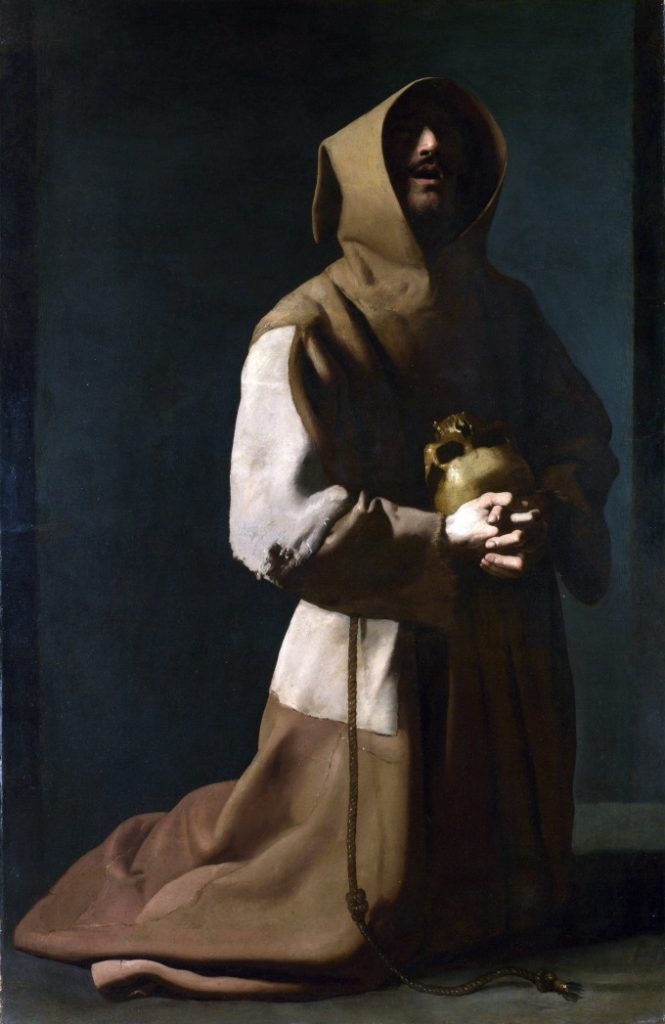 It is true, of course, that Francis loved animals and all of creation; but it's important to remember that he loved them in a very different way than the world does.

In the book A Priest Answers 27 Questions You Never Thought to Ask, Father Michael Kerper writes:

We learn about the approach of Saint Francis [to animals] primarily from Saint Bonaventure...the greatest of all Franciscan theologians...Saint Bonaventure wrote that Saint Francis loved animals mainly because they reminded him of God, their true origin, not because of cuteness or friendliness toward humans. For Saint Francis, animals were 'sacramentals,' whose mere existence innocently and unconsciously pointed toward God.

...Whenever [Francis] saw a little lamb he immediately thought of Christ, the Lamb of God sacrificed for the salvation of all humanity. Seeing a lamb became an inspiration for prayer and contemplation. His love for lambs was so intense that Saint Francis once cursed a vicious old sow who killed a newborn lamb. After grieving for the dead lamb, Saint Francis said, 'Alas, brother lamb, innocent animal, you represent Christ to me. A curse on that impious beast that killed you; may no man or beast ever eat of her!' Saint Bonaventure reported that the sow died three days later after an excruciating illness. Even Saint Francis had favorites—and disliked nasty animals.

Although the patron saint of pets, Saint Francis never kept animals as personal possessions; his strict vow of poverty precluded ownership of anything, including pets...people often presented animals to Saint Francis as gifts...[but] after spending some time with them, Saint Francis inevitably encouraged them to return to their natural habitat....In keeping with authentic Franciscan spirituality, which Pope Francis certainly shares, we must always respect and cherish animals...as wondrous reflections of God's loving and creative power. But we must also recognize that our responsibility to human beings, who are created in God's image and likeness, always trumps our concern for any animals, who are only faint reflections of God's glory. This is the message of the Holy Father—and Saint Francis.

I understand it is common among Franciscan religious to refer to the sentimental portrayals of Saint Francis as "the bird-bath St. Francis." They realize that there is so much more to Saint Francis than a strictly earthly concern for environmentals. Francis knew that we ought to care for creation because it is a gift from God that can aid us in our journey to Life Eternal, as we look forward to the New Heaven and Earth that await us at the Final Resurrection. 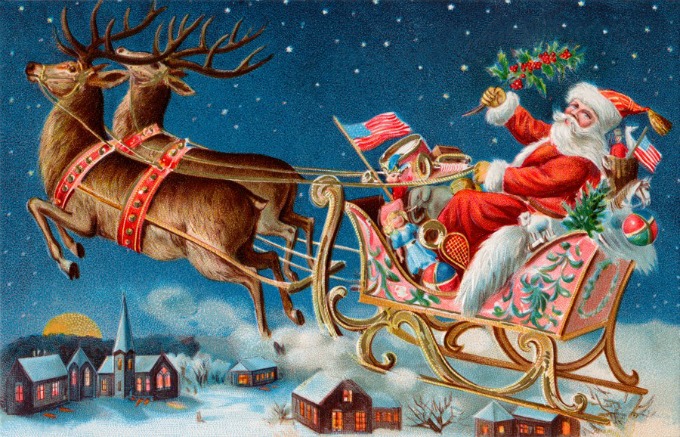 Reality: the Bishop of Myra, a holy, courageous man who was reputed to raise people from the dead, and who worked so many miracles that he is called "Wonder-Worker" 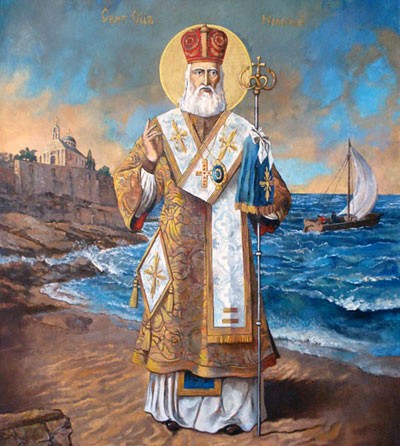 The popular idea of Santa Claus does not exist without reason. The Santa figure we know today was derived from a real man: St. Nicholas of Myra. He lived quite a long time ago: he was born March 15th, in the year 270, and died December 6th, 343. We don't know as much about him as we'd like, but we do have some impressive facts for a man who lived so long ago. We know, for example, from the examination of his skeletal remains that he was 5'6" tall and had a broken nose. (We don't know why his nose was broken.)

Since he was a bishop and a celibate, there is no Mrs. Claus. (Sorry, folks!)

Nicholas was one of the bishops present at the Council of Nicea in 325, from which the Nicene Creed takes its name. There's quite a story from that council: apparently Nicholas was so upset by the heretical views propounded by Arius that he walked up to him and slapped his face! The other bishops, appalled, confiscated his bishop's vestments and placed him in prison. (Nicholas was ashamed for his fit of temper and desired forgiveness.) Jesus and the Blessed Mother came to visit him in the prison cell—so when the guards came in later, they found Nicholas unchained, wearing his liturgical stole (given to him by Mary) and quietly reading the Scriptures. 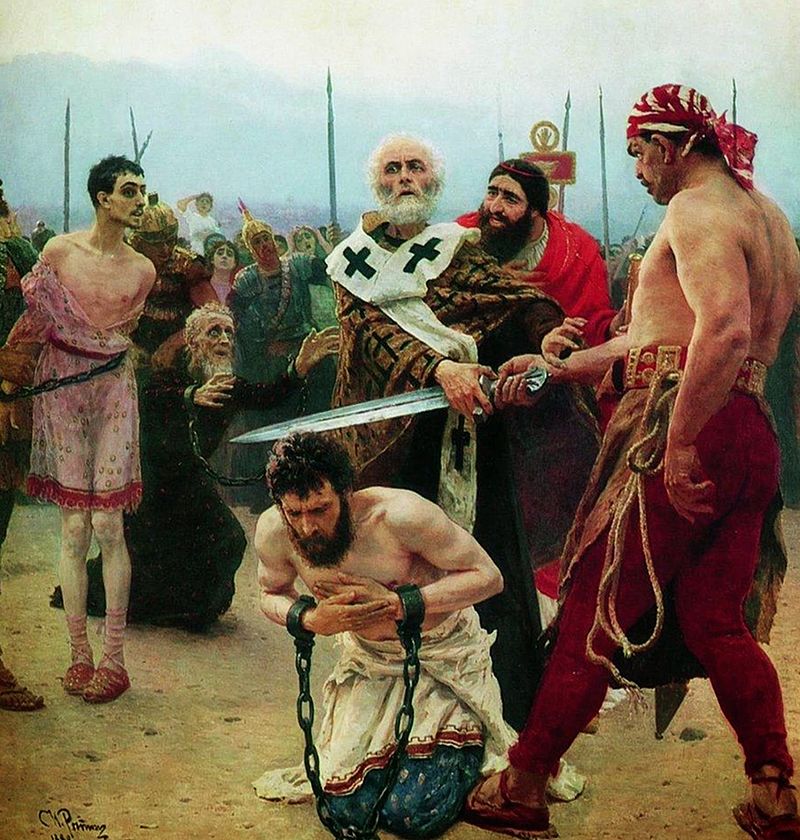 There are amazing traditions regarding his life that have been consistently told over the years. The most well known was his generosity to a man whose three daughters could not afford the dowry needed to marry. When Nicholas heard of this, he tried to secretly leave three bags of gold at their home, so that the women could be eligible to marry and not be forced into prostitution by their poverty. Their father discovered him attempting to leave the money, and tried to praise Nicholas; but the saint simply replied that all the glory should go to God.

There is much to learn about him. If you want to further discover the real St. Nicholas, you might want to watch this film and peruse this site.

If you want to find a way to help children discover the real meaning of Christmas, the Kneeling Santa figures are a beautiful way to teach kids to keep the focus on Christ! 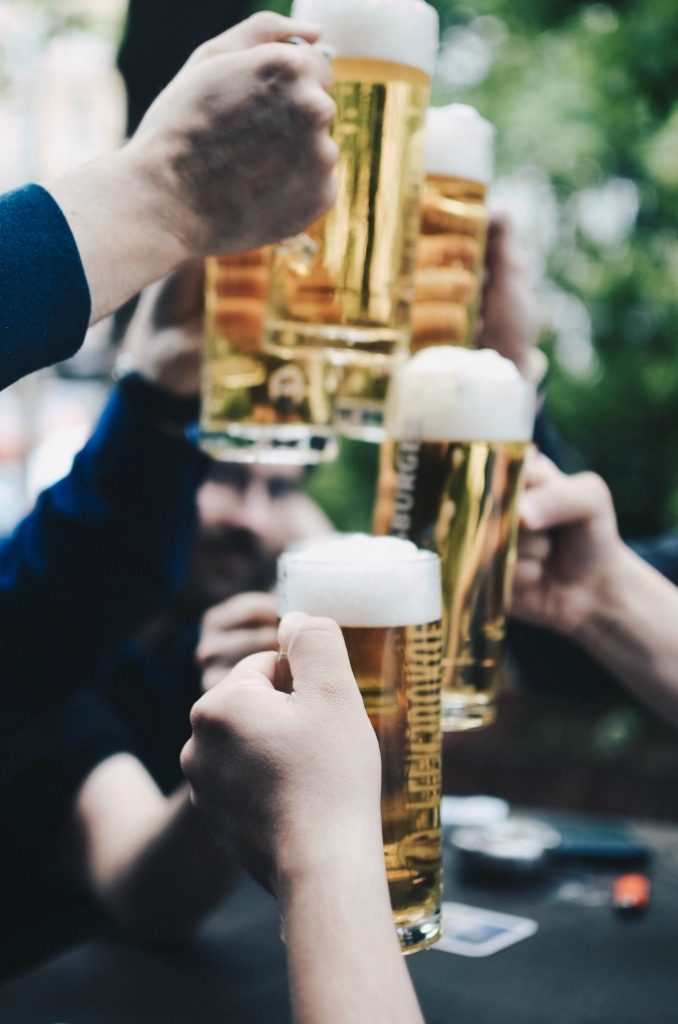 Reality: a Romano-British bishop and missionary who brought Christ to the Irish people that enslaved him 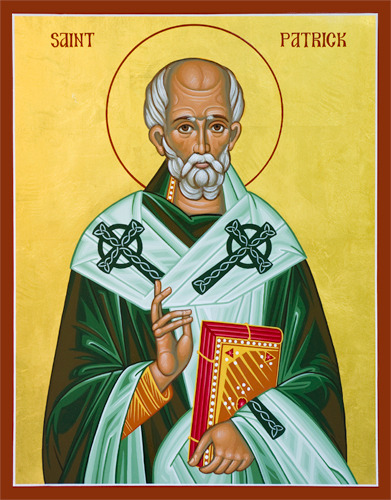 Known as the Apostle of Ireland, we still have his writings today. His autobiography can be found in the Confession of St. Patrick.

I am Patrick, yes a sinner and indeed untaught; yet I am established here in Ireland where I profess myself bishop. I am certain in my heart that 'all that I am,' I have received from God. So I live among barbarous tribes, a stranger and exile for the love of God...I speak out too for love of my neighbors who are my only sons; for them I gave up my home country, my parents and even pushing my own life to the brink of death. If I have any worth, it is to live my life for God so as to teach these peoples; even though some of them still look down on me.

His life is better than the movies. When he was sixteen, he was kidnapped by Irish pirates from Britain, his native country. Made a slave by the pagan Irish, he worked as a shepherd for six years before escaping and returning to Britain. Apparently he was not particularly devout before his captivity; but during that time, his spiritual life grew, as did his dependence on God.

After his return home, he continued to study the Christian faith. He had a vision a few years after his return, of which he writes:

I saw a man coming, as it were from Ireland. His name was Victoricus, and he carried many letters, and he gave me one of them. I read the heading: 'The Voice of the Irish'. As I began the letter, I imagined in that moment that I heard the voice of those very people who were near the wood of Foclut, which is beside the western sea—and they cried out, as with one voice: 'We appeal to you, holy servant boy, to come and walk among us.'

Responding to the vision with faith and incredible courage, Patrick returned to Ireland as a missionary after being ordained a priest. He then spent all of his strength, and all of his life, in bringing Christ to the pagan people there. He suffered numerous hardships and dangers for the Gospel, just like St. Paul. 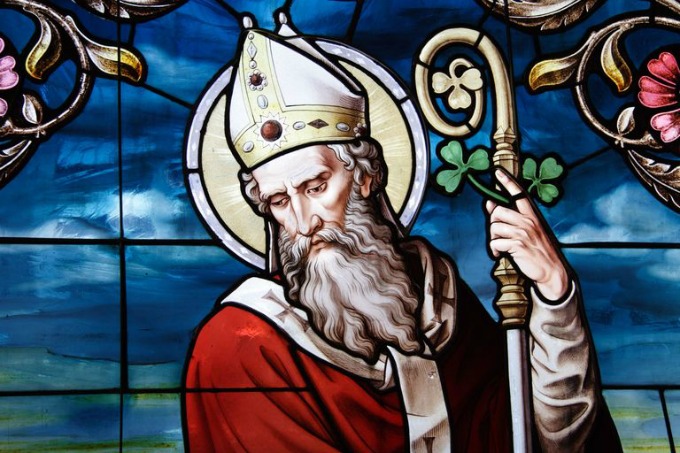 "I cannot keep silent, nor would it be proper, so many favours and graces
has the Lord deigned to bestow on me in the land of my captivity."
—St. Patrick

Despite the obstacles, he saw the Catholic faith take strong root in the hearts of the Irish people. Many of the men and women became monks and nuns; the sons of Irish chieftains became devout Christians. Patrick writes:

Never before did they know of God except to serve idols and unclean things. But now, they have become the people of the Lord, and are called children of God. The sons and daughters of the leaders of the Irish are seen to be monks and virgins of Christ!

St. Patrick is believed to have died March 17th, which is why the Catholic Church celebrates his feast on that day.

Truth is stranger than fiction...

The best stories are the real ones, don't you think?

Salvation History, which culminated in the most amazing true story of all (the Son of God taking human flesh to rescue His bride, the Church and all souls, from eternal death) is only unexciting to us because it seems so familiar. We've heard it before, and therefore might feel that it's not the most astounding event to have taken place. But it really is a more crazy story than anything we could have invented on our own.

In a similar way, the lives of the saints don't need a thousand modern interpretations or embellishment. The saints themselves certainly don't want to be misunderstood!

Whenever you have a question about any saint and the things said about them, do some quick research. It might take a little sifting to find reliable sources online, but there's a wealth of solid information out there.

In time, perhaps, there will be fewer misunderstandings of the saints who are so beloved to us.

What other saints do you think are commonly misunderstood or misrepresented? 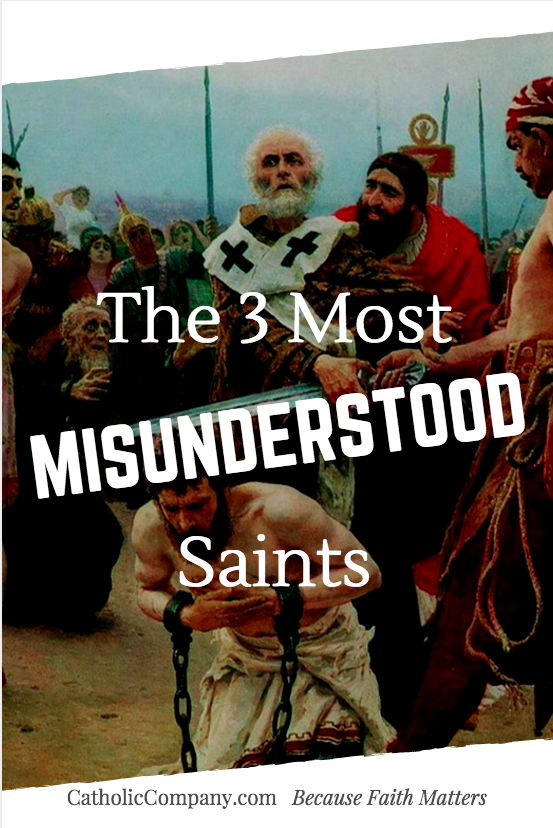