Did you know that there is a tradition among the Catholic faithful that St. Joseph was bodily assumed into heaven?

While not a solemnly defined dogma of the Catholic Faith as is the case with the Assumption of the Blessed Virgin Mary, it is a piously-held belief that St. Joseph, as a reward for the faithful fulfillment of his duties as the guardian and protector of the Holy Family, did not have to wait until the Second Coming of Christ to have his soul reunited to his body.

Since the beginning of the Church, Christians have venerated the relics of deceased saints and built churches over the tombs holding their bones. We have first-class relics of the Apostles and many other prominent figures of the early Church; however, first-class relics ascribed to the earthly father of Jesus are conspicuously non-existent. Just as the lack of bones belonging to the Mother of God points to the truth of her bodily Assumption, it likewise lends credibility to the belief in the assumption of St. Joseph.

Read next This Prayer to St. Joseph Dates to 50 A.D.

The last we read of St. Joseph in Sacred Scripture is the account of him finding the lost Jesus in the Jerusalem temple. According to widely-held belief, St. Joseph died sometime prior to Jesus' public ministry. Because Our Lord and the Blessed Virgin were certainly by his side at the time of his passing into eternal life, St. Joseph is the perfect example and patron of a happy and holy death.

It is piously believed that the physical body of St. Joseph was then resurrected and assumed into heaven. This belief was held by many saints, most notably St. Francis de Sales, Doctor of the Church,

"We can never for a moment doubt that this glorious Saint has great influence in heaven with Him Who raised him there in body and in soul—a fact which is the more probable because we have no relic of that body left to us here below! Indeed, it seems to me that no one can doubt this as a truth, for how could He Who had been so obedient to St. Joseph, all through His life, refuse him this grace? . . .

And if it is true, as we are bound to believe, that in virtue of the Blessed Sacrament which we receive, our bodies will come to life again in the day of judgment, how could we doubt that Our Lord raised up to heaven, in body and soul, the glorious St. Joseph? For he had the honor and the grace of carrying Him so often in his blessed arms, those arms in which Our Lord took so much pleasure. Oh, how many and what tender kisses His sacred lips bestowed on him, to reward him for his toil and labors! St. Joseph is, then, undoubtedly in heaven in body and soul.

Oh, how happy shall we be if we can merit a share in his holy intercession! For nothing will be refused to him either by Our Lady or by her glorious Son. If we have confidence in him, he will obtain for us growth in all virtues, but especially in those which, as we have seen, he possesses in a higher degree than any other man."

It is not known exactly when the body of St. Joseph was taken up into heaven, but most likely it was soon after Christ's Resurrection or Ascension. Some believe that St. Joseph was among the saints who miraculously rose from the grave as a witness to the resurrection of Jesus, as recounted in St. Matthew's Gospel:

"Many bodies of the saints who had fallen asleep arose; and coming forth out of the tombs after His resurrection, they came into the holy city and appeared to many."

Although it is not an article of the Catholic faith, Pope St. John XXIII made the statement that the assumption of St. Joseph is worthy of belief. Yet, this traditional belief is not widely known or held today. Perhaps St. Joseph's appearance in the sky at Fatima is meant to reignite this belief among the faithful so that we will better understand what a powerful intercessor he is for us—especially for fatherhood, the family, and a model of authentic masculinity, all of which have been so decimated in modern culture.

It is entirely fitting that the Holy Family, so closely united on earth—both spiritually and physically—is presently united in the same way in heaven.

At the final apparition of Our Lady of Fatima on October 13, 1917, a crowd of over 70,000 people witnessed the astonishing solar phenomenon known as the Miracle of the Sun. As the frightened crowd witnessed the sun whirling in the sky before it appeared to crash down to the earth, the three Fatima visionaries—Lucia, Jacinta, and Francisco—saw Our Lady just as they had during her prior five appearances at the Cova da Iria. However, on this final visit she brought guests: Jesus and St. Joseph.

Join a 30-Day Content Series Unpacking the Messages of Fatima

The visit of St. Joseph was pre-announced by Our Lady of Fatima at her fifth apparition on September 13th. She said to the children,

“In the last month, in October, I shall perform a miracle so that all may believe in My apparition . . . Saint Joseph will come with the Baby Jesus to give peace to the world. Our Lord also will come to bless the people."

In the Fatima apparitions, the three children did not see Our Lady as in a vision; the Blessed Mother came in bodily form and rested her feet on the top of a small holmoak bush. Witnesses observed the branches lightly bend under her weight even though they could not see her as the children could. Likewise, Our Lady's words that St. Joseph and Jesus "will come" seems to indicate that the children would see them in their physical bodies and not as a mystical vision. This is how Sr. Lucia described seeing St. Joseph during the Miracle of the Sun:

"Then opening her hands, she made them reflect on the sun, and as she ascended, the reflection of her light continued to be projected on the sun itself . . . After Our Lady had disappeared into the immense distance of the firmament, we beheld St. Joseph with the Child Jesus and Our Lady robed in white with a blue mantle, beside the sun. St. Joseph and the Child Jesus appeared to bless the world, for they traced the Sign of the Cross with their hands. When a little later, this apparition disappeared I saw Our Lord and Our Lady . . . Our Lord appeared to bless the world in the same manner as St. Joseph had done.”

Our Lady said that St. Joseph would come for the final Fatima apparition "to give peace to the world," and he was seen to bless the world by making the Sign of the Cross over it. St. Joseph is the patron saint of fathers and families, and he is the guardian and protector of the Catholic Church. What is the significance of his appearance at Fatima? Continue reading: What We Can Learn From the Apparition of St. Joseph at Fatima. 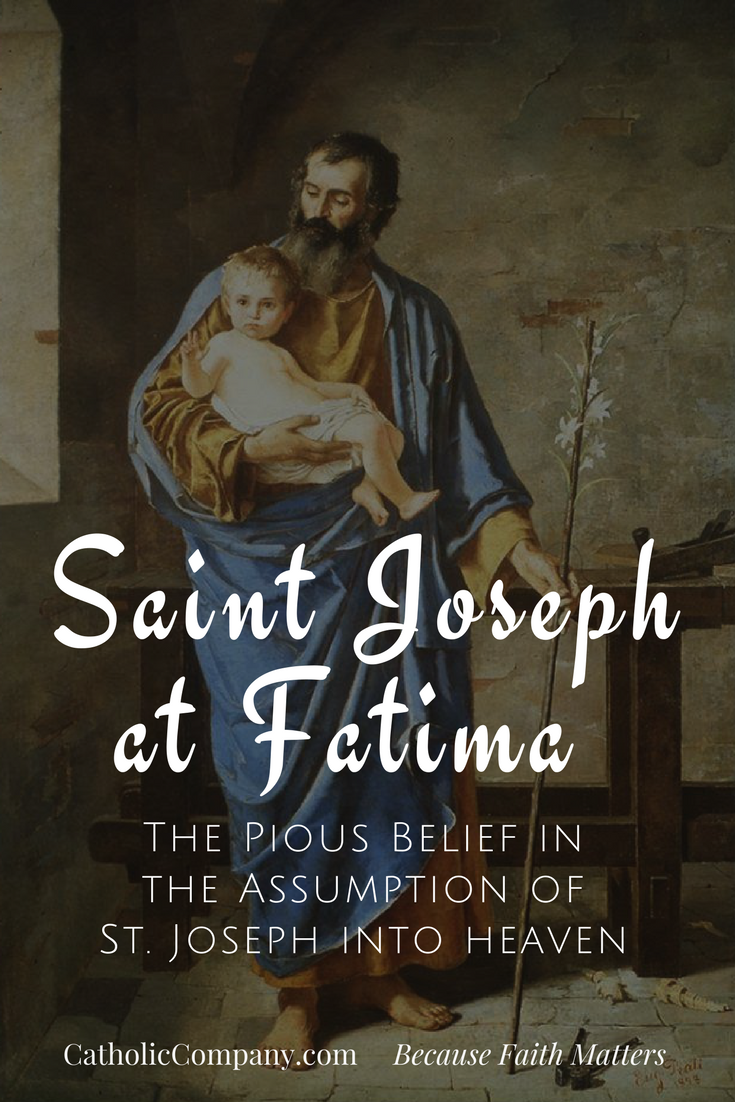