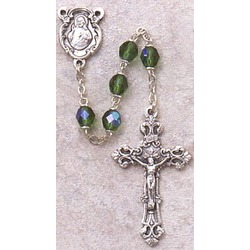 The August birthstone is peridot, also known as the “poor man’s emerald.”  It is one of the only gems that only comes in one color; in this case, the color is a sparkling, bright green with an almost lime colored tint.

Peridot has many properties which ancient peoples believed brought its wearers love, truth, fame, dignity, protection, and openness. In addition, peridots were given to those who suffered from nightmares. This gem was considered particularly precious in Egypt, and even now it is the country's national jewel.

Conveying both serious and humorous beliefs in the properties of gems, a popular August birthstone poem warns:

“Wear a Peridot or for thee,

The August born without this stone,

In both secular and Christian traditions, the color green represents renewal of life and growth. Biblical evidence suggests that peridot was one of the stones in the High Priest's breastplate (Exodus 28:17). Interestingly, "peridot" is also the same word used to describe the second stone God created to decorate Lucifer (Ezekiel 28:13). As Lucifer began as one of the highest angels of light, this makes receiving this precious gem a marked honor!

The peridot is clearly beautiful and full of rich history.   If you your loved one is August-born, then perhaps they would love to have an August birthstone rosary.  The August birthstone rosary combines the beautiful color of the peridot with devotion to Our Lady through the rosary.  Green in the Bible tends to symbolize new life and vitality, which makes the stunning lime green of such a rosary a reminder to pray for the livelihood and continual spiritual growth of your loved ones!  If you would to learn more about birthstone rosaries and birthstones, you can refer to the Birthstone Rosaries Guide.

This article has been updated and was originally published in August 2012. © The Catholic Company. All rights reserved.