October 12th, in addition to being Columbus Day, is also the feast day of Our Lady of the Pillar, patroness of all Hispanic peoples. While not one of the most widely known titles of Our Lady, it is the oldest, and has a most fascinating story that you will be delighted to read.

Tradition has it that the Blessed Virgin Mary, sometime before  her bodily Assumption into heaven, appeared to the Apostle St. James the Elder while he was living and preaching in Spain.

The Story of Our Lady of the Pillar

After Pentecost, the 12 Apostles dispersed to preach the Gospel all over the world. St. James the Greater, on one of his apostolic journeys, preached in the Iberian Peninsula in modern-day Spain.

St. James was discouraged that the pagans of that land were not responding to the Gospel and converting to Christianity. He had only a handful of converts to show for his labors. In the face of what he thought was failure in his mission, he prayed with his disciples by the Ebro river in modern day Zaragoza.

To bring him consolation, while she was still alive and living in Jerusalem, Our Lady appeared to him and his disciples atop a pillar of jasper stone carried by angels, while holding a smaller wooden statue of herself holding the Christ Child. The date was October 12 in the year 40 AD.

According to one account, Our Lady had previously promised St. James that she would come to his aid when he needed it the most. In fact, it was she who sent James into that region of the Roman Empire to tell the people of Hispania about her Son, Jesus. And then, in his most desolate hour, when he was considering leaving his mission field, she comes to his rescue. 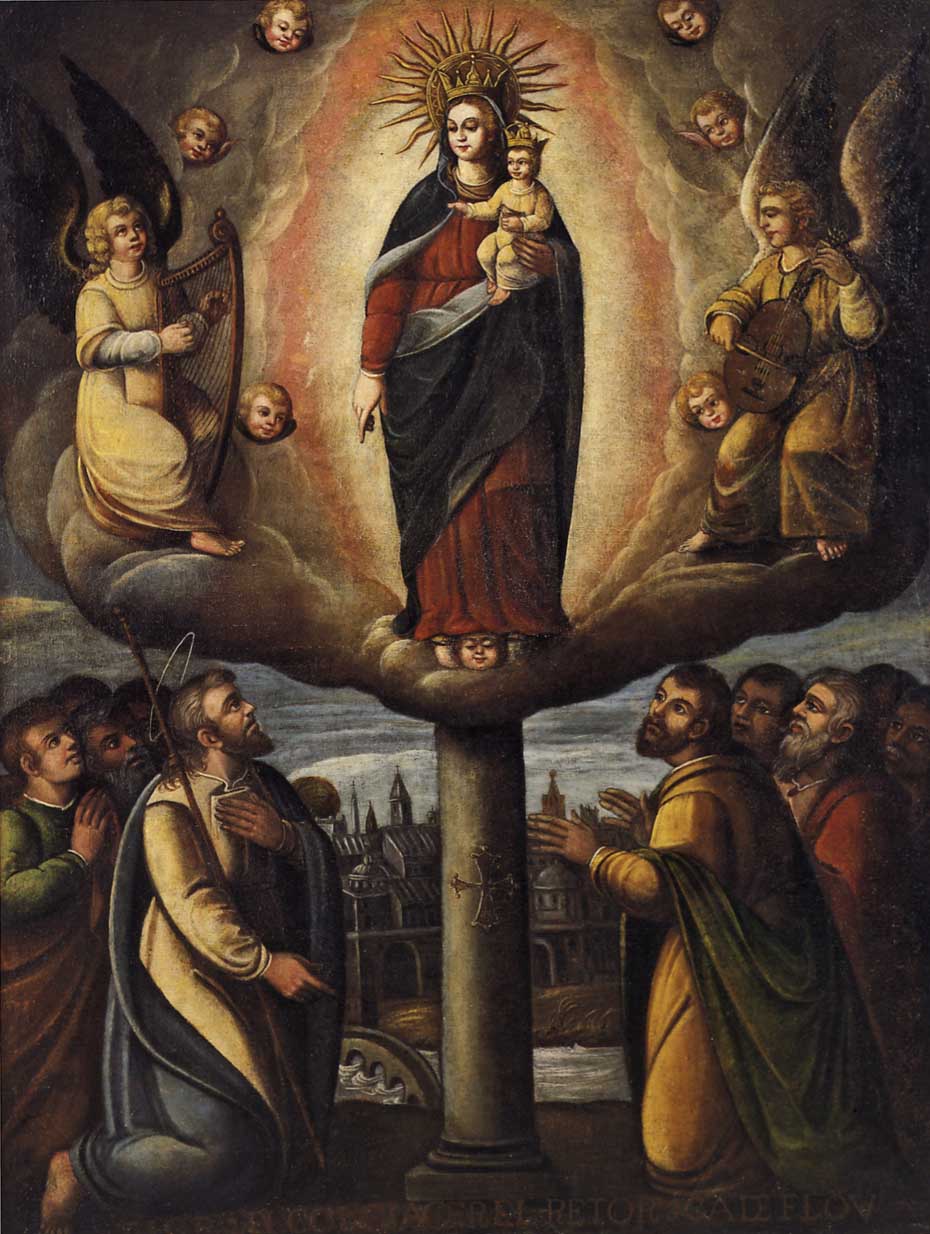 The Mother of God told St. James not to worry, that the people to whom he preached would not only be converted, but they would one day have faith as strong as the pillar on which she stood.

She gave the pillar and the statue to St. James and asked that a church be built on the spot in her honor, using the two items for the altar.

"This place is to be my house, and this image and column shall be the title and altar of the temple that you shall build... and the people of this land will honor greatly my Son Jesus."

After asking for her church to be built, she gave another promise that,

“It will stand from that moment until the end of time in order that God may work miracles and wonders through my intercession for all those who place themselves under my patronage.”

St. James built a small chapel as Our Lady requested, by the Ebro river in Zaragoza, Spain, the first known Marian shrine in history. It became known as Our Lady of the Pillar, or Nuestra Señora del Pilar.  The chapel was replaced by larger churches over the centuries, the present stunning basilica being erected in the 17th century.

The statue and pillar have been preserved in the basilica just as they were given to St. James almost 2000 years ago (see below photo). Amazing! The pillar is now covered in an embossed metal covering, but behind the altar a portion of the pillar is exposed for veneration. Click the image below to view a pilgrim's visit to this Marian shrine. (1)

In the same vision Our Lady also recalled St. James to Jerusalem, where he met his martyrdom in 44 AD. His remains were taken by his followers back to Compostela, Spain, where a chapel was built in his honor. The chapel was later replaced by the famous Santiago de Compostela Cathedral, the most visited Catholic pilgrimage destination outside of Rome and the Holy Land.

Have you been to the Basilica of Our Lady of the Pillar in Spain? If so, please comment below and tell us about your pilgrimage!

Christopher Columbus, the Italian Catholic explorer, sailed the Atlantic under the banner of the Catholic King and Queen of Spain on his three ships, the Nina ("Little Girl"), the Pinta ("Painted One"), and the Santa Maria ("Holy Mary"), which in hindsight can be seen as a foreshadowing of Our Lady of Guadalupe.

After going a long time without seeing land, Columbus promised his anxious crewman that if they did not have landfall in their sight by the October 12th feast of Our Lady of the Pillar, so dear to the Spanish people, they would turn course and sail back to Spain.

On October 12th they sighted land, and claimed the New World first for Jesus Christ, and next for the Spanish crown. Read The Catholic Venture of Christopher Columbus. Yes, America belongs to Our Lady!

Our Lady of the Pillar Fast Facts 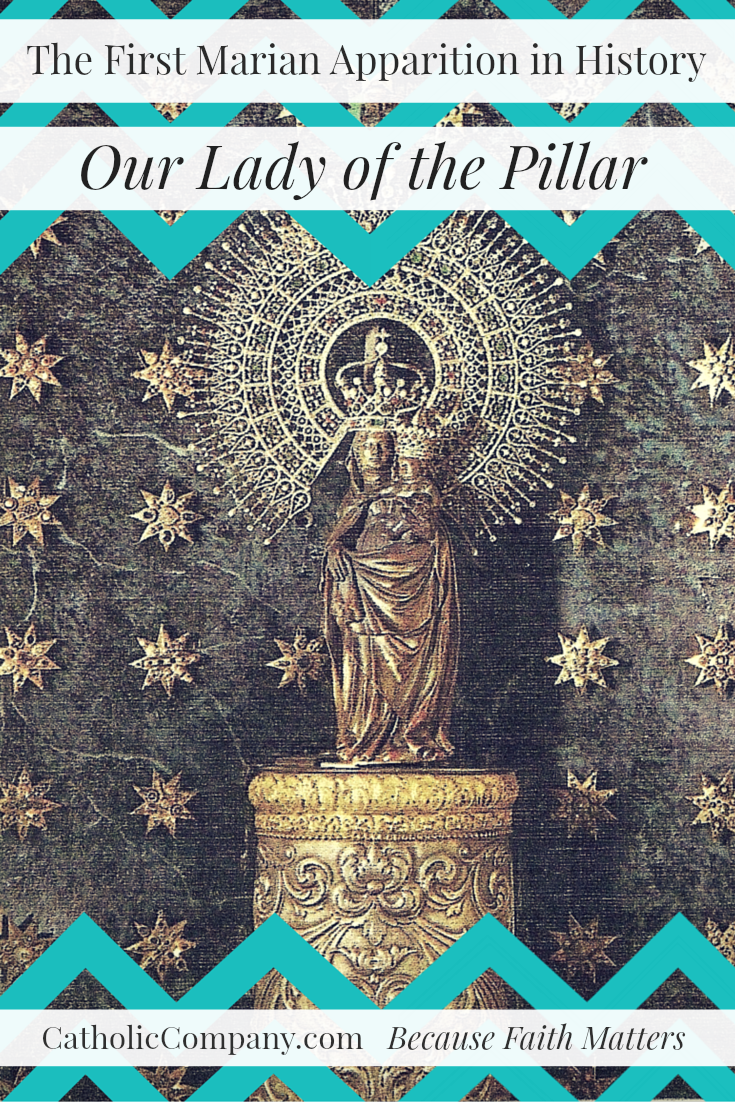 This article has been updated and was first published in October 2015. © The Catholic Company. All rights reserved.