One could argue that Pope Saint John Paul II is the most beloved saint of this century.

His life, however, had humble and quite tragic beginnings. By the age of twenty, Karol Josef Wojtyla had lost everyone he loved most deeply and was living on his own in Nazi-invaded Poland. But amidst great trials and suffering, Karol found much comfort and consolation in prayer.

Before he died, Karol Wojtyla Sr. expressed his son's grief in this way:

The violence of the blows which had struck him had opened up immense spiritual depth in him; his grief found its outlet in prayer.

The man who would become the successor of St. Peter survived bombings and harsh working conditions in chemical plants. He witnessed his soon-to-be brother priests tortured and eventually killed. He remembered asking himself this question while seeing his peers lose their lives: why not me? His own simple answer to this question was:

Amid the overwhelming evil of the war, everything in my own personal life was tending towards the good of my vocation.

During his Inaugural Mass on October 22, 1978, John Paul II declared the theme of his Pontificate:

Do not be afraid. Open wide the doors for Christ. To his saving power open the boundaries of States, economic and political systems, the vast fields of culture, civilization and development. Do not be afraid. Christ knows 'what is in man'. He alone knows it.

To commemorate his feast day, which is October 22, here is a list of the five great loves of Pope Saint John Paul II.

In the words of this great saint himself: "It is no secret that the Pope loves young people...and that he feels immensely happy in your company."

As a priest, Fr. Wojtyla devoted much of his pastoral ministry to youth and would often take them on camping trips. There they would join hands and gather around a campfire to sing and pray together. These camping trips would become the seeds of inspiration for World Youth Day.

Even as a bishop and a cardinal, Karol would be found with the youth, challenging them to seek greater things. He was even referred to as an eternal teenager, because of how well he got along with young people.

Young people saw "JPII" as being truly authentic and genuinely loving–which is what drew them to him.

He declared: "I believe in youth with all my heart and with all the strength of my conviction," and later said that young people were his comfort and strength.

As a priest, Fr. Karol developed a great love for human love. He was often criticized for his deep understanding and love for this, but he truly believed that love is not something that is simply given or something that just "happens"—rather it is a task given to man by God.

John Paul II knew that this human love applied not only to couples but to humanity as a whole. He said: "The human person is made in the image and likeness of God, and therefore the only adequate response to another person is love," (Saint John Paul the Great: His Five Loves).

Pope John Paul II also developed what we know today as Theology of the Body. Once again, this teaching not only spoke to the vocation of marriage but also to understanding what it means to be human. It is as simple as the call of love is stamped into man's anatomy. As John Paul explained:

From a very young age, Karol Wojtyla had a great love for prayer and the Blessed Sacrament. His entire life was deeply rooted in prayer.

John Paul II explained his love for the Eucharist in this way: "For me, the Mass constitutes the center of my life and my every day," and "Nothing means more to me or gives me greater joy than to celebrate Mass each day..."

The Pope loved communing with God in the wilderness. He would even sneak out, without his security guards' knowledge, so that he could be alone with God in the serenity of His creation.

However, his favorite place to pray was before the Blessed Sacrament. In fact, his great love for Jesus Christ would cause him to delay his schedule, which upset his assistants.

John Paul knew that the Eucharist was the greatest treasure the Catholic Church possesses.

Devotion to the Blessed Virgin Mary was an integral part of John Paul's spirituality.

The following year, he made a pilgrimage to Fatima, Portugal in thanksgiving for his survival, and gave the bullet to Our Lady. It was later placed in her crown, reminding all of us that she, our Mother, will protect us.

From the time he was a child, Karol embraced the power of redemptive suffering. "In the cross," he said, "lies Love's victory."

The cross is not only the measure of worth for man; it is also a reminder of man's calling. Suffering is not meant only to be accepted but also embraced in order for it to be victorious.

John Paul once said: "It is suffering, more than anything else, which clears the way for the grace which transforms human souls."

When we genuinely embrace suffering, it can be transformed into an act of intercession and awaken one's heart to the pain of others.

The life of John Paul was truly a witness to learning how to embrace suffering, which, in turn, creates compassion and mercy in one's heart–two things which he greatly possessed. Even until the hour of his death, Pope Saint John Paul II offered his suffering for others while also managing to have a lighthearted spirit.

Isn't it comforting to know that Karol Josef Wojtyla—Pope John Paul II—sits next to the Lord in heaven, rejoicing even as he prays and intercedes for us? 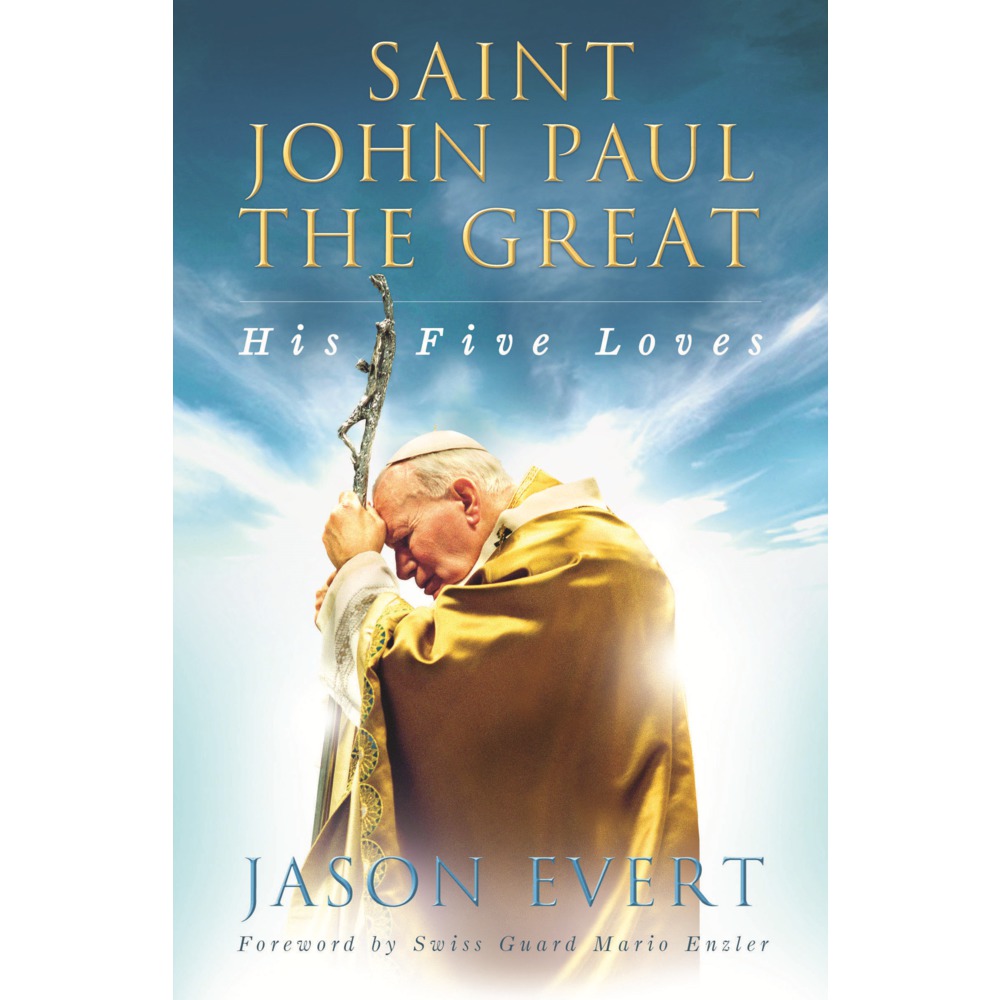 The information and inspiration for this article were taken from the book Saint John Paul the Great: His Five Loves by Jason Evert.

Do you have a special devotion to Pope Saint John Paul II or know someone who does? Click here to read more about this great saint and for 12 gifts ideas for JPII lovers.