One of the most beautiful and universal titles of the Blessed Virgin Mary is her title as Queen, honored on the August 22nd feast of the Queenship of Mary, the octave day of the feast of her Assumption. What does this mean, and what is the Church tradition on this doctrine of the Catholic Faith? Here is a primer on the profound spiritual mystery behind this Marian title.

See also Why does the Virgin Mary Have So Many Names, Titles, and Feasts?

WHAT HAPPENED WHEN MARY ENTERED HEAVEN

The Queenship of Mary is very closely associated with the dogma of her Assumption into heaven. Catholic Tradition holds that once Mary, the Mother of God was assumed into heaven at the end of her earthy life, she was then crowned as Queen of both Heaven and Earth to reign alongside her Son, the King. This is why the two events in Mary's life are side by side in the Glorious Mysteries of the Holy Rosary.

Pope John Paul II, in his apostolic letter Rosarium Virginis Mariae  writes of this Glorious Mystery of her Coronation:

“Christ was raised in glory to the right hand of the Father, while Mary herself would be raised to that same glory in the Assumption, enjoying beforehand, by a unique privilege, the destiny reserved for all the just at the resurrection of the dead. Crowned in glory – as she appears in the last glorious mystery – Mary shines forth as Queen of the Angels and Saints, the anticipation and the supreme realization of the eschatological state of the Church.”

Here we see that after the end of Mary's earthly life she was exalted even above the angels in heaven, having a unique privilege and place as the Mother of Jesus Christ, who is both fully God and fully man.

Mary's glory in heaven is a picture or foreshadowing for all Christians of the similar heavenly glory meant for those who share in her Son's passion, death, and resurrection. She received first, and in the most perfect way, that which is destined for all of us. 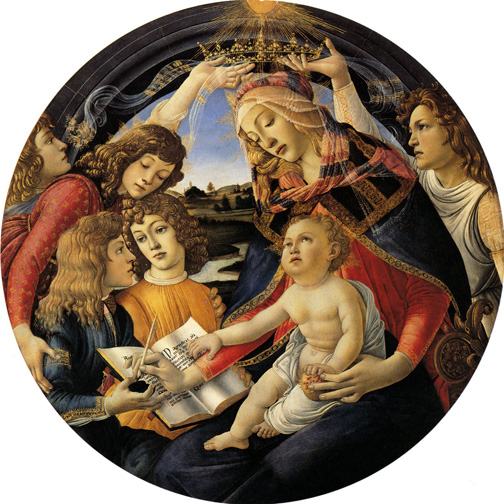 The doctrine of the Queenship of Mary is based in part on a vision given to St. John the Apostle (the disciple given to the care of Mary after Our Lord's death) that he writes about in the Book of Revelation 12:1-5. That text reads,

“And a great sign appeared in heaven: A woman clothed with the sun, and the moon under her feet, and on her head a crown of twelve stars: And being with child, she cried travailing in birth, and was in pain to be delivered. And there was seen another sign in heaven: and behold a great red dragon, having seven heads, and ten horns: and on his head seven diadems: And his tail drew the third part of the stars of heaven, and cast them to the earth: and the dragon stood before the woman who was ready to be delivered; that, when she should be delivered, he might devour her son. And she brought forth a man child, who was to rule all nations with an iron rod: and her son was taken up to God, and to his throne.”

The woman in this passage is Mary, and the child is her Son, Jesus Christ. Notice that in this passage Mary is wearing a crown of twelve stars, which is representative of the twelve tribes of Israel (her ancestry - in Israel's history, it was the mother of the king who reigned as queen) and the twelve Apostles (the foundation of the Church, who regarded her as Mother).

HER QUEENSHIP IN CHURCH TRADITION

In this life Mary shared in the Passion of Christ, and in heaven she shares in the Glory of Christ. This privilege of reigning with Christ is not meant for Mary alone, but she is our example in that all of us are intended to reign with Jesus in heaven, too. Mary has the special exalted place as Mother of Jesus and Mother of the Church, who helps the faithful journey to her Son.

There is a long tradition among the Church Fathers on the Queenship of Mary. St. Ephrem (4th century) referred to Mary as “Lady” and “Queen.” St. John Damascene (7th century) spoke beautifully of Mary in a sermon:

“We, too, approach thee to-day, O Queen; and again, I say, O Queen, O Virgin Mother of God, staying our souls with our trust in thee, as with a strong anchor.

Lifting up mind, soul and body, and all ourselves to thee, rejoicing in psalms and hymns and spiritual canticles, we reach through thee One who is beyond our reach on account of His Majesty.

Thus shall we best show our service to our Lord Himself . . . . Watch over us, O Queen, the dwelling-place of our Lord. Lead and govern all our ways as thou wilt. Save us from our sins.

Lead us into the calm harbour of the divine will. Make us worthy of future happiness through the sweet and face-to-face vision of the Word made flesh through thee. With Him, glory, praise, power, and majesty be to the Father and to the holy and life-giving Spirit, now and forever. Amen." 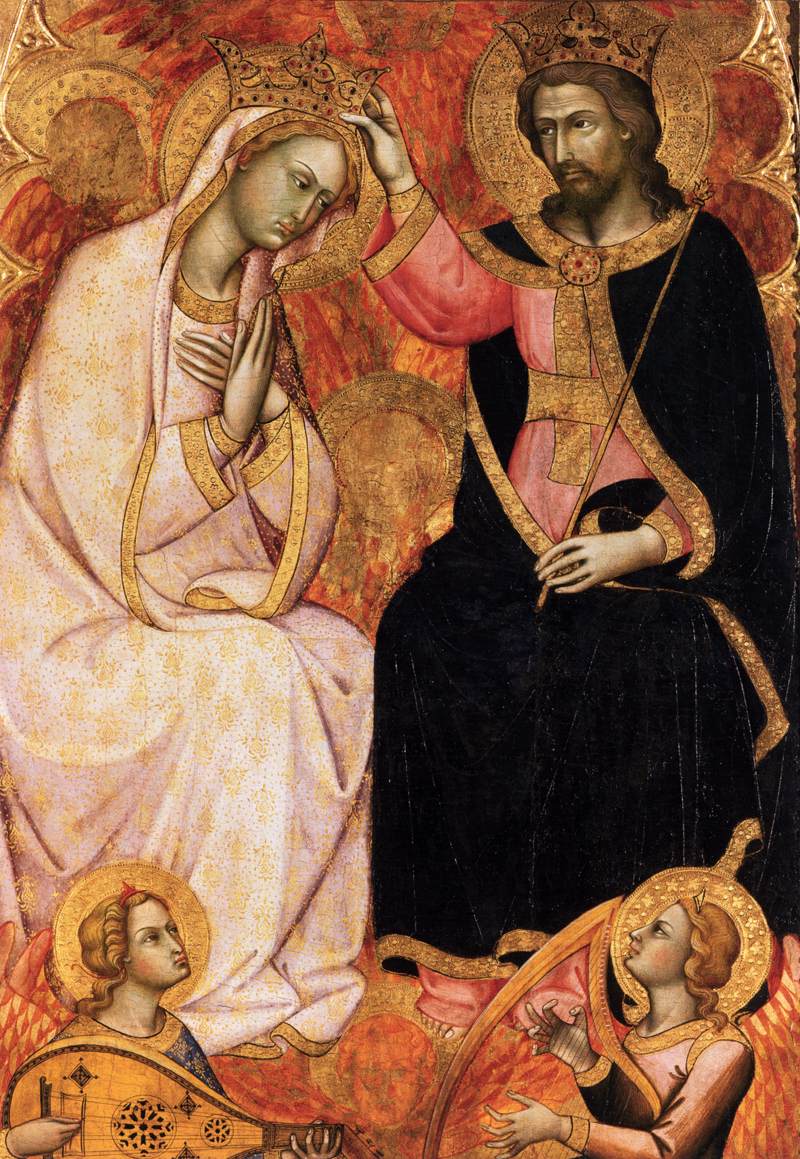 The Marian Hymns we know and love, such as “Hail, Holy Queen” and “Hail, Queen of Heaven”, were composed in the 11th to 13th centuries and extol her Queenship, as well as the prayers of the Dominican rosary and the Franciscan crown. Mary's litany (the Litany of Loreto) composed in the Middle Ages also extols her Queenship:

Queen of Angels, pray for us

Queen of Patriarchs, pray for us

Queen of Prophets, pray for us

Queen of Apostles, pray for us

Queen of Martyrs, pray for us

Queen of Confessors, pray for us

Queen of Virgins, pray for us

Queen of all Saints, pray for us

Queen conceived without original sin, pray for us

Queen of the most holy Rosary, pray for us

Queen of peace, pray for us

LESSONS FROM THE POPES

As noted earlier, the Queenship of Mary is closely related to the dogma of the Assumption. It was immediately after her Assumption into Heaven that the crowning took place.  The Assumption was declared dogma by Pope Pius XII in 1950.  Not surprisingly, only four years later in 1954 Pope Pius XII gave Mary the title Queen of Heaven in his encyclical Ad Caeli Reginam (On Proclaiming the Queenship of Mary) and instituted her feast day under this title to take place each year on August 22.

In this document he states:

“Jesus is King throughout all eternity by nature and by right of conquest: through Him, with Him, and subordinate to Him, Mary is Queen by grace, by divine relationship, by right of conquest, and by singular choice [of the Father]. And her kingdom is as vast as that of her Son and God, since nothing is excluded from her dominion."

The documents of the Second Vatican council reaffirm this doctrine. Lumen Gentium (Dogmatic Constitution on the Church) promulgated by Pope Paul VI in 1964, states:

“Let the entire body of the faithful pour forth persevering prayer to the Mother of God and Mother of men. Let them implore that she who aided the beginnings of the Church by her prayers may now, exalted as she is in heaven above all the saints and angels, intercede with her Son in the fellowship of all the saints. May she do so until all the peoples of the human family, whether they are honored with the name of Christian or whether they still do not know their Savior, are happily gathered together in peace and harmony into the one People of God, for the glory of the Most Holy and Undivided Trinity.”

So we see that the doctrine of Mary as Queen of Heaven and Earth was believed by the faithful all along in Church Tradition, with its roots in Sacred Scripture, its lauding in the Church Fathers and in the songs and praises of the Middle Ages, and its promulgation by modern Popes and Church councils.

Hopefully this short primer on the Queenship of Mary will encourage you to regard Mary as your Queen too! 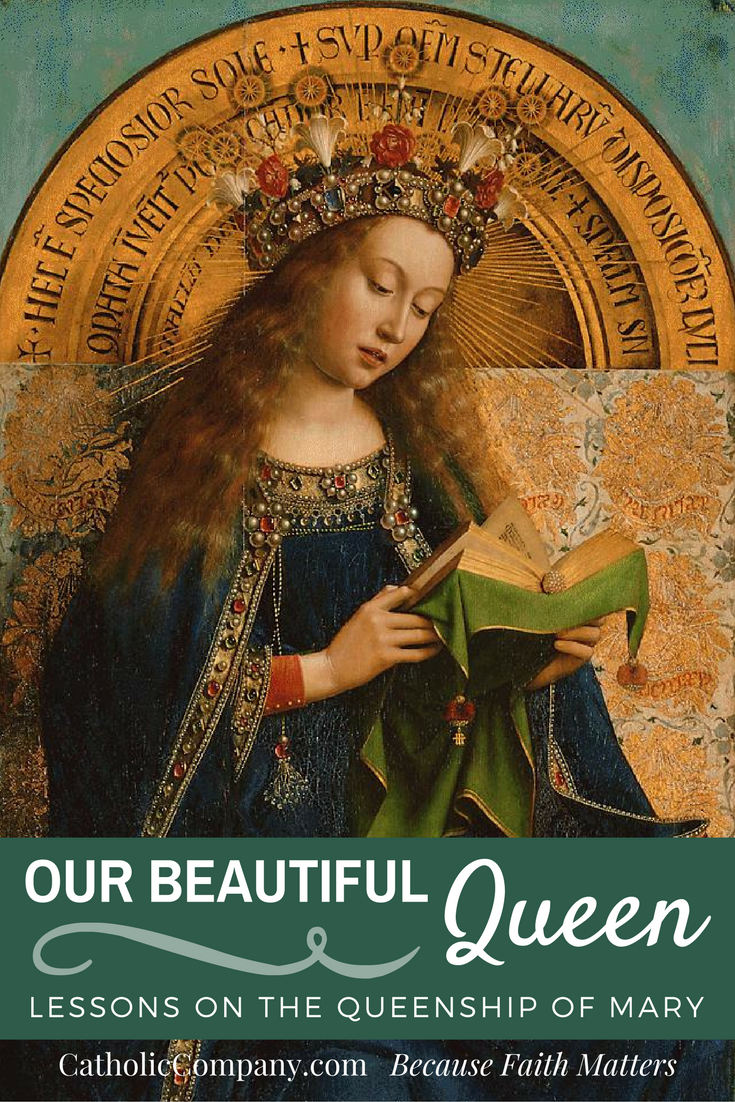